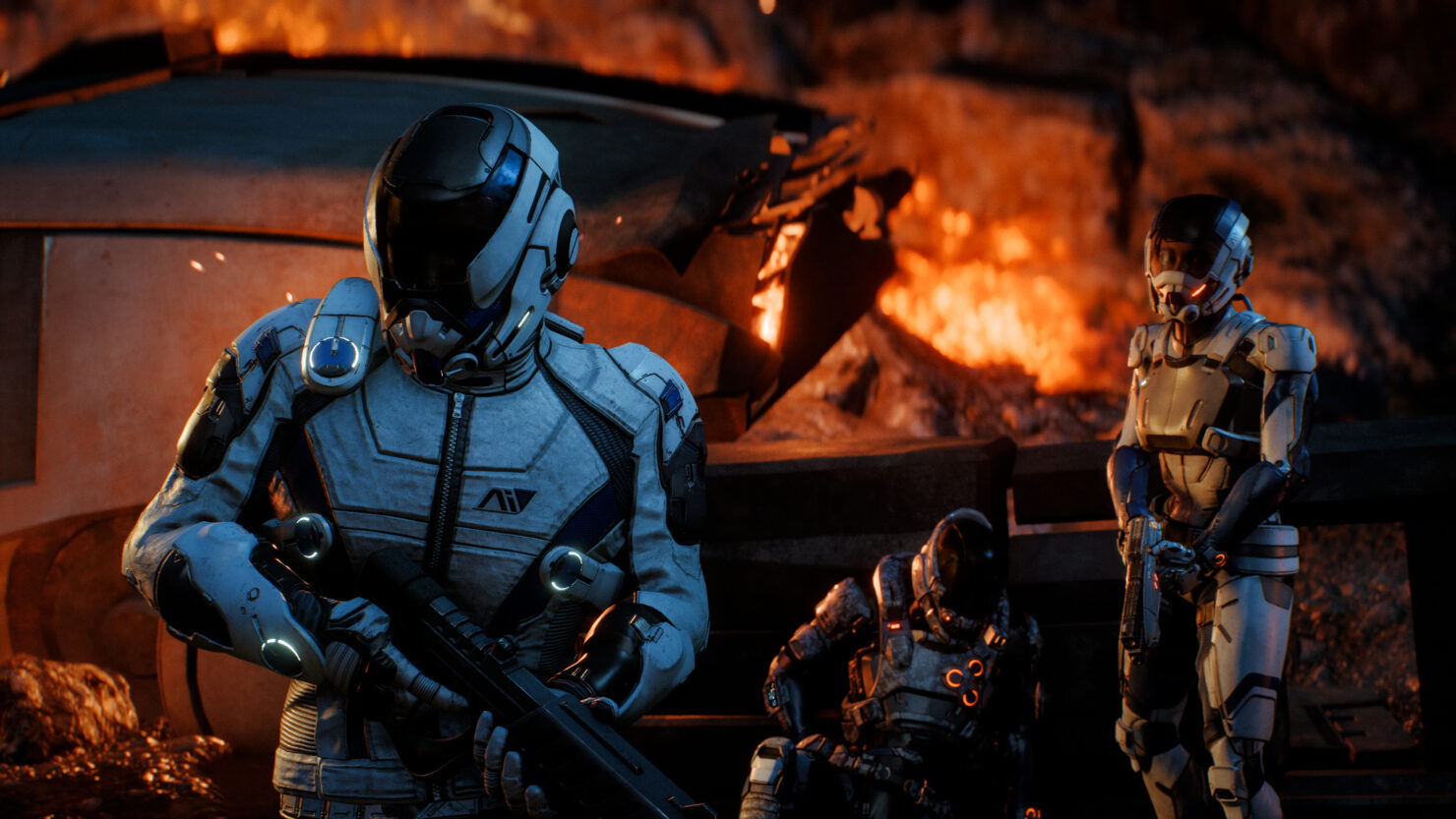 Microsoft had a packed booth at the Pax East 2017 show floor. One reason was that this was the first time Mass Effect: Andromeda's multiplayer was playable since the pre-launch beta got canceled. We had a chance to chat with Bioware’s Billy Buskell, Multiplayer Producer for Mass Effect Andromeda to share with you more details about the cooperative game mode.

Wccftech: Tell me a little about what’s going in Mass Effect: Andromeda's multiplayer. What is Bioware showing off on the Pax East Show Floor?
Buskell: We have a four-player co-op mode that’s building off what we had on Mass Effect 3, if you’re familiar with that mode. It’s four plays against waves of AI controlled opponents. The waves become more difficult as you continue with different objectives that appear each wave until you ultimately get extracted.
Today we are looking at a demo where are fighting the Outlaw faction which is one of the factions we have the mode. There’s three total but the Outlaws are the first enemy factions you’ll encounter when you play the game.

Wccftech: Could you give us some context as what exactly we are doing in these co-op missions and how it ties into the Mass Effect Andromeda single-player campaign?
Buskell: So Multiplayer is based on APEX Forces, as you go through the campaign you’ll discover a few characters that introduce the idea of the NEXUS militia called APEX. Terin Kandros is featured in one of our books is the head of those forces. He takes care of Apex, also known as our Strike Teams. We have this great new mode that bridges the gap between single and multiplayer called Strike Teams.
That’ll give you an opportunity to jump into the multiplayer if you wish and you can use the Strike Teams as an away team to complete missions. This gives the player a choice to take either join these missions themselves or send their team to take care of things while you play the single. Either way, this gives you a chance to earn sweet loot like missions funds or that could be used in both modes or Pathfinder rewards that you could send back your Pathfinder.

Wccftech: So if you choose not to engage in Mass Effect: Andromeda's multiplayer yourself, you can still reap some of the multiplayer benefits by sending out these Strike teams?
Buskell: It’s all about player choice. We heard a lot of feedback coming off Mass Effect 3 with how the campaign and multiplayer worked out with some lessons we learned from Dragon Age (Inquisition). We look for ways that we could reward players for playing the mode but if also if you don’t have the time to dive in, we don’t want to punish either which is why we didn’t tie any story to it. You can get the full complete story and narrative you want from single-player and if you want a little bit more gameplay and something to enjoy with your friends we have you covered.

Wccftech: How does sending out Strike Teams work in the single-player work? Is there a timer attached to each mission?
Buskell: If you’re playing the single-player and go to the Strike Team menu and send them off to missions. They’ll often have timers attached to those missions like 4 hours or 12 hours to complete the missions. Each mission has a chance of success percentage attached to it. If it’s a high success rate you may just want to send the Strike Team but if you odds that are around 50%, you may want to take part of the mission to ensure success.

Wccftech: Let’s talk about the different classes and races that are playable in co-op. It seems like there are some returning favorites like an angry Krogan.
Buskell: Each day at Pax, we are showing off four different kits (classes). When you start the mode for the first time, you have access to six human male and females characters. There are our starting classes for players to use. Then we start unlocking new kits, as you earn new kits by completely matches and using the credits to buy packs that will unlock characters, mods, boosters and anything else that will improve your success in the mode. You’ll see every characters that all under common, uncommon, rare, ultra rare rarities. We tried to find a good balance between different kit classes and see what would make a good rounded team but if you and your team just want to do a squad of Krogan, you have the freedom to do so.

Wccftech: Can we expect to see some of the other species like Batarians, even the Volus or Hannar appear as playable classes?
Buskell: (laughs) We’ve got nothing to announced right now at launch but we are always listening to feedback so you never know.

Wccftech: You touched on this earlier, but will players be able to use in-game and real-world currency to purchase these packs like in Mass Effect 3?
Buskell: Much like Mass Effect 3, if someone doesn’t have the time you have the choice to spend money packs. I have a family at home with two young kids so I can’t put the same amount of time in playing like other gamers. It’s important for us to make sure that everything is earnable through just playing. There’s no paywall. Time and money is interchangeable, you can accelerate the process by using Andromeda points to buy packs if you wish that contain XP boosters.

Wccftech: Speaking of boosters, I noticed that one of the biggest gameplay changes in Andromeda’s single and multiplayer modes are the inclusion of jet boosters. How has that changed your approach in designing these combat scenarios aside from adding verticality to the fights?
Buskell: It’s a ton of fun. As much I and Mass Effect fans loved playing Mass Effect 3 multiplayer, once we got to mess around with the jump packs and the boost, it was really tough to try to go back to how Mass Effect 3 played. Being able to boost and dodge adds a level of freedom to the fights. If you’re a Vanguard class, we are seeing a lot of players try for the first time is jumping up in the air and using a biotic charge which has been really fun to watch. Seeing players do big ground pounds from crazy heights that knocks enemies is also really cool to see people discover. The verticality and the jumping, the overall freedom of movement has changed so much just gives you different ways to attack an enemy. Let’s not forget this gives new ways to escape threats. In the demo here, we see the Outlaw faction using a giant mech, in previous Mass Effect games you would have you run around a corner and hope for the best. So if you were stuck in a long sight-line, you were in trouble. Now you can usually find spots to jump to and break the line of sight and regroup.

Wccftech: Lastly, what are the different customization options you’ll have for each class?
Buskell: The customization is similar to what you saw in Mass Effect 3 except we took it a little bit further this time. Before we just color swatches which left you limited to what you can use. This case we actually opening up a color wheel that lets choose shades and slider around the different color spectrum. We’ve messed around with different color teams for the show floor. You played an all black team because we wanted to go for a stealth-op. Upstairs at the Bioware Base, we’ve been showing Team 90s which featured a team of mostly purple, teal and bright pink. You got options go fancy or go with real silly color schemes.

Wccftech: Can you also customize any physical attributes on your characters like facial details, hair and whatnot?
Buskell: The character appearances in multiplayer are set so their appearances are what they are. The single-player has the in-depth character editor that you can use to customize your Pathfinder.

Wccftech: Thanks for chatting with us, Billy. Any parting words for anyone eager to play Mass Effect Andromeda?
Buskell: Thank you. And yes, EA and Origin Access Subscribers will be able to play the game early on March 16th where you’ll have 10 hours of access to Mass Effect: Andromeda's multiplayer and single player. All your progress will carry over if you decided to purchase the game. Andromeda will launch on March 21st in North America and on March 23rd in Europe.