It has been less than a day since Apple introduced the new iPhone 14 series, and turns out that the new iPhone 14 and 14 Plus are not really upgrades that you might be expecting. For starters, the phones are still using the chipset from last year, the wide notch, and a 12-megapixel main camera. One could almost say that the new phones are iPhone 13 with shinier clothes.

In Light of iPhone 14 Being Criminally Similar to the iPhone 13, Steve Jobs' Daughter Takes a Shot at Apple

It turns out that Steve Jobs' daughter Eve is also sharing similar sentiments as she has mocked the latest iPhone 14 on her Instagram. Eve decided to take to Instagram and shared a meme, making light of the new phones.

You can look at the post she shared below: 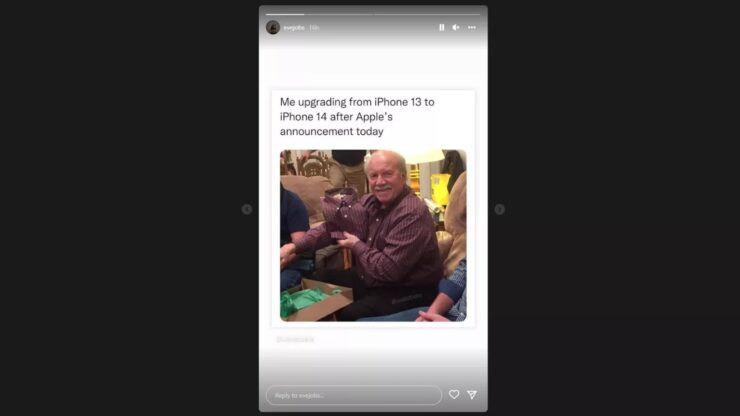 “Me upgrading from iPhone 13 to iPhone 14 after Apple’s announcement today,” the caption reads. The picture shows a man holding the same shirt that he is currently wearing, a common meme that we have seen a number of times.

Apple's standard iPhone 14 models do not get the same series of upgrades; you are missing the A16 processor, the display cutout, and the 48-megapixel camera, as well. You are also getting the same 60Hz refresh rate. Therefore, the vanilla variants are not much of an upgrade, in the first place.

If you are looking to get your hands on a new iPhone, the standard iPhone 13 variant that Apple is selling for $699 still makes a lot of sense. However, if you want to have the bragging rights to the latest iPhone, then the base variant of iPhone 14 is going to run you $799.

Are you upgrading your iPhone, or are you happy with your current phone? Let us know your thoughts below.