While Microsoft continues to step closer to the wild Xbox 360 software update this fall, some platforms have already started to roll out updates for their applications on 360. Today ESPN was updated to 2.0 bringing a whole lot of new exciting features for sports enthusiasts. The app will be available on August 25 just when the new college football season starts bringing the ability to watch multiple HD games simultaneously.  Pause one and watch the other. And how can you miss the mini guide with live thumbnails. How will they exactly look like and work? 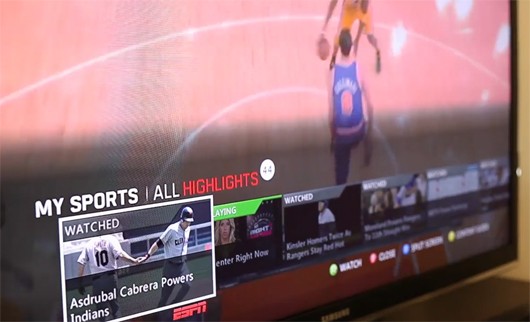 ESPN 3 is still going to be there so you can watch highlights and other live games covered by ESPN3 but the whole framework will be presented in a dramatically modified form. The whole Xbox Avatar Stadium has been vanished so it’ll be more like watching a real TV. Starters will be able to watch two games simultaneously in 720p HD, controlled independently by a remote or by using Kinect voice controls.  You can pause one and focus on the other or watch the replays on one and use the other one for live action or use both screens for one game; one for the replays and the other one for live action!

Furthermore, the most splendid feature is the way you’ll find what to watch. In the bottom half of the screen there will be a series of thumbnails acting as a mini guide with live scores on top of the title, acting more of a guide to what’s happening.  There will be a vertical live scoreboard on the screen as well (initially for football only but it’ll obviously expand over time).

A preview of the new app  is shown by Gizmodo in a video.

Well that’s how Xbox is actually planning to move deeper and deeper into live TV with the auspicious interface and design. Well one can predict that good days are not so far, are they?