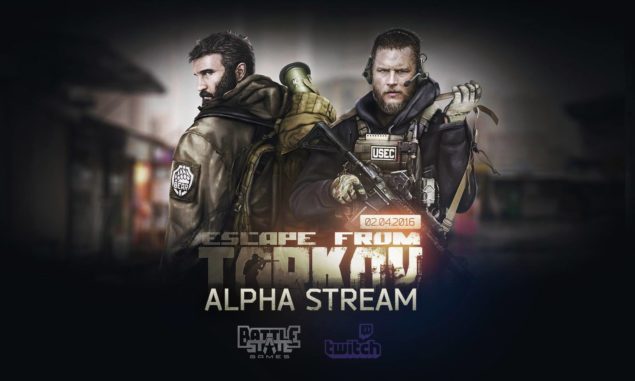 Russian developer Battlestate Games announced last month that Escape from Tarkov would begin its Closed Alpha test in March, after an official live stream, but that timetable clearly received a slight delay.

Yesterday, the first official live stream was announced on their Facebook page to be happening on Saturday, April 2nd.

Dear friends!
We are, just as you, eagerly waiting for the first live stream of Escape from Tarkov, where you will see with your own eyes, how the Alpha version of the project looks and plays like.
We are also happy to announce that, instead of one stream, there will be two, both live, at the different time; one for our Russian-speaking audience, and one for English-speaking.
Both streams will be broadcasted on our Twitch channel on Saturday, April 2nd.
https://www.twitch.tv/escapefromtarkov
The stream will be presented by the project lead Nikita Buyanov and Alexander "Kiba" Kovalchuk, with estimated running time of 1.5 hours.
We have tried to choose the time that would be convenient to the most of us:
The first stream - in Russian - will be broadcasted at 16:00 Moscow time.
The second stream - in English - will be broadcasted at 18:00 UTC (21:00 Moscow, 19:00 CEST, 14:00 EDT, 11:00 PDT).
Both stream replays will later be uploaded to our official Youtube channel.

In the meantime, Battlestate Games published a very short Alpha video teaser, showcasing once again the great graphics of Escape from Tarkov. The game is powered by Unity 5.

Escape from Tarkov is an online hardcore shooter chock-full of exciting features. Here's an overview shared by the developer:

Stay tuned on Wccftech for more about Escape from Tarkov.