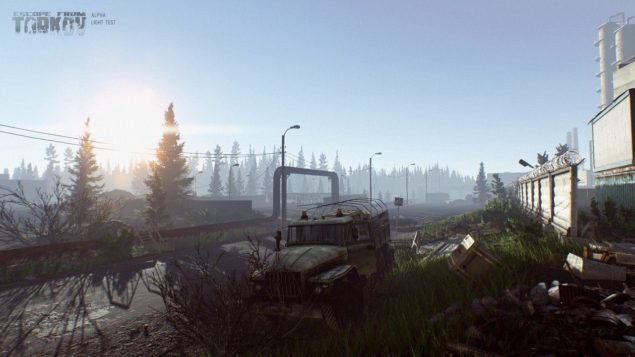 Battlestate Games went silent recently, but they've now posted a couple updates on their Facebook page to sate the growing thirst for Escape from Tarkov, their hardcore MMOFPS announced just three months ago.

The first one is the screenshot above (click to see it at full size), which shows once again that Escape from Tarkov can easily be counted among the most beautiful games made with the Unity 5 engine. The second update actually details the road ahead, with developer diaries being processed before sharing and a solid date for the public Closed Alpha test.

Dear users, please, be patient, we are working hard on the game.
Developer diaries are now being edited - we have tons of materials to process. The internal Alpha test has already started and we'd like to inform you that closed Alpha test will go public in March.
We will make a stream of the game right before it. We can't say specific dates, though, as work is still in progress. Alpha testing will be conducted in several waves-groups.
Alpha-testers will be mailed the Testing regulations and NDA later on for their information.

It seems like there's a slight delay in the schedule, then, since two months ago the developer mentioned a beta test coming in Q1 2016 (which ends in March) with the full release following in Q2.

If experience serves, we might now be looking at Q1 for alpha testing, Q2 for beta testing and possibly Q3 for release; a small delay could translate into a more polished game, though, so there's little room for complaint right now.

Escape from Tarkov will be launched on PC with a chance for a subsequent release on consoles and even VR support. Even in that case, the Russian studio reassured PC gamers that it won't compromise the game in any way to get it on consoles.