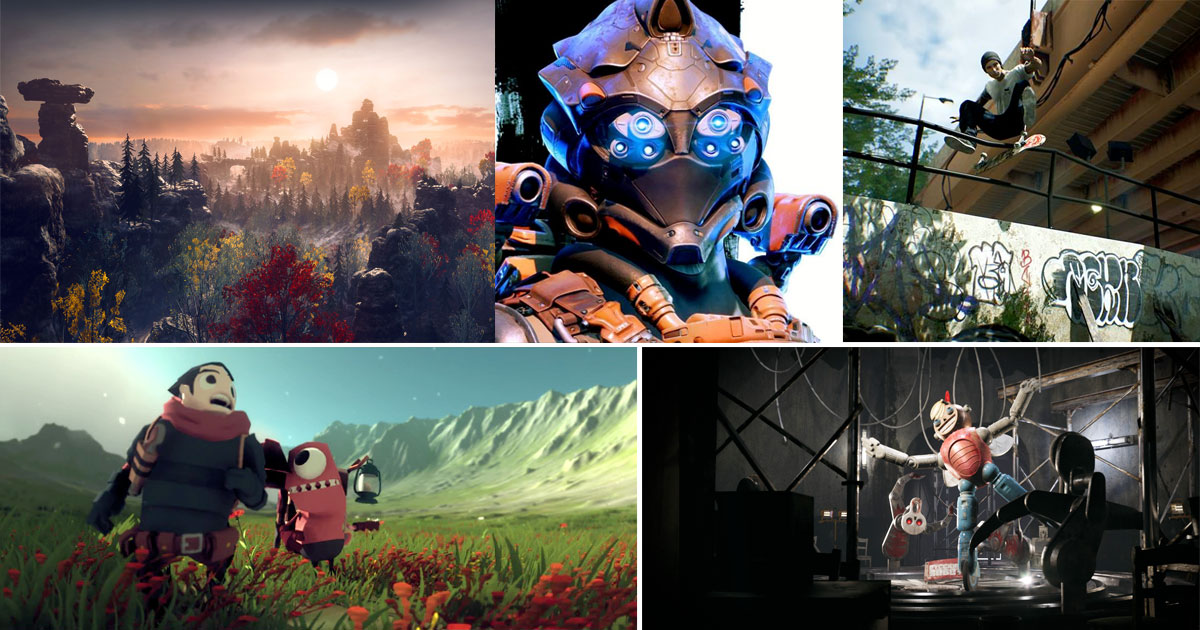 Epic Games revealed the winners of the latest round of Unreal Dev Grants, the program started in February 2015 where Epic Games picks promising Unreal Engine 4 developers and awards them funds ranging from $5K to $50K each.

This new round of Unreal Dev Grants is the biggest yet and we've embedded the long list of recipients below. Epic Games also unveiled the Unreal E3 Awards 2018, with Kingdom Hearts winning the Eye Candy and Biggest Buzz prizes while Mutant Year Zero was deemed the Most Engaging game, Concrete Genie the Outstanding Original game and The Forgotten City the Underdog.

Amid Evil by New Blood Interactive - Steam Page
In this 90s-inspired FPS adventure, players take on evil hordes with sacred magical weaponry and spells. Travel through seven distinct episodes to hone your skills against evil and reclaim your world.

Atomic Heart by Mundfish - Website
Atomic Heart is a first-person shooter that takes players inside an alternate universe during the high noon of the Soviet Union. Follow a Soviet special agent to unlock thrilling secrets and show the Motherland what you’re made of.

Brief Battles by Juicy Cupcake - Website
A hilarious platform fighter, Brief Battles uses underpants as a weapon. Players can choose from a variety of super-powered underpants and different game modes as they compete to see who has the mightiest buns.

Desolate Sands by Blacksmith Studios - Website
Desolate Sands is a VR puzzle game set in an ancient pyramid. The objective is to reach the bottom by leveraging nearby movable objects and levers to solve a series of complex puzzles.

ELLI by Bandana Kid - Website
In this puzzle platforming game, players travel as ancient time guardian Elli on a journey to recover the stolen sands of time.

Ghost by Sky Machine Studios - Website
Ghost is a sandbox stealth game set in a Victorian era world, where players seek to uncover the truth about Arthur Artorias’ past. In this game, light is the enemy – stay in the shadows and explore the darkness to survive.

Guntastic by Ludicrous Games - Website
Guntastic is an arcade-inspired game involving shooting and mayhem. Battle with up to four local or online players in fast-paced, one-shot one-kill, nonstop matches over continuously changing levels.

Headsnatchers by Iguanabee - Steam Page
Headsnatchers is a multiplayer party game where players each try to keep their heads on their shoulders while trying to remove everyone else’s. Play across four different game modes in over 25 unique environments, each with different rules and attributes.

Hear No Evil by Rockodile Games - Website
Hear No Evil tells the story of humanity’s last remnants, who return to earth to fight for their future. This game is a visually spectacular top-down action shooter inspired by Alienation and Helldivers.

Hellbound by Saibot Studios - Website
Hellbound is a demonic first-person shooter game inspired by classic 90s games like DOOM and Quake created by an independent team of developers in Argentina.

Kara Education by Kara Technologies - Website
Kara is an online education platform for children with hearing difficulties. The platform delivers educational material using an avatar, driven by Kara's AI and machine learning algorithms and Unreal Engine.
Kine by Gwen Frey - Steam Page
Kine is a 3D puzzle game about three whimsical machines that aspire to be musicians. Players embark across a theatrically rendered cityscape and solve increasingly difficult 3D puzzles to help the machines form a band and catch their big break.

Little Devil Inside by Neostream - Website
Little Devil Inside is an engaging 3D action adventure RPG game where players are thrown into a surreal environment with elements that challenge their survival instincts. Explore, adapt, and fight to survive.

M.A.S.S Builder by Vermillion Digital Co., Ltd. - Facebook
M.A.S.S. Builder pits humans against invading aliens in the fight for the Earth. Players will build, customize and control the ultimate M.A.S.S. (Mechanical Assault Skeleton Suit) in an effort to save the world.

Neon Giant - Unannounced Title - Website
Neon Giant is a group of game veterans with a experience in some of the world’s biggest action game franchises. The studio is hard at work on its first title, set in a brand new cyberpunk world.

New Reality Co. - Unannounced Project - Website
New Reality Co is a creative studio by Milica Zec and Winslow Porter, dedicated to synthesizing storytelling, art, and technology into groundbreaking and emotional projects. New Reality are the creators behind the award-winning Giant and Tree VR experiences, both of which are built with Unreal and previously benefitted from Unreal Dev Grants.

NotMyCar by NMC Studios - Video - Website
NotMyCar is a white-knuckle, lead-footed massive multiplayer vehicular combat battle royale game. Drop into the battleground and use cool weapons and abilities to fight your way through single-elimination combat and become the ultimate survivor. Customize your ride to make it a beast of a vehicle to take on anyone, anytime.

Oceanhorn 2 by Cornfox and Bros. - Website
Oceanhorn 2, which was showcased in the Unreal Engine booth at GDC 2018, is the upcoming sequel to the action-adventure mobile game featuring exploration in a colorful world with items, puzzles and battles.

Paradise Lost by PolyAmorous  - Website
Paradise Lost is a non-linear narrative driven adventure game with meaningful, kinesthetic interactions dynamically changing both the environment and the story you are experiencing.

The Path of Calydra by Finalboss - Website
The Path of Calydra is an 3D adventure platformer set in the fantastic world of Calygore. Explore as suburban teenager Matheus, who has been transported to Calygore and must rely on an unusual entity named Calydra to seek out four powerful crystals and return home.

Rocket Jockey by Burn Ward Games - Website
Rocket Jockey is a team-based game that plays like a cross between Rocket League and Super Smash Bros. Fly on top of modern jet engines with classic car chassis at break-neck speeds.

Second Order
Independent developer Second Order, creator of Claybook, is being recognized and awarded for contributing numerous fantastic rendering features and optimizations to Unreal Engine 4. This is the team’s second Unreal Dev Grant.

Session by Creature Studios - Website
Inspired by the golden era skate culture of the late 90s and early 2000s, Session is an upcoming skateboarding game that is all about authenticity, creativity and the freedom of expression that skateboarding provides.

SMALLAND by EMBU Games - Website
With SMALLAND, the survival genre gets a tinier take that lets you appreciate the little things, or flee in terror of the little things. The slightest breeze can sweep your items or even your house away from you. The simplest rainfall can form puddles the size of lakes in a matter of minutes.

Solar Warden by Polar Zenith - Website
Solar Warden is a six-degrees-of-freedom space shooter combined with an overarching campaign with real time strategy elements. Jump into your fighter and combat the silicoid menace up close, while you command and dispatch the Solar Warden fleet for reinforcements.

VStore by VitaeVR - Website
Vstore, which recently entered wide clinical trials, is a fully functioning virtual reality supermarket which offers a fast, accurate and portable method of screening for early indicators of dementia. Diagnosing dementia at the earliest possible stages is critical because that is when treatment is at its most effective.