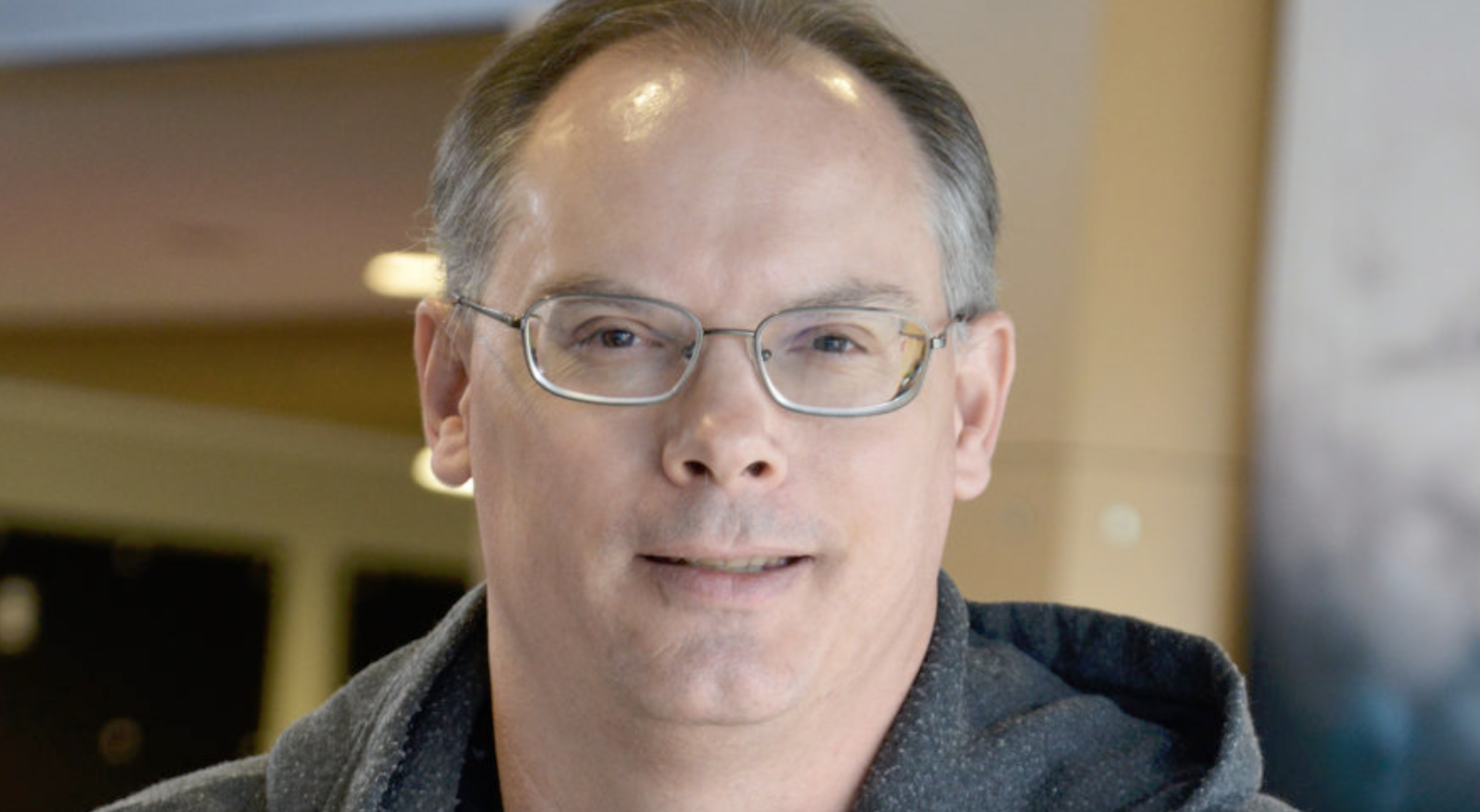 Tense relations between Cupertino tech giant Apple Inc (NASDAQ:AAPL) and game developer and store manager Epic Games took a new turn earlier today when Apple announced that it would stop Epic's Fortnite from being available on the App Store. The decision came following the developer's introduction of an alternative platform for in-game Fortnite purchases, a move that violates the terms and conditions to which developers are required to agree to once they choose to enter Apple's iOS ecosystem for the iPhone and the iPad OS ecosystem for the iPad.

Following the ban, Epic Games has escalated its tussle with Apple and sued the company in the United States District Court of the Northern District of California. Epic alleges that Apple's decision to restrict alternative software application distribution channels for iOS and its policy of restricting developers from providing alternate, non-Applemediums for in-app transactions violate the Sherman and California Cartwright Acts on a total of ten counts.

The company believes that due to the aforementioned restrictions, distributors are unable to develop new methods of distributing applications on iOS, developers find it difficult to remain fiscally healthy due to the 30% commission charged by Apple for both in-app purchases and for sales and users are stripped of access to alternates that, according to Epic, may very well end up providing innovative services that exceed in quality from the ones used by Apple.

Epic states bluntly that were Apple to remove the restriction that bars third-party application distribution on iOS, the developer would simply offer its own service for letting users download its products and conduct in-app purchases. Since the company is unable to provide these alternatives, it argues that it is 'forced' to charge higher in-app purchase prices due to the 30% fee charged by Apple for these transactions.

Excerpt from Epic Games' Complaint for Injunctive Relief filed against Apple Inc highlighting that by allowing an alternative in-app purchase platform (in this case developed by Epic itself) consumers can gain a 20% price discount.

In the suit, Epic cites its decision to offer an alternative in-app payment method in its popular game Fortnite as an example of the cost savings that consumers can gain benefit from were Apple prevented from exercising blanket control in the iOS App Store. Epic states that since its launch, more than 350 million users have played Fortnite, yet it does not provide the precise statistics related to iOS-specific users.

The developer also does not seek any monetary damages from Apple, with the only statement relating to monetary damages that it suffered from the iOS-maker's policies claiming that the damages exceed $75,000. It argues that the iOS application distribution market is a valid candidate for being considered as a marketplace and Apple maintains a monopolistic control on this market by preventing users from downloading applications from other non-App Store mediums, preinstalling the App Store on its iOS and iPadOS devices and requiring developers through the Developer Agreement to not distribute their products to users on iOS via any other medium than the App Store.

Epic also illustrates that the non-App Store mediums, such as Apple's TestFlight software for testing applications, Ad Hoc distribution for developers to distribute applications on their own devices and Custom App Distribution for corporate or educational purposes do not serve as adequate App Store alternatives.

Fortnite's creator believes that since Apple's power over the iOS application distribution 'market' is absolute, Apple has little incentive to innovate; with developers and users bearing the negative impacts of this in the form of "inferior distribution outlets". 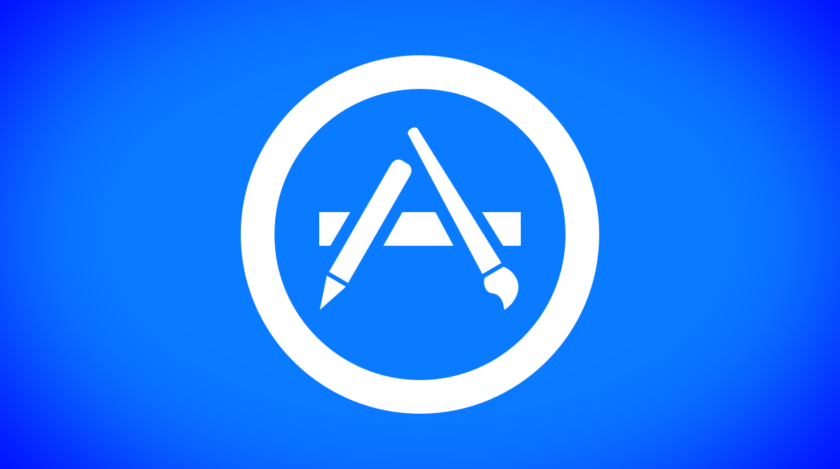 Logo of the iOS App Store

Epic's second concern is for the medium that process in-app payments within iOS. Pursuant to the Apple Developer Agreement, developers are required to ensure that all such transactions take place through its In-App Purchase. Apple argues that this is necessary to ensure that its commission makes its way to the right place and that user security and privacy standards are upheld. Epic believes that the restriction affects application user experience, with the developer arguing that it's necessary that users make the purchases inside the app, Otherwise, developers run the risk of the user simply opting to either not use the application in question or abandoning the said transaction.

The software house also provides evidence for Apple's absolute and monopolistic power by illustrating that other payment processing tools charge significantly lower commissions than Apple. The examples provided in the lawsuit are:

Epic goes on to state that in addition to being restricted to Apple's payment platform, developers cannot even inform users of any alternatives to the platform due to conditions present in the Developer Agreement. It argues that Epic's customers would not prefer to share their transaction-related information with Apple, and due to the Developer Agreement restrictions, Apple has no incentive to improve its services.

Apple's 30% commission also reduces application quality and affects user experience argues Epic, and that if Apple's service were the most secure and efficient, the company would have no problem competing with other payment mediums that it allows for in-app purchase of physical goods and services believes the game developer. 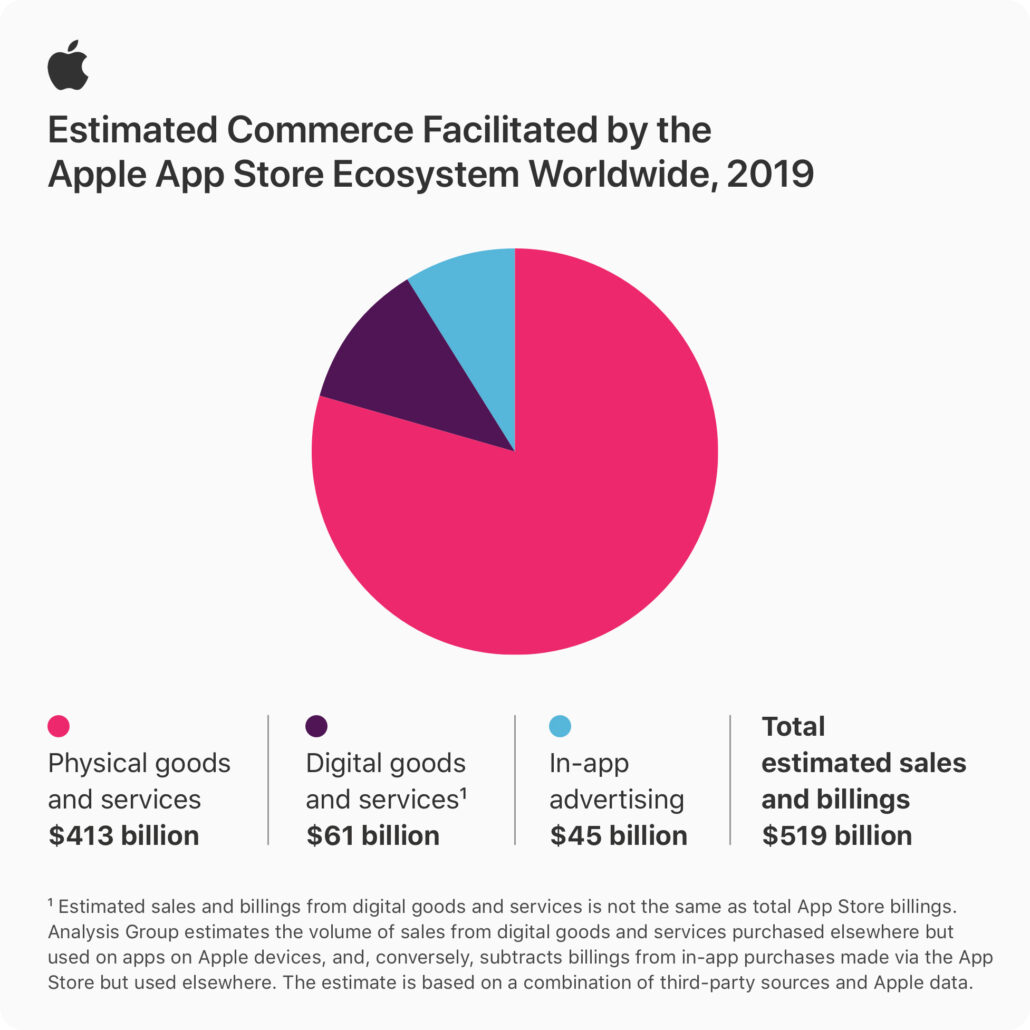 Apple revealed earlier this year that Physical Goods and Services, or those on which it does not earn a commission, accounted for 80% of the total spending through its iOS applications in 2019. (Image Credit: Apple)

In what is perhaps one of the most important point of Epic's lawsuit against Apple, the developer argues that if Apple's arguments of user experience and privacy were relevant for its monopolistic control over iOS application distribution and in-app purchase markets, then the company would adopt similar standards for the macOS app store. Users of Apple's personal computers are able to use alternate mediums to download and install applications, argues Epic, and this should be extended to iOS as well believes the company.

Finally, Epic believes that for both the 'markets' referred to in the lawsuit, Apple's monopoly is not threatened by Android devices due to the excessive costs involved in switching devices, user familiarity with iOS, the inability of a user to estimate the extent of the dollar amount that will be spent on applications, a lack of knowledge of Apple's uncompetitive practices and general apathy towards such practices when making a purchase. It also cites iOS user loyalty as a strong factor in letting Apple continue the practices by highlighting that users often simply migrate to pricier devices instead of migrating to Android when Apple increases prices as it did with the iPhone X.

As a result, Epic Games believes that the United States District Court of the Northern District of California should stop Apple from conducting these actions and declare such policies as unlawful.