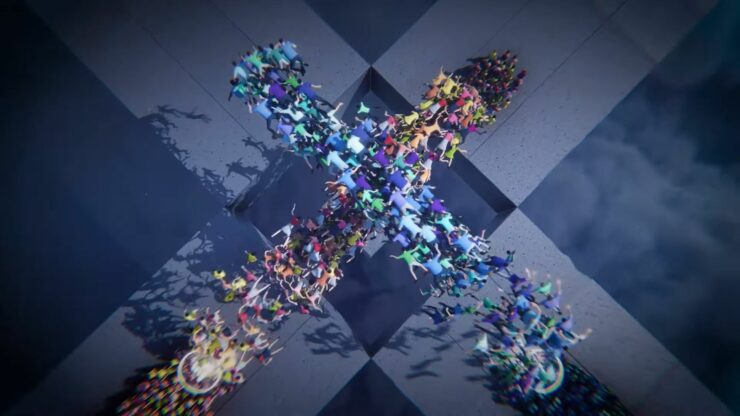 When all is said and done in 2020, at least it can be said that Humanity made it to 2021. That's true of the real world and the Tetsuya Mizuguchi-headed Humanity, from Enhance. Though the game was initially announced for 2020, it's now been delayed to 2021, as announced via the game's official Twitter.

Happy holidays, stay safe, and we'll see you next year.

The rather strange-looking game appears to follow an even weirder design philosophy. It follows thousands of small little people (humanity, natch) as they solve physics-based puzzles. They appear to be moving together like some sort of wave, or singular entity, and that's very cool on its own. It's said to have VR support, which should offer some very bizarre experiences as well

Still, there's a lot we don't actually know about the game just yet. Very few details have been released about the game or about what prompted the delay. Like many things this year, it likely has a lot to do with COVID-19 and the stress it has placed on ensuring things get done in aa timely fashion.

It looks like it could hold some promise, however, especially as Enhance is the very entity that brought us the goodness that is Tetris Effect. That game, and Mizuguchi's other works before it, are  nothing short of delightful, especially Rez and Child of Eden. So if Humanity shares even a fraction of that quality or inventiveness, we could be looking at a very interesting game here.

We'll keep an eye out for any additional delays or changes that occur with Humanity and keep you apprised, of course, such as a statement on why the game has been pushed back. It's certainly something we're all curious about, too.