A single separator (led) and a single-layer pouch cell (right) from a QuantumScape investor presentation. The company will have to manufacture thousands of these at a larger scale for mass production. Image: QuantumScape presentation

Earlier this week, Tesla Inc's chief executive officer Mr. Elon Musk shared his experience of ramping up production for his company's vehicles. Tesla, which has been infamous for its production problems, has only recently managed to regularly churn out vehicles from its facilities in the United States and China.

While made about vehicle production, the executive's comments illustrate how battery research firm Quantum Scape will find it difficult to achieve its goals of equipping the bulk of electric vehicles with solid-state batteries in the near future. Quantum Scape is currently researching a new separator material that separates its Lithium-metal anode from the cathode and acts as an electrolyte to shuffle the electrons back and forth in the battery.

". . .Those who have never done production don't understand how insanely hard it is," Outlines Musk At Tesla Investor Call

Musk's comments came in response to a question asking the progress of Tesla's manufacturing factory in Berlin, Germany, concerning a benchmark shred by the executive earlier postulating that a five to ten times improvement compared to the first Model 3 production line was possible.

Oh I think we're still quite far away from it. I mean the thing to bear in mind with production is, for those who have never done production they just don't understand how insanely hard production is. I want to be very very emphatic here. Protoypes are trivial. They're child's play. Production is hard. It's very hard. Now you say production at large scale with high reliability and low cost? Insanely difficult. What Tesla achieved on the automotive side was not to create an automotive car. The truly profound thing on the car side is that Tesla was the first American car company to achieve volume production in a hundred years and not go bankrupt. Basically, myself and many others at Tesla had several aneurysms to get this done. It was so hard to have no idea. And the thing about making a large and complex object is let's say you have first-order approximation, 10,000 unique items. And even one of those items is slow, that says you wait, just one. Doesn't matter how – so trivial. We've had production stop because of carpet in the trunk. We've had production stop because of a USB cable. At one point, for Model S, we literally raided every electronics store in the Bay Area.

For a few days there, nobody could buy a USB cable in the Bay Area because we went and bought them all to put them in the car, literally. And there's like hundreds of stories like that. So anyway, that....solving those constraints and a logistics problem that makes World War II look trivial. I'm not kidding. Like the scale is insane. We're talking millions of cars, massive global supply chain, 30 countries, dozens of regulatory regimes. It's insane. So yeah.

How does this apply to QuantumScape? The company is currently working on a prototype cell vastly smaller than the one which will potentially power a future electric vehicle. It's also developing a multi-layer version of this cell, which marks the first of many steps in scaling its prototypes to a fully usable battery.

It expects mass production to commence in 2024, hoping to be one of German carmaker Volkswagen's primary battery suppliers.

However, some of the problems that lie ahead of QuantumScape include scaling up its cell design to one involving a hefty number of layers and manufacturing its separator material in bulk. In addition, since the company has stated that its separator material (one which goes in between the positive and negative ends of a battery) is proprietary, Quantum Scape will likely need proprietary equipment to produce it.

Assuming that the final QuantumScape cell uses 50 layers, and 2,500 are needed to power a single-vehicle (Tesla's Model 3 has 3,700 cells with 50 to 100 layers), then per vehicle, QuantumScape will have to manufacture 125,000 layers of the separator. 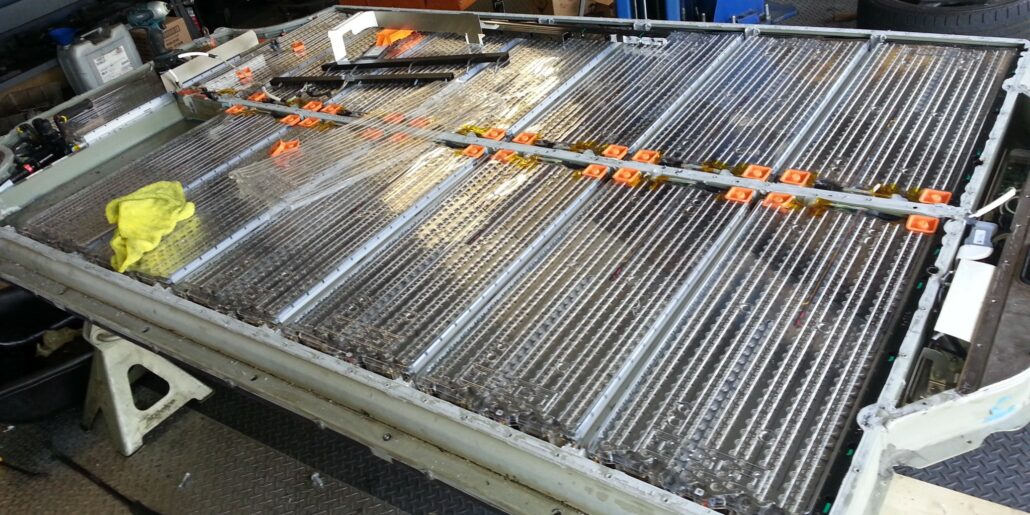 Further assuming that Volkswagen ships 20,000 electric vehicles (less than one-tenth of Tesla's 2020 shipments), QuantumScape will have to manufacture 2.5 billion separator layers simply to keep up with the German automaker.

Data from the company's multi-layer cell tests might not be available by the end of this year to adequately determine if it's ready to lock down the specification for the ceramic separator. If QuantumScape can close in on a final separator design by the end of this year, it will still have to deal with moving from a single-layer pouch 70mm x 85mm battery cell to manufacturing thousands of them for a single car battery.

Of course, since it's a publicly-traded company, QuantumScape has to disclose risks to its business to the Securities and Exchange Commission (SEC). So in its Forward-Looking Statements disclosure for its latest battery update, QuantumScape notes:

The Company faces significant barriers in its attempts to produce a solid-state battery cell and may not be able to successfully develop its solid-state battery cell. Building high volumes of multi-layer cells in the commercial form factor and with higher layer count requires substantial development effort. The Company could encounter significant delays and/or technical challenges in replicating the performance seen in its single-layer cells and early tests of the smaller form factor four-layer cells and in achieving the high yield, reliability, uniformity and performance targets required for commercial production and sale. The Company may encounter delays and other obstacles in acquiring, installing and operating new manufacturing equipment for automated and/or continuous-flow processes, including vendor delays (which we have already experienced[EMPHASIS ADDED]) and challenges optimizing complex manufacturing processes. The Company may encounter delays in hiring the engineers it needs to expand its development and production efforts, delays in acquiring the facility for QS-0, and delays caused by the COVID-19 pandemic.

All in all, QuantumScape has its work cut out for it, and future data for its multilayer cell needs to be closely scrutinized to gauge the company's long-term prospects.