Tesla and Elon Musk, the billionaire CEO of Tesla Motors, like to keep things rolling nicely with software updates and this is exactly what he teased about in a tweet, stating that he will make an announcement soon that will ‘end range anxiety’. 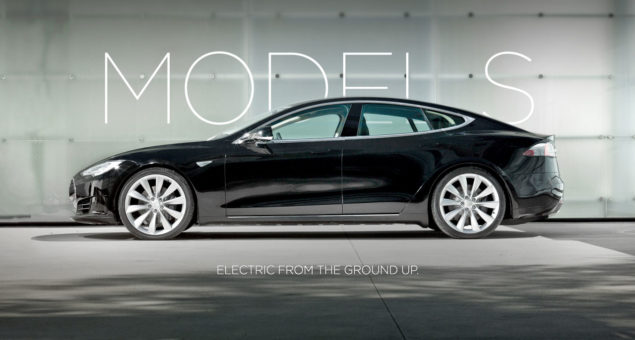 The announcement might be more than just about a range increase

The firmware update will be for the Model S vehicle that has been among the most exquisite cars made by the company. According to the tweet from a verified account of Elon Musk he said that Tesla will end range anxiety via an over the air (OTA) software update for all vehicles of Model S. Hardly anything else is known about the announcement and the software update, but we will find out much more in a few days. 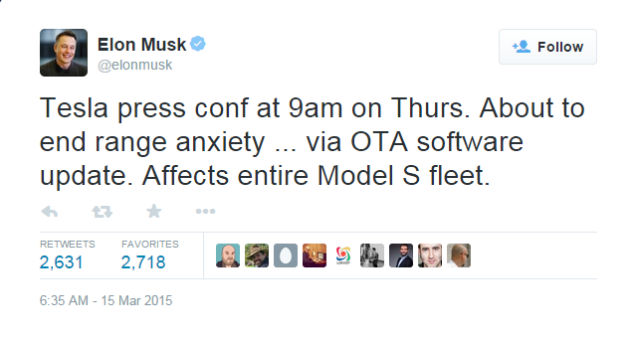 The range anxiety is obviously referring to the worry of drivers, when they are driving their electric cars, that whether they will make the trip whilst their car battery still remains. The constant stress about the battery running out is what everyone feels and so high speed chargers (the Tesla Superchargers) were made. But these are a few in numbers and scattered in different places, Tesla is working on expanding its Supercharger network because normal chargers just take too long to charge the car.

Now what exactly does Musk mean when he says that he will end range anxiety, it not a question of simply getting a few more miles out of the Model S’s battery by fine tuning the motor for more efficiency. That would still pose the problem of not being close to a charger every time you’re low on range and need a few extra miles. I have a feeling that the software update won’t just extend the desired range, it will have much more than that. There’s a reason they’re holding a whole conference and its Elon Musk we’re talking about, the man who has more tricks up his sleeves than almost everyone.

The simplest thing that could be done here would be a simple reserve that would be selected by the driver himself, in case you’re not near a charger and need another few miles to get to one you could just press a button that would release the extra miles ready for use. That would be possible with improved efficiency in the software that would squeeze out those few extra miles. But this may not be what is going to be announced because Musk always thinks out of the box, and he wouldn't want to update something that the driver will have to think about rather he’d install something that’s automated. The update could also be such that it calculates continuously the distance to home or a charger against the range left and gives a warning when the distance is more than the range left. Obviously this wouldn't help much but if the car gave a warning about low battery at different ranges left, say 100 miles then 50 miles etc. That would be much less stressful than giving a warning when you have nowhere to go and have only 5-10 miles left. This could be in the form of different colored indicators, with each color indicating a different level of danger for the driver.

These are all just assumptions but we will find out what Elon Musk has in his bucket of tricks this time, just a normal update wouldn't be something he would announce in a press conference. I suspect something big is on the way, more from this on this coming Thursday.