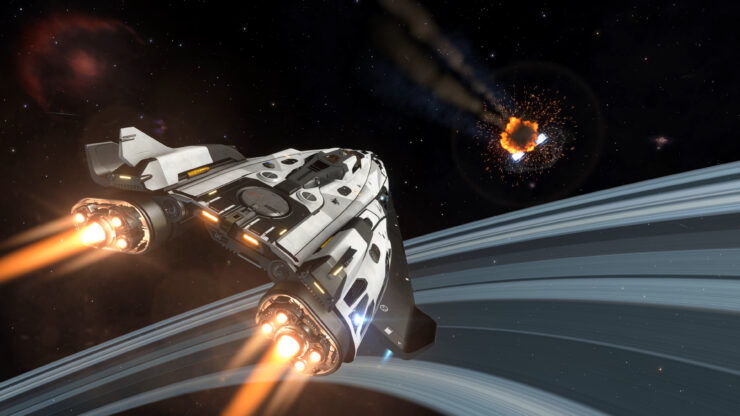 The Guardians lets Commanders install a fighter launch bay in larger ships and fill it with one of three different fighter crafts. These ships can be piloted by NPCs who will accompany your heavy frigate during battle. An extra ship at your side it always a good thing.

The new expansion will feature smaller yet important changes include some quality-of-life improvements in combat, trading and exploration. The most intriguing new gameplay mechanic, though, comes in the shape of passengers. The new career path allows Commanders to carry passengers by retrofitting their ships or piloting the new Beluga passenger vessel. You'll be able to transport VIPs and prisoners for profit, making you one step closer to becoming Han Solo himself.

The ability to recruit an NPC crew and to launch fighters seems like they're adding more layers to an already dense game. For a look at the entire changelog for Elite Dangerous: Horizons latest expansion, check out the Elite Dangerous forum. Elite Dangerous has come a long way ever since it announced planetary landings last year.

Every player will discover a galaxy filled with new wonders and new adventures in The Guardians, featuring neutron stars, capital ship dockyards, civilian installations and upgraded starport interiors. On planet surfaces Commanders will discover volcanic geology, ancient mysteries and unknown threats, all making the galaxy more immersive than ever before.

The new, more immersive galaxy is also easier to navigate. Explore using enhanced Galaxy Map filters, store modules and re-use them between ships in your fleet, transfer your vessels between distant starports, and visit the shady Interstellar Factors who will let you pay off your fines or collect combat bounties no matter where you find yourself in the galaxy.

The Guardians expansion pack is available now on PC for Season Pass (priced at $29.99) owners. You can even pick up both Elite Dangerous: Horizons and the Season Pass for only $59.99 on Steam today.