The update that adds planetary landings on 1:1 scale planetoids and objects for Elite Dangerous, Horizons, is now out and available in beta form to everyone who has pre-ordered it. 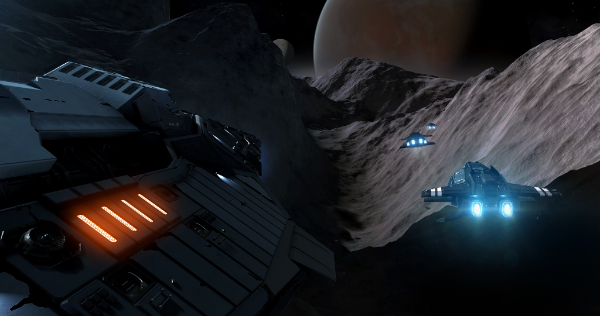 Horizons is more than just about letting you land on planets, however. It's also a season of expansions, as they're calling it, with more content than just that. The planetary landing portion is just the beginning and is the starting point for a whole new way to play Elite: Dangerous.

What can you do in the beta? You can journey through atmospheres, coasting over gorgeous vistas of mountaintops, dive into canyons and venture out on the ground in the new Scarab SRV wheeled vehicle, alone or with friends, all without loading screens or breaks in gameplay. Just remember that atmospheric flying is vastly different than in zero-G, and it's all modeled here.

There's plenty more coming in future updates as part of this Horizons. The idea is to realize the dream that David Braban has for Elite: Dangerous, which is a space simulator that simulates what life would be like as an explorer, a trader, resource exploiter and more.

And as ever, if you're going to partake, keep in mind this is a beta with all the wonderful and dreadful things that come with that. Participation and feedback all help to make for a better experience for everyone when it's finally released to everyone.