Electronic Arts (NASDAQ:EA) have delivered their results for the quarter ending December 31, 2020, and while the company has labeled it a “strong” quarter, the reality is, it was rather flat. Net revenue for Q3 2021 was $1.673 billion, just short of the $1.675 billion EA was expecting. That said, revenue was up a modest 9 percent year-on-year and net bookings, which include deferred revenue from live services, was slightly above guidance at $2.4 billion. Net income was $211 million, down over 60 percent from $349 million a year ago. Earnings per share are $0.72, above the $0.61 per share financial analysts were predicting. Nevertheless, flat Q3 results have sent EA stock plunging as much as 10 percent in after-hours trading. It should be noted that the stock was also up significantly earlier in the day due to the announcement of a new EA Sports College Football game (a no-doubt strategic reveal given today’s so-so results). 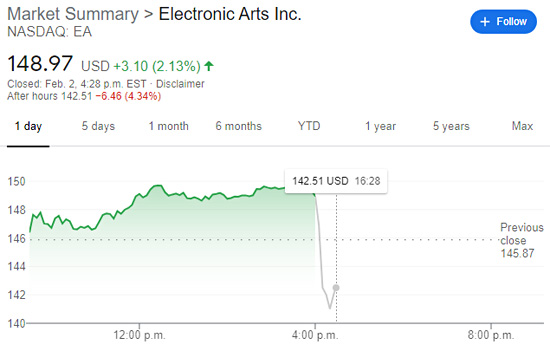 COVID-19 Immunity Begins to Wear Off

As we’ve seen throughout 2020, the COVID-19 pandemic which has thrown much of the world into disarray has actually been of major benefit to live-service video game publishers. That said, EA’s results this quarter prove there are definitely limits to that approach. Outside of their usual sports offerings like FIFA 21 and NHL 21, EA’s Q3 release schedule was unusually light, consisting of only Star Wars: Squadrons (a budget-priced space combat game), Medal of Honor: Above and Beyond (a VR-exclusive), and Need for Speed: Hot Pursuit Remastered.

Of course, EA’s reliable live-service standbys continued to do well – FIFA Ultimate Team logged a record 6 million daily active players in December, and the Apex Legends playerbase grew 30 percent year-on-year – but without compelling new software to back them up, they couldn’t quite carry the load on their own. Maybe earlier in the pandemic when hunger for time-sink live service games was particularly strong, Apex Legends and Ultimate Team would have been enough, but it seems that’s no longer the case.

Battlefield to the Rescue?

In the short term, things continue to look somewhat barren for Electronic Arts. The company has dialed back its FY2021 guidance from $5.625 billion to $5.6 billion (although net bookings should actually increase), and expects Q4 2021 revenue of $1.317 billion and a net loss of $19 million. This is partly due to an upcoming income tax charge of $152 million, but it also reflects the fact that EA still won’t have any major games to release in Q4. It Takes Two, a quirky new platformer published through the EA Originals indie label, is the company’s only scheduled release and likely won’t do particularly big business.

That said, there is some reason to be more optimistic about fiscal year 2022. While EA hasn’t nailed down many release dates yet, today they specifically promised a new entry in the Battlefield series in FY2022 (a holiday release is likely). EA is also talking up their recent purchase of publisher Codemasters, which will allow them to release yearly, high-quality racing content going forward. Additionally, Mass Effect: Legendary Edition (a collection of the franchise’s acclaimed original trilogy) drops in May and there are persistent rumors another Star Wars game may arrive before the end of the year. Of course, COVID-related development delays may affect release dates, but during their earnings call EA CFO Blake Jorgensen insisted Battlefield development is “way ahead” of schedule. EA CEO Andrew Wilson did his best to frame the company’s most recent results in a positive light…

We’re bringing great entertainment to hundreds of millions of people all over the world. Our amazing teams continue to deliver exceptional, high-quality experiences as more players connect with their friends and engage deeply with our games. With our expansion plans for EA Sports, strong catalogue of owned IP, leading live services, and ability to span every platform, we are growing to reach an even larger audience.

Long-term, Electronic Arts is still in a very solid position with it’s strong stable of IPs and live-service earners. That said, their latest results may show the extraordinary effects of the COVD-19 pandemic are starting to dissipate, and it’s time for big publishers to get back to the business of, well…publishing big games. Hopefully, EA can deliver in 2021.