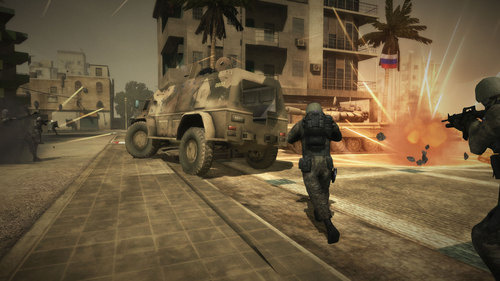 As expected, EA today revealed a new title in the Battlefield Series, Named "Battlefield Play4Free" its a free to play Online Multiplayer First Person Shooter game. The game features photo-real characters, environments, weapons and maps. The game features lots of new vehicles for vehicular warfare and allows 32 players to play online at once in a sandbox based map. Check out the teaser trailer below:

The game combines the Vehicles of Battlefield 2 and Modern Weapons of Bad Company 2, giving a totally new gaming experience. Players have access to 16 vehicles including the Mil Mi-28 attack helicopter, its nemesis the F35 VTOL jet fighter, the massive Russian T-90 main battle tank, and the hard to catch LSV light strike vehicle. Players will have to progress through the game which will unlock then new combat moves and in-game currency which can allow you to buy from a wide range of weapons of equipment.

The game will be launched in Spring 2011 on the PC and till then you can sign up here for Battlefield Play4Free beta to be released on November 30.