Perhaps the unintended star of the show was the three booths allowing for different perspectives on the gameplay for Battlefront. I was most excited to get to enjoy finally getting a real hands-on experience for my own most anticipated title of the year.

Battlefront plays differently than Battlefield, but the underlying mechanics make for a surprisingly incredible experience.

A disclaimer, no video or photos were permitted, so this is purely a description of my experiences.

Three different experiences were available to play, a massive multiplayer experience, a foray into co-op and even a mock X-Wing cockpit fully immersing you into the flying experience. I could only choose one due to time, so thought best to try the co-op experience, which is purported to be the only type of single player experience there.

It was myself and Rory Ross, an actor and gaming enthusiast from the Seattle area. We stepped up to the PS4 and took hold of the controllers, unsure of what really to expect. A small intro movie played, showing the events preceding the gameplay. We’re on Tatooine and were ambushed, escape pods landed everywhere that we have to find and secure until the contents can be recovered. We got to choose between three different weapons, a BlasTech E11, BlasTech A280 or a BlasTech DH17 pistol. We also had the option of choosing between two skill sets. These give you a special ability and two equipment slots.

Mind you, I’m not very good when it comes to first-person shooters on console. I’m not used to using a controller at all, so my performance was terrible. Rory Ross on the other hand? He saved me on several occasions. I’m a very large Star Wars fan, so I understand the apprehension with the upcoming title. Are they going to ruin it? Is their vision truly in line with what we, the fans, want?

Star Wars Battlefront was a surprisingly entertaining and fun game that seems to actually embody that which the hardcore fans want. It’s differentiated by more than just a few models, textures and a fresh coat of paint. I too was worried that it was going to be just Battlefield with the Star Wars label slapped on it. But I was completely wrong in that assumption.

It actually feels like Star Wars. Running blaster battles combined with the sound effects we all know and love, the music and even the banter from the Stormtroopers make for a very immersive Star Wars experience. It's different in all the right ways thus far, and

And the AI is really quite smart. At one point some Scout Troopers were able to successfully evade detection, moving their firing position often and trying to pick us off. Oddly, their aim seemed perfectly fine, as did the Stormtroopers aim. That and they weren’t shy about using a little strategy to try to flush us out.

Near the end of our six round preview AT-ST’s landed and started to come toward us. Blasters had an effect, but very little. You can, however, pick up concussion missile launchers to help, or fire concussion grenades as well. They loomed over us intent on stopping any resistance, lucky for us we destroyed them just in time and saved the day. The Rebels were victorious. 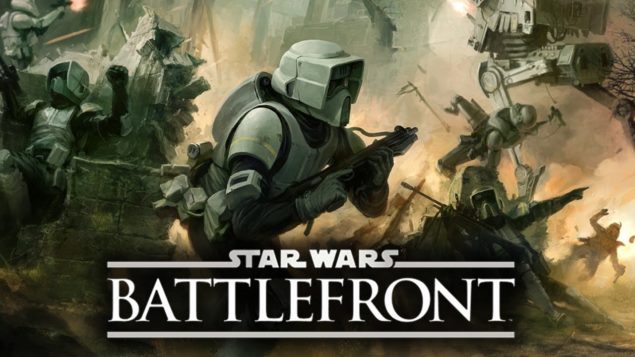 You come away from it feeling like you were a part of the universe for a bit. The updated visuals and using the Frostbite engine definitely help in that regard. But it was actually quite thrilling. If this is any indication of the final product, then it might just be the marriage of Star Wars games that we’ve been looking for for some time.

Talking to a DICE employee at E3 confirmed that what was playable was indeed very close to the final product, meaning that they’re just now putting on the finishing touches to make it an even better product. I don’t think that they take their responsibility to the Star Wars franchise and to its fans lightly. EA may not be liked for several legitimate reasons, but I don’t believe that this will be one of them. DICE has a good record as a developer (Battlefield 4’s launch notwithstanding), so I’m very excited about the final product.

Right now it's appealing from a short demo, but that doesn't mean it'll remain so. This certainly doesn't mean that Battlefront will be the final solution to everyone's Star Wars game problem. Quite the contrary, there are things that might seem a little too similar to Battlefield, or perhaps the lack of a true single player campaign or even space battles will be off-putting. But regardless, don't make a snap judgement yet. Of course wait for the reviews to come out and perhaps even planning on trialing it from a friend who is certain to have it.