[UPDATE] Ubisoft's Division team has posted an update on the official UBI forums, stating that they are aware of the missing characters issue. The source seems to have been identified, and a fix will be released soon. Characters on the affected accounts will be restored to April 12th, but all progress made since then will be lost. Read more right here.

[Original] Yesterday, The Division has received its 1.1 patch, which introduced plenty of changes as well as additional content. Following the short maintenance, however, players have had to deal with a variety of issues that are making it difficult to enjoy the game. Some, on the other hand, have obtained new content that has yet to be unveiled officially. 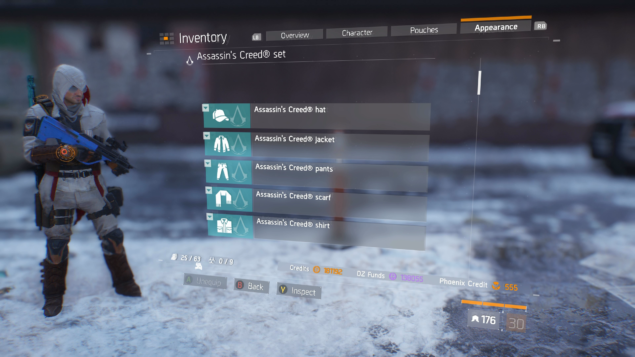 A couple of users have confirmed that they have received two special The Division outfits based on the Splinter Cell and Assassin's Creed series, outfits that have replaced the ones their character were wearing. A couple screenshots of the outfits, as well as a video, have also been shared, and you can check them out right below.

While The Division 1.1 patch has come with several issues, it did fix one of the more annoying issues that locked some players out of the game, the infamous backpack glitch. Ubisoft Massive required more time than most expected to fix the issue, as the root of the problem was quite complex.

As already mentioned, those who are playing The Division on Xbox One might have to deal with a rather serious issues. According to several reports, some players have completely lost their characters. Upon login, players are greeted by an error and brought back to the starting screen. The team has yet to say anything about the matter and a possible fix, but we will surely hear more soon enough.

The Division 1.1 patch includes plenty of new features, gameplay tweaks and more. Among the new features is thefirst Incursion called Falcon Lost, new Gear Sets, Trading, Assignments and much more. Plenty of changes have also been introduced to Crafting. You can check the official 1.1 patch notes out by going here.

The Division is now available on PC, PlayStation 4 and Xbox in all regions.