Some new combat footage of the game appeared, and it seems Ninja Theory went ahead and completely revamped the style meter and ranking, the game play LOOKS easy but maybe its more difficult than it looks? For now the combat looks like it could be a hit or a miss for the players but maybe Capcom is aiming for an easier control scheme over making a challenging, complex combo system making it easier to pull off SSS Rank combos in no time for the amateurs of the series or the new comers? Whatever it is I hope that it has a good story to back it up. 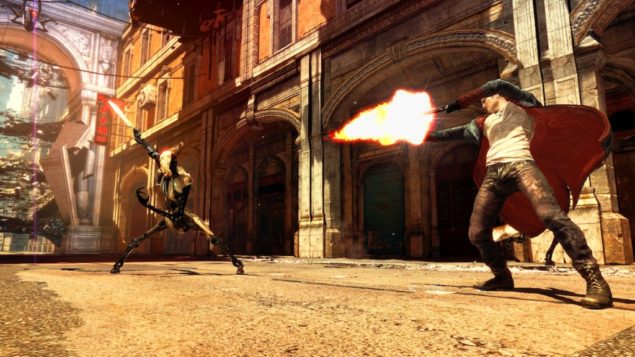 Devil May Cry is getting a reboot Courtesy of Ninja Theory, while the studio had a very rough start at first and met with negative responses from the community they were able to get their act together in the nick of time and improve the game where they felt would earn back the fans love. While the latest combat gameplay was done by an extreme combo beast or a casual player is not known but what it does show is possibly simpler gameplay and a much more easier control scheme which means that Ninja Theory is possibly aiming for something which anyone and everyone can play so that even the most newest fans of the series can comfortably pick up a controller and do SS / SSS combos within a few minutes.

So far Devil May Cry looks like a huge gamble to me, it can either be a great hit or it can earn the hate of the Capcom fans if they feel the game isn't what they wanted. For now I am hoping that the latter doesn't come to be and am keeping my fingers crossed for an amazing game experience which I haven't felt since the Original Devil May Cry on the PS2 which was an instant classic for me.

So far I love the finisher technique which shows Dante slicing up his foes from various angles, this is something I have seen in rare games such as Bayonetta and Viewtiful Joe and have to say I am really a fan of these kinds of finishers, this is one thing which I can truly give Ninja Theory a thumbs up for!