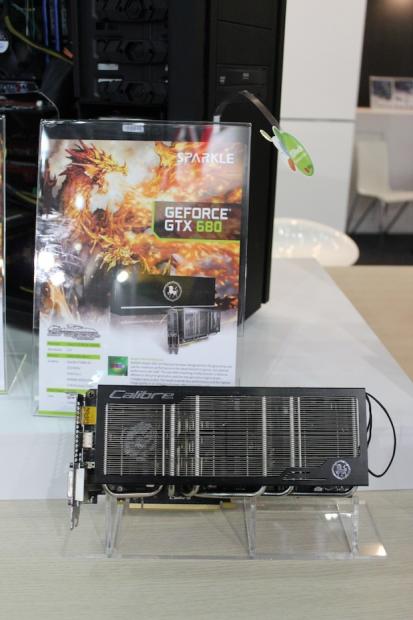 You might remember the Sparkle GTX 680 Calibre press release we covered, of it having a new cooler, very similar to a Gainward Phantom edition cards. The card was showcased at Computex with more details now available.

The Kepler based GTX 680 Calibre comes with 4GB of GDDR5 memory, along with a triple fan cooling solution. The fans being low rpm are sufficient enough to cool off the card while being somewhat be less noisy.

The card will be available with factory overclocked clock speeds with the base clock set at 1060/1080 MHz (image seems blurry to tell the exact clock speed). Although if compared to the Gainward Phantom, the material used on the heatsink seems to be or a mere low grade quality and rather flimsy.

Airflow however should be a problem for the card as the heatsink overall is of an open air design.

Release dates are supposedly around the end of June or earlier as pre orders for the Sparkle GTX 670 have already started.