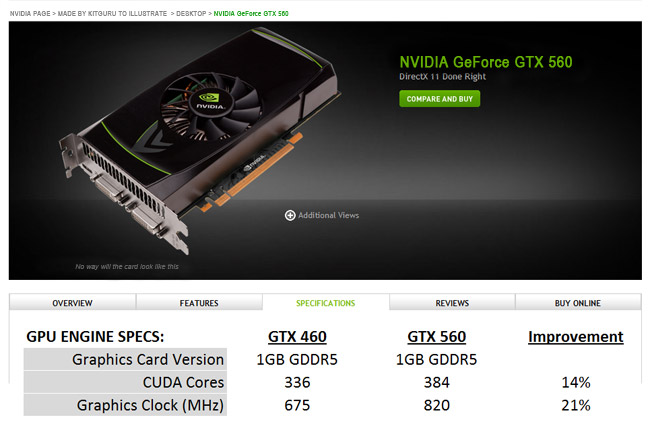 A few details of Nvidia's upcoming Performance Segment GPU "GTX 560" have been revealed. The card which is the successor to GF-104 based GTX 460 will be launched on 25th January and a few details have already been shown on Nvidia's website and you can check them out in the picture posted above, It uses the same cooler while packing 384 Cuda Cores (14% more than GTX 460), and 820 MHz core clock (21% higher). (The card will not be the same as the one posted above) :p

Nvidia is trying to bring the card in the sub-$270 "performance" segment which AMD has dominated after the release of its HD6800 Series GPU's and now its also planning to release newer models of HD 6950 and 6970 with cost effective boards which will also drop the prices of both of the cards alot. Nvidia might be cut the price of its card later but it's still unexpected. Some Performance details also show that the card is faster than both the current HD 6800 Series cards while being a bit slower than the HD 6950, You can check out the 3D Mark Vantage scores below: 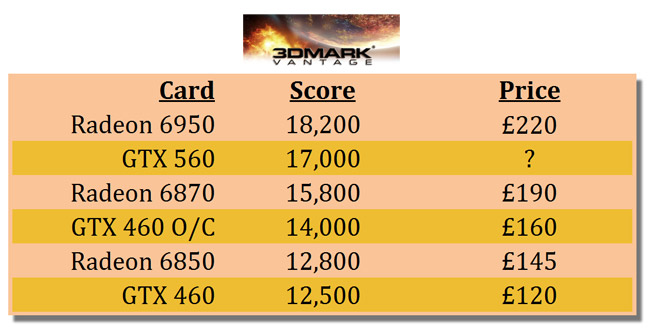 More details on the upcoming Geforce GTX 560 below: