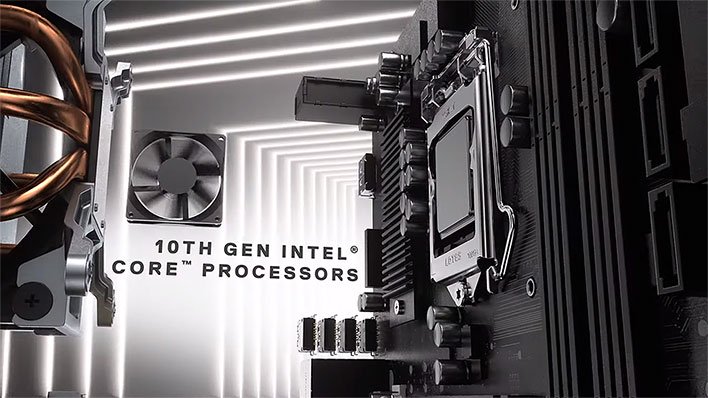 Intel's 10th generation Comet Lake CPUs are seemingly right around the corner. These processors are planned to take on AMD's Ryzen 3000 series chips. According to a YouTube video (which has been privatized), Dell has shown these processors are planned to be installed in the latest XPS Tower desktop computers. The exciting part is that Intel has not officially announced any 10th Generation Comet Lake CPU as of yet.

"Create without limits using the all-new XPS Tower. Featuring powerful performance, a minimalist design, and a highly expandable chassis," Dell writes in the video's description, this video has hence been privatized. While it usually is bizarre to see OEM manufacturers have unreleased processors, but with the close relationship that Intel and Dell have makes this fact less surprising.

Intel has already released X-series chips, including the 10th Gen Core i9-10980XE with 18 cores; however, these CPUs are targetted at the HEDT platforms and not mainstream platforms like the LGA 1200 socket which will house the 10th Gen Comet Lake-S CPUs. The 10th generation of these chips is a crucial component in Intel's fight against AMD's third-generation Ryzen lineup, and this included the $499 flagship 12 core/ 24 thread Ryzen 9 3900X. Intel's Comet Lake processor lineup is still going to be using Intel's 14-nanometer process, which is a huge disadvantage compared to AMD's 7nm Ryzen CPUs.

The XPS Tower is built around offering both good hardware at competitive pricing, and this tower is wrapped in an unassuming packaging. From what was shown in the video, the 2020 refresh of the XPS tower will modernize the design, while still allowing for easy upgradeability ( or as Dell's named it "infinite upgradeability"). The video also shows off the inclusion of GeForce RTX graphic card options with support for graphics cards that draw up to 225 watts of power. Sadly, this rules out the GeForce RTX 2080 Ti and GeForce RTX 2080 Super, which both draw at a maximum of 250 watts, but the standard GeForce RTX 2080 is below the 225W mark by just 10 watts.

The Comet Lake processors will scale up to Core i9 10 cores and 20 threads, this series of processors will also include a Core i7, Core i5 and a Core i3 option, all of these processors are announced to have hyperthreading.