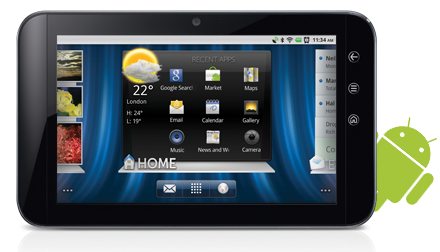 The 7" Dell Streak 7 tablet was supposed to get the Honeycomb update on October 7th but it seems the update is rolling out earlier than expected. First launched this March, the device is powered by Nvidia's Tegra 2 platform with a dual core A9 processor and ULP Geforece GPU and runs Android Froyo 2.2. Other specs include 5MP/1.3MP cameras, HSPA+ capability, 16GB internal storage a 2780mAh battery.

Currently a number of Streak 7 UK owners are getting the update, so we aren't sure if the update is limited to the UK or a global update. The device did not get Honeycomb at release, since at that time Honeycomb was supported for 1280 X 800+ resolution devices whereas the 7" screen on the Streak 7 is just 800 X 480 pixels. So its good news for owners of the tablet that they can finally experience Honeycomb which is designed for tablets whereas Froyo is intended for smartphones. However some people are reporting that the Honeycomb experience is not ideal due to the low pixel density on the Streak 7. For a tablet 800 X 480 is a bit low considering even smartphones are now coming with qHD and Semi HD displays. There also reports of devices having their data  wiped after the update, this is entirely possible considering the nature of the update so make sure to back up your data before hand. Still if you have one of these, check out the update and tell us wether Honyecomb 3.2 is usable on the Streak.