It appears that things have started to heat up in the tablet market. With the launch of the Nexus 9 coming with the Tegra K1 on board, things were never going to be the same again in terms of computing power. Not willing to stay behind, Apple took things to the next step but debuting the iPad Air 2 which was not only the world's thinnest tablet, but also came with the tri-core Cyclone A8X on board, which is a first of it's kind.

Looks like Apple and Google are going to be joined by a new competitor pretty soon in the battle for your hands. Dell has just posted details on site which confirm that it's Venue 8 7000 will become available starting the end of November. The device, showcased by the manufacturer last month, will be 6.0 mm thin. 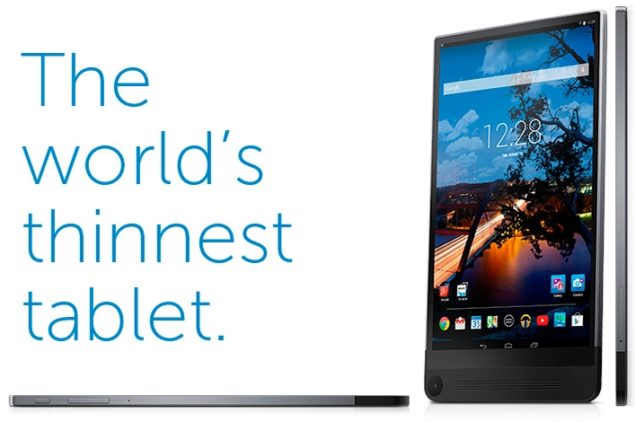 The Dell Venue 8 7000 will be a mere 6.0 mm thick, effectively taking the title of the world's thinnest tablet away from Apple's iPad Air 2. But this isn't the device's only defining feature. The Venue 8 7000 will come with the Intel Atom Z3500 on board, which is a series of  low power processors utilizing the Merryfield core and capable of achieving frequencies of up to 2.33 GHz for the Z3580.

In addition to the Z3500 series, the Dell Venue 8 7000 will also come with not two, but three camera on board. The primary 8 Mp rear shooter will be supplemented by two additional cameras on the device's rear which will enable 3D photography and video capture using Intel's Real Sense technology.

Screen size for the Dell Venue 8 7000 will be 8.4 inches with a resolution of 1600 x 2560 pixels. The device will be available in the US starting November and will come with a price tag of $499. Sounds impressive? Let us know in the comments section about what you think.