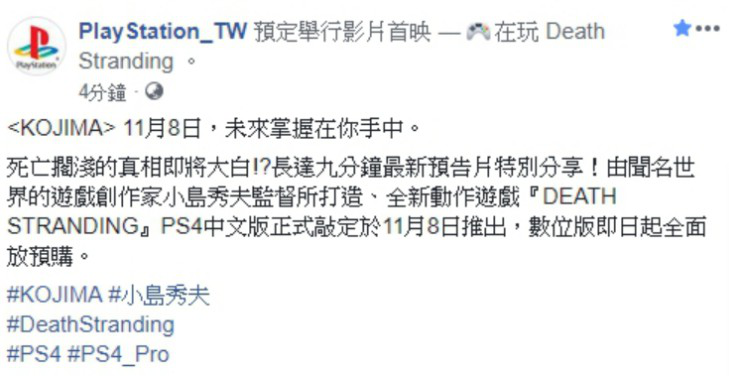 [Original Story] Hideo Kojima's Death Stranding has been in development for a very long time, but it seems like the game is now very close to release, considering a new trailer is likely coming later today. The game's pre-order page briefly appeared on the PlayStation Store, hinting at the fact that a release date is going to be announced soon.

A few hours ago, Italian journalist Antonio Fucito revealed with a tweet that the game may be released on November 8th.

No additional information has been provided regarding this release date, so we have to take everything with a grain of salt until an official confirmation comes in. Thankfully, we won't have to wait too long, as more on the matter is likely coming in a few hours.

As of now, we know very little of Death Stranding. All of the currently known details on the story have been provided by a short official summary released a while back.

Sam Bridges must brave a world utterly transformed by the Death Stranding. Carrying the stranded remnants of the future in his hands, Sam embarks on a journey to reunite the shattered world one step at a time. What is the mystery of the Death Stranding? What will Sam discover on the road ahead? A genre defining gameplay experience holds these answers and more.

Death Stranding launches on PlayStation 4 on a yet to be confirmed release date.