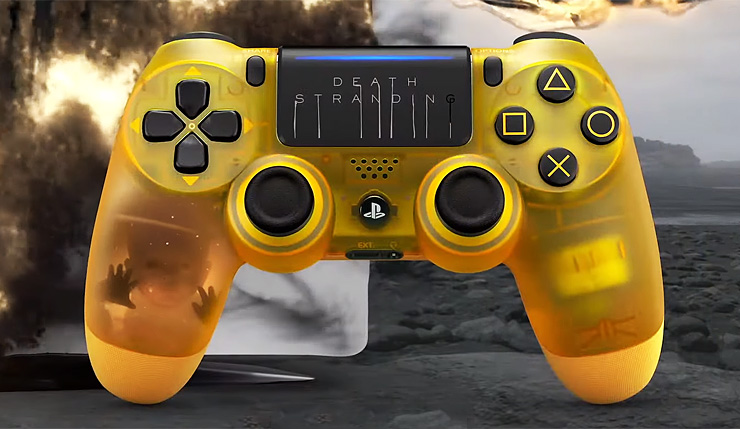 Death Stranding is pretty much guaranteed to be this year’s biggest PS4-exclusive game, and so, unsurprisingly, Sony has announced a new limited-edition PS4 Pro bundle for the game. The new system is definitely a head-turner, featuring a distinctive white-and-black hand print design and a cool yellow translucent DualShock 4 controller. Check out a quick trailer for the bundle, below.

Now, before you get too excited – no, the controller doesn’t actually have a tiny freaky baby in it. That’s just a little effect they added for the trailer. It’s still a neat controller, but it’s not next-level crazy. Here’s the official Sony description for the Limited-Edition Death Stranding PS4 Pro Bundle:

The Limited Edition Death Stranding PS4 Pro Bundle includes a custom 1TB PS4 Pro system, as well as a custom DualShock 4 wireless controller, and the Death Stranding game on Blu-ray Disc. Inspired by the game, this new Limited Edition PS4 Pro features a white matte finish, with two BT handprints that form the shapes of the world’s continents. Sure to bring an otherworldly feel to your home entertainment setup, the bundle also includes an orange translucent DualShock 4 wireless controller that is the same color as the game’s BB Pod. Throughout the game, you can gently rock the controller to emulate holding the BB pod in your own hands.

The Limited-Edition Death Stranding PS4 Pro Bundle will set you back $400, which is the same price as a standard PS4 Pro, so those who grab one will actually be getting a decent deal, considering they’re also getting a new game.

Death Stranding launches exclusively on PS4 on November 8, with the PS4 Pro bundle dropping on the same day. Pre-orders haven’t opened up yet, but presumably they will soon, so do keep an eye out! Anyone out there planning on picking up the bundle?