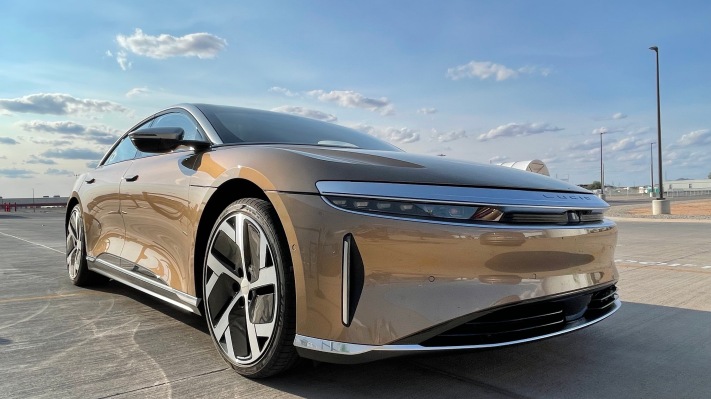 Lucid Group (NASDAQ:LCID), a former darling of the market that has recently fallen out of favor amid deteriorating intrinsic and macroeconomic factors, continues to provide one of the most exhilarating long-term capital gain prospects, albeit dented by near-term uncertainties.

As most of our readers would know, Lucid Group disclosed quite demure EV delivery numbers while announcing its earnings for the fourth quarter of 2021. To wit, the company had revealed at the time that its cumulative production stood at around 400 units of the Lucid Air Dream Edition electric vehicle. Crucially, the company had managed to deliver just over 300 units by the end of 2021 against a stated target of 520 units. Finally, Lucid Group reduced its delivery target for the entire 2022 from 20,000 units to between 12,000 and 14,000 units, citing supply chain constraints and production line kinks.

While it is perfectly normal for a nascent EV player to experience production-related teething problems, the prevailing brutal macroeconomic sentiment for high-beta growth stocks means that investors are not willing to cut any slack. It is hardly surprising, therefore, that Lucid Group shares plummeted to fresh year-to-date lows of around $21 on the 14th of March.

Nonetheless, we believe that the near-term bearish trend in Lucid Group shares is now nearing exhaustion, setting the stage for a potential counter-rally. Let’s elaborate.

Lucid Group currently has a 10-day Put-Call ratio of 1.2047, indicating that over 1.2 puts are being traded for every call. When compared with the 60-day Put-Call ratio of 1.0481, it can be reasonably interpreted that the near-term sentiment around the stock has an increasingly bearish tilt. Nonetheless, a cursory look at the upcoming expirations shows that call trades still dominate:

However, readers should note that Put-Call ratios are inherently deficient in that they do not discriminate between a trade that was opened by buying an option vs. one that was opened by selling it. Obviously, from the perspective of gauging the underlying sentiment in a stock, this is a critical failing. Therefore, I like to interpret Put-Call ratios in light of the prevailing implied volatility (IV) spread between 25-delta puts and calls. As a refresher, a 25-delta option is one that has a roughly equal chance of expiring in the money. Also, as an option’s demand increases, its implied volatility also increases.

As is evident from the snippet above, Lucid Group currently has an IV spread for 25-delta puts and calls that is well in the bearish territory, signaling the market’s skew toward puts and away from calls. In fact, this bearish regime has prevailed since the 03rd of December 2021. 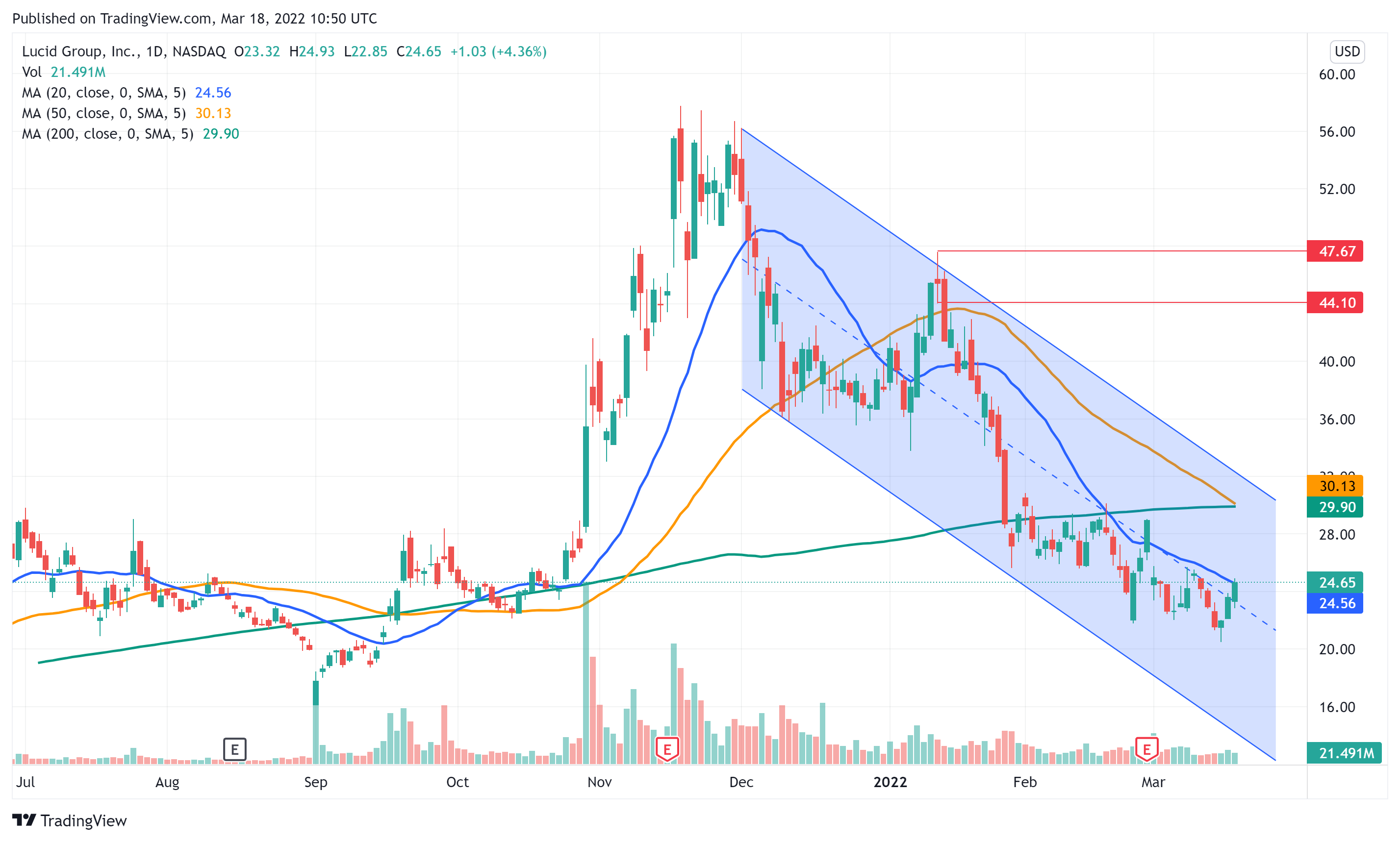 Note that Lucid Group shares are currently in a persistent downtrend channel. Also, the stock is nearing its dreaded death cross – one that occurs when the 50-day moving average falls below a stock’s 200-day moving average. It is a common misconception that a death cross is a bearish indicator. On the contrary, given the market’s recent track record, the death cross is, in fact, a powerful reversal signal (read the research here and here).

Lucid Group shares experienced a similar set up back in September 2021, only to see the stock undergo a fierce rally. So, why does the death cross act as a reversal signal? Answer: capitulation. Erroneously interpreting this setup as a bearish indicator, bulls often throw down the proverbial towel while bears load up on shorts and puts. This, in turn, provides the requisite fuel for igniting a short squeeze. A cursory look at Lucid Group’s short interest shows that the metric is indeed increasing, currently hovering at 17.85 percent of the entire float, as per the tabulation by Ortex. 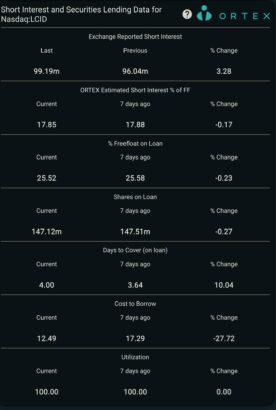 Putting it all Together for Lucid Group’s (NASDAQ: LCID) Near-term Bullish Prospects

Lucid Group shares are now down nearly 40 percent so far this year. While intrinsic factors have played a major role in this slow-moving train wreck, macroeconomic factors have continued to usher in wild gusts of headwind. High-beta, growth-focused stocks generally flounder in an environment where the interest rates are increasing. Such stocks are much more dependent on the present value of future earnings to justify their investment theses, and the benchmark interest rate feeds directly into the discount rates that are used to determine this present value. As discount rates increase, the present value of future earnings declines, thereby prompting a degradation in the overall investment thesis.

Nonetheless, something extraordinary just occurred after the recently concluded US FOMC meeting this Wednesday. The yield curve started inverting at crucial junctures, increasing the probability of a recession ahead.

Concurrently, the growth-heavy stocks started rallying as investors completely discounted the ongoing hawkish tilt of the Federal Reserve, which now plans to hike interest rates at least 6 more times this year, and switched to a tunnel vision of sorts, eyeing the upcoming recession and a resumption in the Fed’s generous monetary stimulus via interest rate cuts and QE. As an illustration, look no further than Lucid Group, which ended yesterday with gains of over 4 percent. Of course, the recent market-wide rally was bolstered by the sizable put-heavy positioning of investors and the attendant prospects of igniting a powerful yet local short squeeze.

I believe that the market is mistaken in completely discounting the devastating effects of the current monetary regime, and a recession, if it materializes, will most likely result from the powerful inflationary impulse that has been unleashed as a result of the Russia-Ukraine war and an oil market that is expected to remain in deficit for the foreseeable future. This inflationary impulse will likely sap the confidence of US consumers, plunging their proclivity to spend in a tailspin. This has grave implications for the earnings of companies. Nonetheless, should this nascent tunnel vision gain steam, it will pave the way for a sustainable increase in the beaten-down Nasdaq 100 stocks, including Lucid Group shares.

So, let’s put everything together. For a sustainable reversal in Lucid Group shares, the macroeconomic tunnel vision described above needs to hold. On the intrinsic front, the company needs to demonstrate that it can feasibly meet its downsized delivery target for 2022. A major inkling for this aspect will likely come in May 2022, when Lucid Group is expected to announce its earnings for Q1. On the technical front, Lucid Group shares have to turn the 200-day moving average into a support and then definitively breach the current downtrend channel. Concurrently, the IV spread for 25-delta puts and calls should show a marked demand for calls over puts. If this entire setup materializes, investors can be reasonably assured of a sustainable bullish impulse.

In the near term, I believe a bounce is in order. Moreover, the death cross can act as a powerful reversal signal for Lucid Group, but only if the majority of elements highlighted above align. Until then, if you’ve hedged your positions via long-term out-of-the-money put options, congratulations. Now might be the time to monetize those hedges and deploy newer ones as close as possible to your position’s average cost. If you’ve not deployed any hedges, try to lower your average cost by buying the current dips while also deploying cheaper out-of-the-money long-term put options.

This is not an investment advice. This post is meant to provide you with a snippet of the content that we are preparing for our upcoming WCCF PRO section that will be paired with a dedicated Discord channel for subscribers. Feel free to provide feedback in the comments section below.