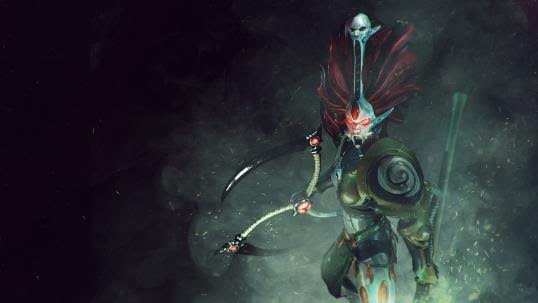 Dawn of War III brings the most famous Eldar to the battle. Learn everything you need to know Jain Zar AKA the Storm of Silence; Jain Zar is the Phoenix Lord of the Howling Banshees.

She's a deadly and powerful melee fighter that uses psychosonic screams to take down her foes. Here's a bit a backstory of Jain Zar, courtesy of the official Dawn of War blog.

Jain Zar is one of the most fabled Eldar in recent times. Born amidst the Fall of the Eldar, much of her early years were spent roaming the galaxy in search of survivors. She found one such evacuee and saved him from certain death. This survivor became known as Asurmen, the first of the Phoenix Lords. Among others, Asurmen mentored Jain Zar. In time, she herself became a Phoenix Lord and roamed the stars - building Howling Banshee shrines among the Craftworlds of her people.
When a Phoenix Lord dies, their mightiest Exarch step into their armor. Doing so infuses their spirit within the armor’s spirit stone. This process reincarnates Jain Zar, consuming the soul of the Exarch who brought her back. In essence, Jain Zar has lived many times over, and the whisperings that she is emerging once more have proven to be true.
Jain Zar is a fierce melee Elite boasting both high mobility and damage. Using Dash, she can quickly get out of harm’s way or jump into a fight. Dashing into enemies will launch her into the air, doing damage in an area at the start of her jump and again when she lands. Silent Death is great for picking off enemies from afar, but she can also use it to launch into the air when used in combination with Dash.

Listed below are Zar's passive and active abilities. By the looks of it, it seems like she can do some real damage.

Dawn of War III is coming to PC next year.