Dawn of War III Hands-on Impressions – It Blew Me Away

Honestly, I was disappointed when Dawn of War II came out and genuinely don't care for the game. It moved away from its real time strategy roots, to a real time tactics with RPG elements. Quite simply, it wasn't what I expected. Surprises are always interesting. I could see the surprise in SEGA's PR person when I openly said that when asked my thoughts on the franchise. There's also the surprise I had when I got to play this game at EGX. A fantastic surprise, because Dawn of War III brings the series to whole new heights. It really backed up the excitement I felt when Dawn of War III was announced.

Fortunately, I got the chance to play the mission on show at EGX the whole way through, which really gave me a sense of the experience that the game has to offer. Honestly though, I was sold within fifteen minutes. Dawn of War III brings back the base building of the first game, combines it with the tactical approach that the second game took and merges them to make one of Relics best outings to date.

The hands-on session that was playable at EGX puts you into the sturdy boots of the Space Marines. The mission actually takes place towards the end of their campaign. What this means is that everything was unlocked and available to use. Led by the hero Gabriel Angelos, who is more than happy to wade in on the battle himself, the time for death and destruction on the battlefield is nigh. Using his god-splitter hammer, he is able to leap into the fray, knocking back all those around him and then swinging it in a whirlwind to cause huge damage. The other two special units on show for the Space Marines are a group of Assault Terminators and the first super unit that was announced, Imperial Knight Solaria.

These special units are incredibly powerful, with clear strengths and weaknesses. Solaria was my favorite to use. As discussed in my piece of the recent Wraithknight super unit announcement, Solaria is absolutely huge. She towers above the battlefield, making even tanks seem small and insignificant in comparison. Armed with giant miniguns and missiles, with the ability to go melee if required, she is absolutely devastating. However, due to her size and being as well armored as a continent, she was slow. Even slower when having been used for a while and overheating, though overheating does include her damage by a large amount. 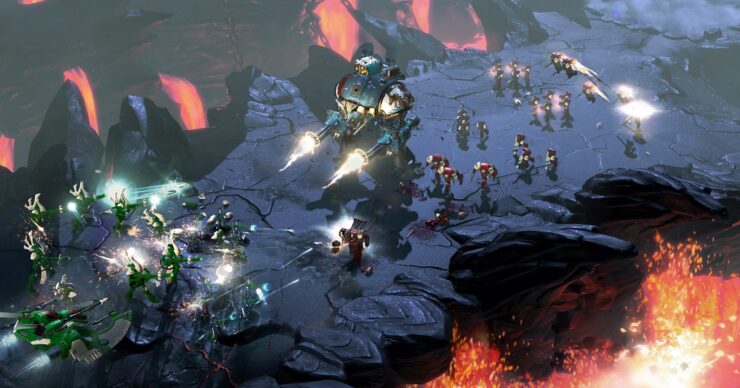 Of course as strong as a hero or super unit is, they can't win a war by themselves. You'll have a varied selection of tanks, infantry and other units to build and back up your heroes. Even the abilities you gain can be used to assist, from orbital strikes to drop-pods that can be used to drop some well needed space marines into the fray. Even building your base offers that sense of support, from placing a listening post to defend your resource point, to expanding your base and researching upgrades. Everything looks and acts like the sort of Dawn of War game I'd hoped it would be.

It really feels like Relic have taken the best from both games. Though there are a few aspects I find a little strange, such as the cover points found on the map that, when capture, create a shield. I also questioned the lack of a defensive building, bar the listening post. It's possible that they took me more by surprise than anything, but I understand the choices. The cover points act as a capturable bunker and the lack of defensive structures (bar the listening post) could promote a more tactical and slightly more aggressive approach to playing. They are minor niggles in what is an otherwise excellent first impression that only gets better when I think of the aesthetics.

Dawn of War III is a stunning game. Sometimes I find it hard to even explain to myself why I can find a barren snow-covered wasteland, somehow riddled with canyons flowing with lava that spews out smoke, beautiful. From the perspective of an idyllic place, of course it's not. But the level design, how everything works together and adds atmosphere, it's nothing short of brilliant. The level shown at EGX featured this, and although the verticality of the map really didn't come into effect much, it was great to see and also to see how it impacted the game. Hazards, such as smoke, would block your units view and make enemies impossible to attack until either you, or they, went through and made themselves visible.

As much as I don't like to use the term, Dawn of War III is a true AAA title. The detail of the visuals, the audio and the design of the maps and the units, their abilities and more. It really gives you the feeling of a true, huge release, strategy game. Not only that, in what was close to an hour on the game, I found nothing to truly complain about. There are aspects I found strange, but even those I understood. Strategy fans, here's a game to watch and it's due sometime next year.