I never quite understood MOBAs. Quite frankly, I think the lack of a single-player campaign prevents me from understanding them. Sure, there's a brief tutorial, but without the gradually increasing challenge of a single-player campaign, I always end up being bewildered and overwhelmed by the time it comes to playing against real people. Which, since I'm a fan of fighting games regardless of how much single-player content they have, is both ironic and a little bit hypocritical.

But that's where Darksburg comes in. Darksburg is a game that does borrow heavily from MOBAs like League of Legends or DOTA II, but takes just as much from the likes of Left 4 Dead and Diablo, as they strive to create a MOBA-like experience, but with a strong PVE component. You'll be trawling through dungeons and darkened cities while an undead horde nibble at your feet, all while collecting items and solving missions.

I played through some sections of the game with one of the developers from Shiro Games (the makers of Northgard), and to be clear, it is very possible that I am just bad at the game. Given my lack of MOBA experience, it's perhaps even likely. But Darksburg felt incredibly difficult, and the only thing that made me feel better about my excruciating lack of ability was that the Shiro Games team member playing the game with me was also dying along the way. 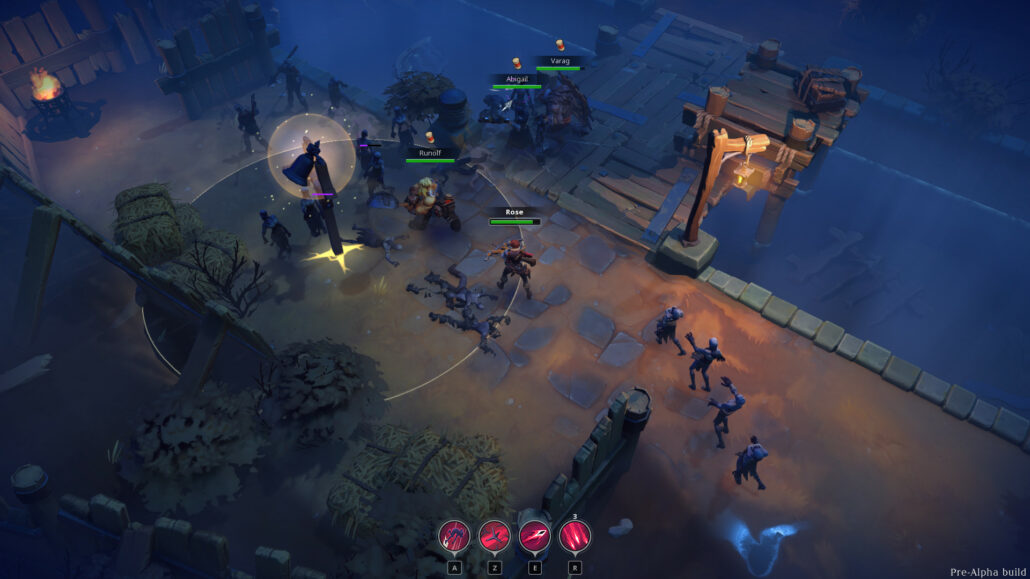 We rolled out through the city streets, all while fighting back against the undead. It's here where the Left 4 Dead influences come in to play. Essentially, what you have is a Left 4 Dead-like game where your control is influenced more by contemporary MOBAs, creating a unique co-op survival experience. You can play the game with up to four players on your team, and I can only assume that an additional couple of players would've made playing way easier.

What's also interesting is that Darksburg doesn't get rid of the PVP mode entirely, either. You can take control of Revenants, which allow you to play as the undead horde, and attack the players to try and take them down. Though, since I essentially experienced this in a 1v1 scenario, I can't really speak for how it will play out once one of you have a full team to join in with. As of right now, the Revenants feel underpowered, but I suppose numbers are on their side.

Everything in Darksburg sounds deliciously interesting to me, but in practice, I just didn't enjoy it that much. To be clear, if a full team of four people I knew were playing the game, it'd be a guaranteed blast and we'd all love it. If it's just yourself with a single friend, Darksburg is a very different game, and far more lonely.

Darksburg could turn out to be a fantastic game to play with a group of friends, but as of right now, I think the future looks very uncertain. The game is due net year on PC via Steam.