After the confirmation of Dark Souls on the PC hit the internet yesterday it was told that the PC version would give players more bosses to tackle while there was no official word on how many bosses would be added someone was able to scan two of the bosses from PC Action Magazine which are apparently two of the games bosses for the PC version, the only question is will the number stop at two or will From Software add even more to the game? Let's wait and see for the time being. 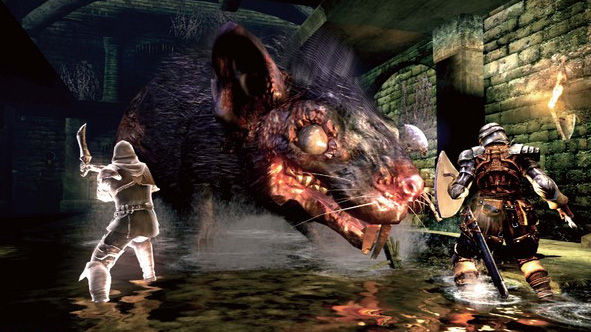 I received a link to the imgur album in my private email and as far as I can see the images do seem pretty authentic.

I may not be the most skilled German translator but Here is my rough guess on each of the images in German, please feel free to leave a comment correcting me if you feel I am wrong because I got the help of this translation from some one who has very rusty German.

Once again these are ROUGH translations and may or may not be accurate so if you do know the proper translations of the German text feel free to add it in.

"They often get together with dragons" = You will often meet dragons; Once again thanks to Stigtrix for the translation.

One thing is for sure; these aren't any bosses in the console version of the game so I am pretty sure about the authenticity of the images considering how PC Action Magazine is German based. Once again the only real details I am interested in are system requirements, release date and more boss details. I hope that From Software makes the wise choice of choosing Steam as their digital distribution media, I also hope that From Software doesn't enforce some kind of Draconian DRM which Ubisoft did with previous titles.