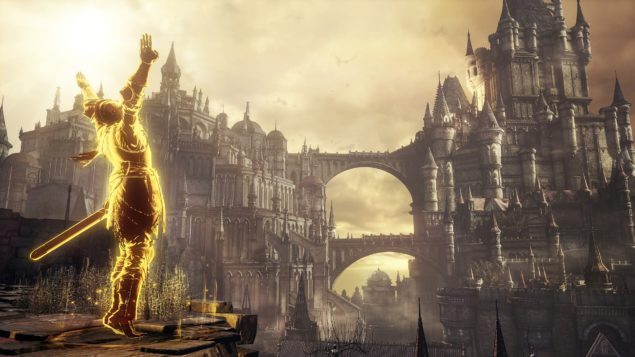 Awakening on the outskirts of a grandiose and crumbling castle wall, I immediately try getting a feel for the beaten path before me. Impossibly skeletal dogs jump from behind corners, the seemingly dead rise to greet (and beat) me and there’s a feeling of hopelessness and abnormality that I haven’t felt in a little while.

Before long I find myself dwarfed by a pair of foreboding doors. With nowhere to turn I push forward, the doors creek open and a man in a suit of armor, stood with his chest pierced – almost frozen in time – awaits me in a Colosseum-like arena. I walk forward and draw the spiral blade from his chest, giving life to what could’ve been a statue. He stands, draws his weapon, and charges for me. It’s a bloody, lengthy battle, and just when I feel I’ve got him where I want him, a black shroud swallows him whole, and disgusting, an abominable arm screeches from his torso, directly towards me.

If the above sounds familiar to you at all, you’ve probably played a Dark Souls game in the past. The atmosphere hasn’t changed much in Dark Souls III, and your enemies still tend to be either cadaverous or encased in armor, but there’s a beautiful familiarity to it – it’s away from Bloodborne’s disgusting streets of Yarnham, and back to the more familiar setting of Lothric and its towering walls. Here it’s not an established civilization on the brink of despair, this is a land so steeped in despair and misery that it would be a way of life if it weren’t a constant reality that must be endured. On top of that, the phrase “way of life” doesn’t really work in Lothric, as life left here long ago, leaving behind only the bleak reality of eternal death. Mind you, “way of death” doesn’t exactly roll off the tongue.

Once our mutated friend has been felled the game claims you victorious, with the giant victory text that so many Souls obsessives live for. You walk through the arena and come face to face with Firelink Shrine, somewhere that’ll be familiar Dark Souls fans, though things have changed. It used to be located in the open air with gray skies looming above, but now Firelink Shrine is cavernous, no visible sky, with utterly ruined surroundings. Inside Andre the blacksmith still works away, and a small host of other no-longer-living beings await to provide you with services – whether or not you’ll be happy with what they’re offering is another thing entirely. 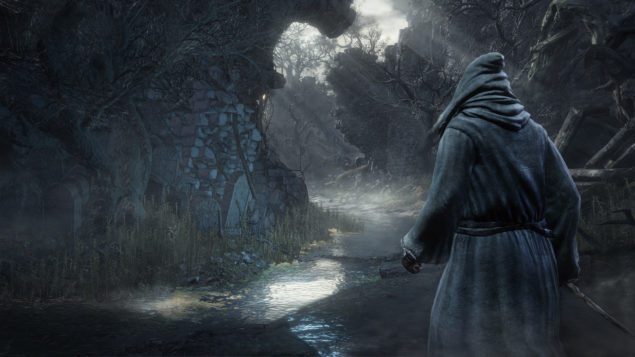 Moving from tower to tower in Lothric was a fascinating experience and helped me feel that same adoration for Dark Souls that I felt when I first played it. I was storming through hallways and towers tearing enemies apart, when suddenly a dragon drops down and incinerates the warriors that were next on my blade’s to-do list, in a moment that felt very much like a moment in Demon’s Souls. Passing by the flames and straight past the scaley beast I come face to face with a new warrior – better equipped and faster than the rest, he quickly teaches me that the enemies I was facing until now were child’s play. Of course, this is the Dark Souls experience through and through.

The usual Dark Souls fare happens from that point on, find a new bonfire, discover shortcuts to older bonfires, and so on. The changes are few, but feel meaningful. Indeed, for the most part this is the same Souls we’ve seen at least twice already, but Lothric feels more intense and depressing, with a greater air of mystique and uncertainty than I’d felt with previous titles. All of this, despite the familiarity, is a very good sign for Dark Souls III. Despite being used to the gameplay and enemy types Dark Souls has to offer, I’m still constantly in a state of unease, where a single mistake can cost me the entire game. The dithering I perform whenever having to choose the next path to take is proof enough that Dark Souls is a game that teaches you to be on edge at all times.

That's when I begin getting to the end of my tether. I’m struggling to find the path forward, a kindly old woman in an oppressive chapel has told me to raise a banner and I have no idea where to go. I stumble down some large stairs, towards a large chamber. Uh-oh. Of course, a large chamber like this often means an equally large enemy will be coming my way. The dog-like guardian of the path forward was mean, a gargantuan, frosty beast swinging a giant mace. He commands attention; he commands all of your senses be locked on him, lest you die again.

I’d say it took me four to six attempts to fell this foul beast, each time I learned something new about how he moved, and how I should attack. Finally he falls, giant doors swing open and reveal a cliff overlooking yet more misery – a village of the dead. I raise the banner, summoning winged beasts to whisk me away. As they drop me atop another castle roof I’m hooked. Absolutely hooked. I want more from Dark Souls III, I want to know where I will be taken next and what atrocities will be waiting for me. 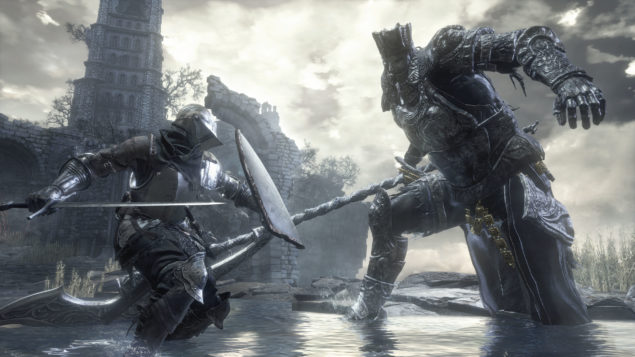 Prepare to die? For a game like this I’m more than prepared – throw me to death’s embrace, for I have stared some of the most dangerous beasts dead in the eye. I’ve survived Drangleic, and I’ve survived the Tower of Flame… Am I prepared for what Dark Souls III has to offer? There’s only one way to find out.

Dark Souls III will be released for PC, PlayStation 4 and Xbox One on April 12.