Cyberpunk 2077 has had quite a tumultuous lifecycle, to say the least. But, CDProjekt Red is churning away at improving the game and Patch 1.2 is a whopper of a release and brought many improvements as well as rolling the ray tracing functions out to everyone who supports it. Yeah, that means RDNA2 based graphics cards are able to take advantage of Cyberpunk 2077's next-generation graphics options with Ray Traced Reflections, Ray Traced Shadows, and Ray Traced Lighting.

But the reason we're all here is for the performance, we wanted to see how things shook out with the latest patch in regards to ray tracing performance and factor in DLSS as well. We dabble a bit with the use of FidelityFX CAS to see how much performance it can pull back out for the RDNA2 cards for those who wish to play the game with these features enabled, but as you'll see in the results DLSS is a magic bullet in this one with or without RT features enabled.

Cyberpunk 2077 isn't exactly a brand new title so most are already familiar with the next-generation features of the game but we're going to run through a quick look at what it brings to the table and a look at the differences in scenes with and with these enabled.

Reflections are one of the most prominent and noticeable ray tracing options, it corrects the reflections on a variety of surfaces that would otherwise be obscured by cube maps or rely on screen space data and otherwise be unable to reflect off-screen geometry, but with ray tracing surfaces can become more accurate in their reflectivity. That often comes with the accusation of making every surface 'like chrome' and that simply isn't the case. The scenes used to represent this avoid that chrome-like effect and even allow you to see through the glass that would otherwise be obscured by old techniques leaving the scene much more clean and natural looking. 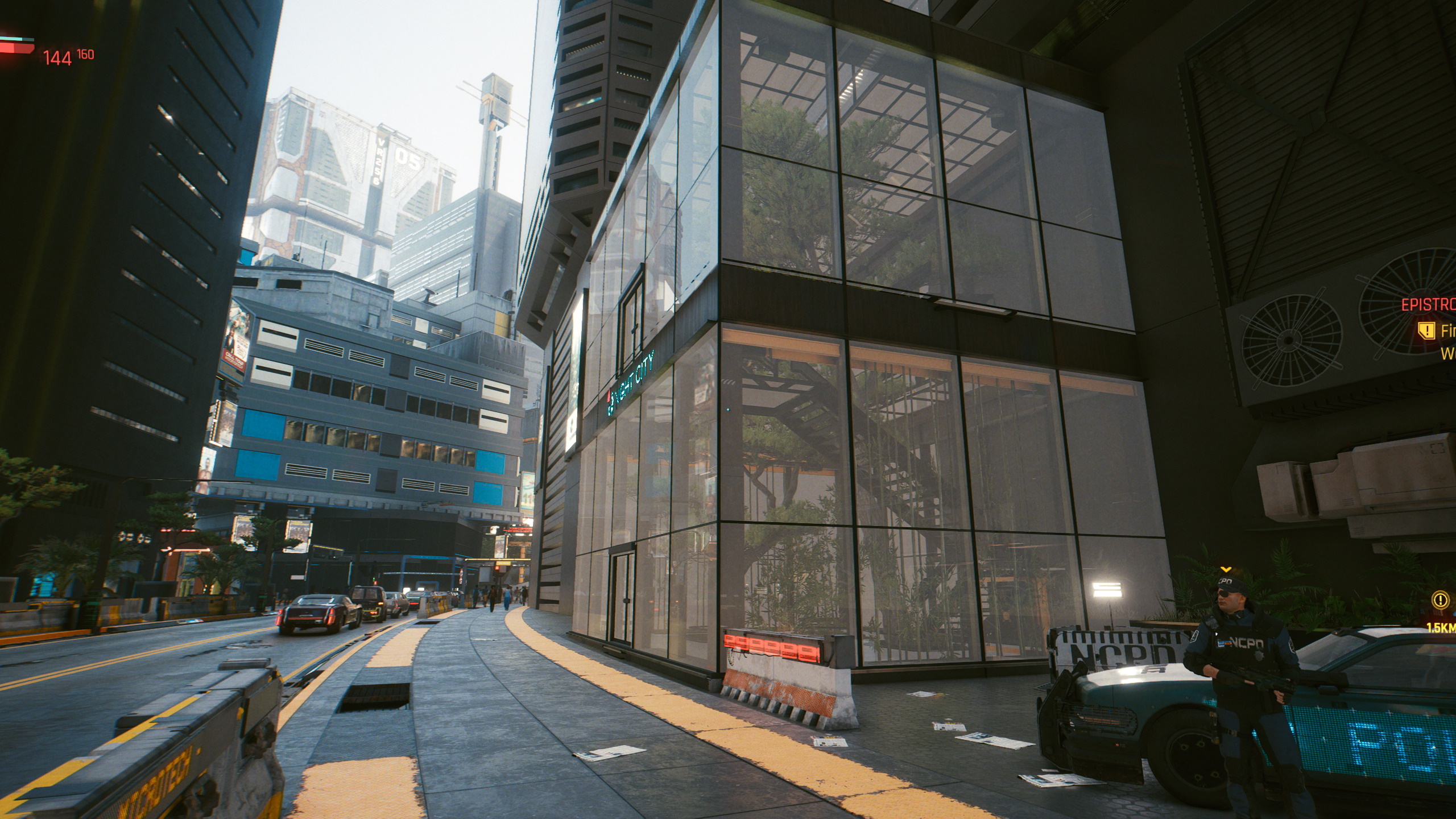 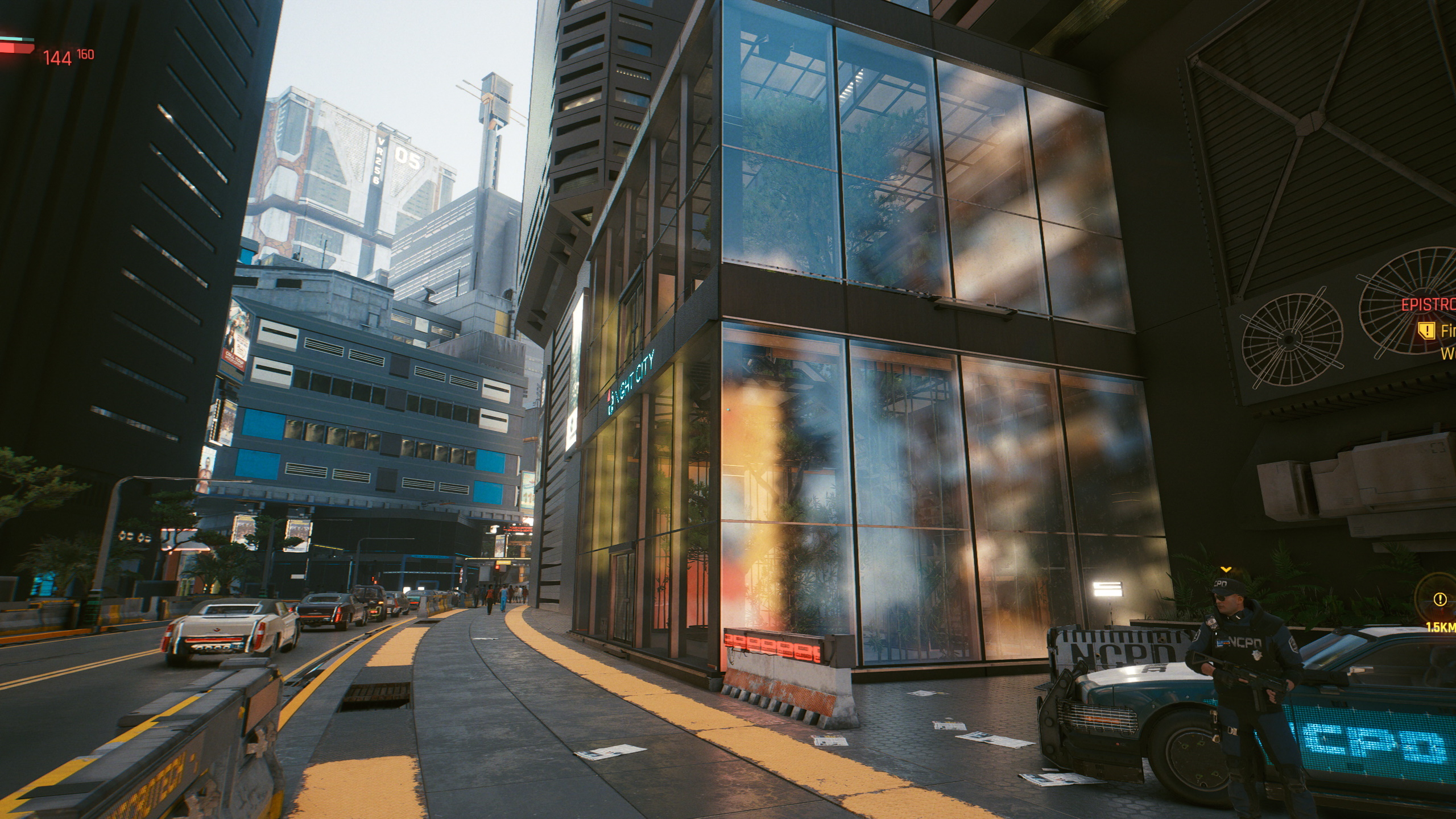 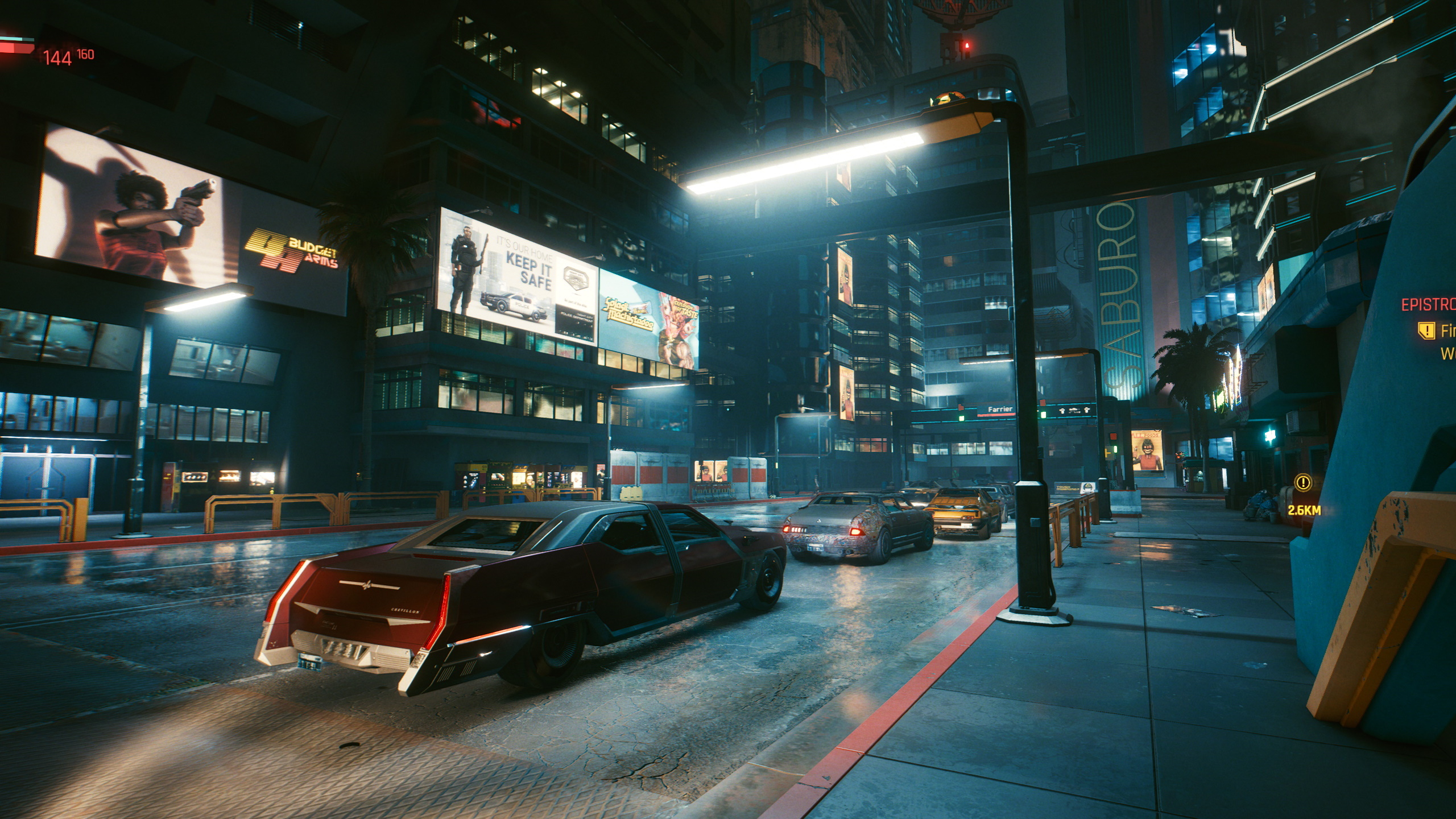 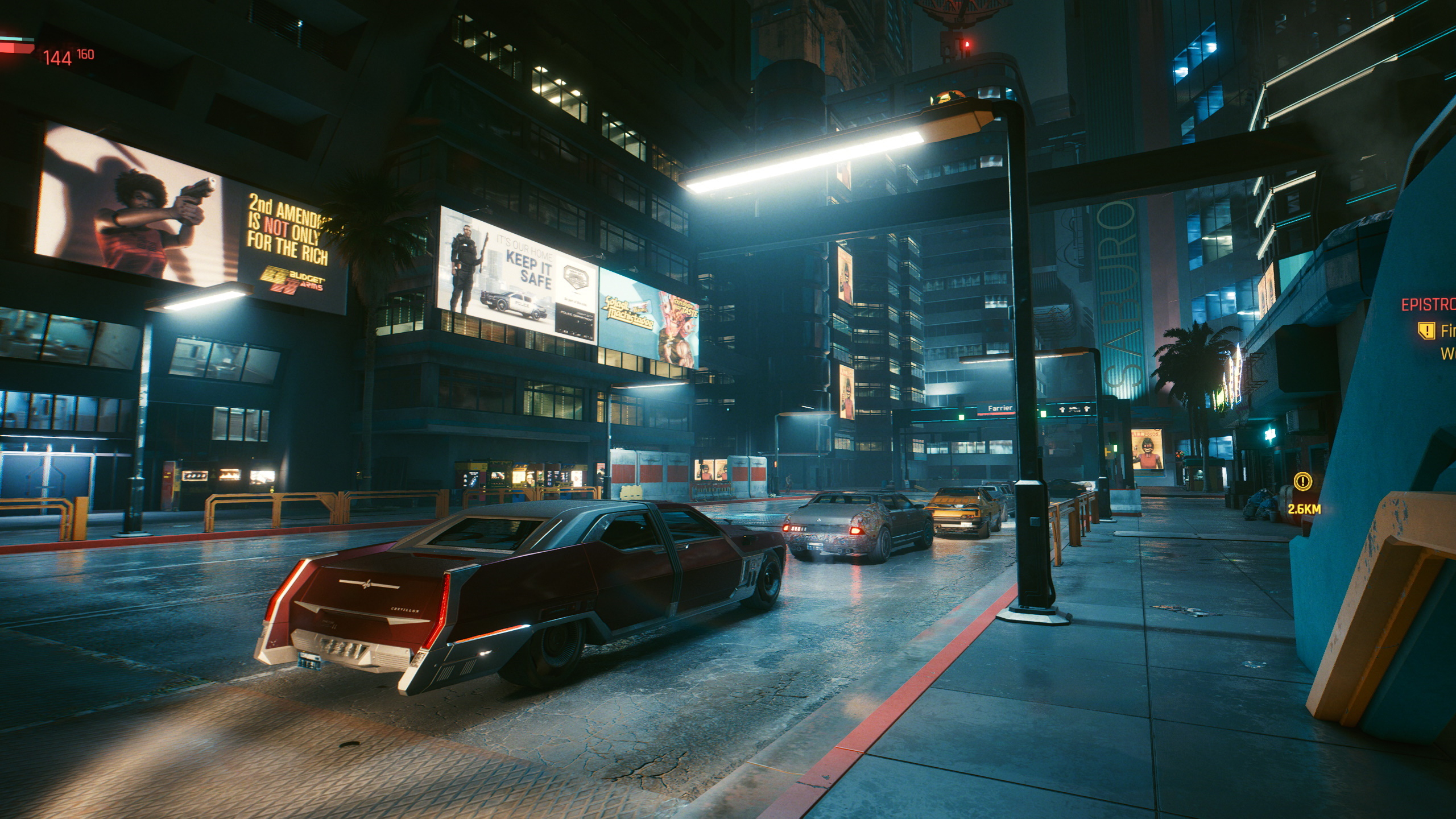 Cyberpunk 2077 already has a brilliant game engine when it comes to ambient occlusion that handles lighting exceptionally well. This makes it even harder for something like ray-traced lighting to showcase an impact the way it does with reflections but still manages to clean up a lot of the game world.

The impact is most prominent on the underside of buildings and in alleyways, also along with debris on the sides of the roads showing more accurate lighting from the world around it. The other places, not showcased here, are going to be near and at neon lighting where the glow really pops and floods the areas around it as neon-style lighting in the real world would. 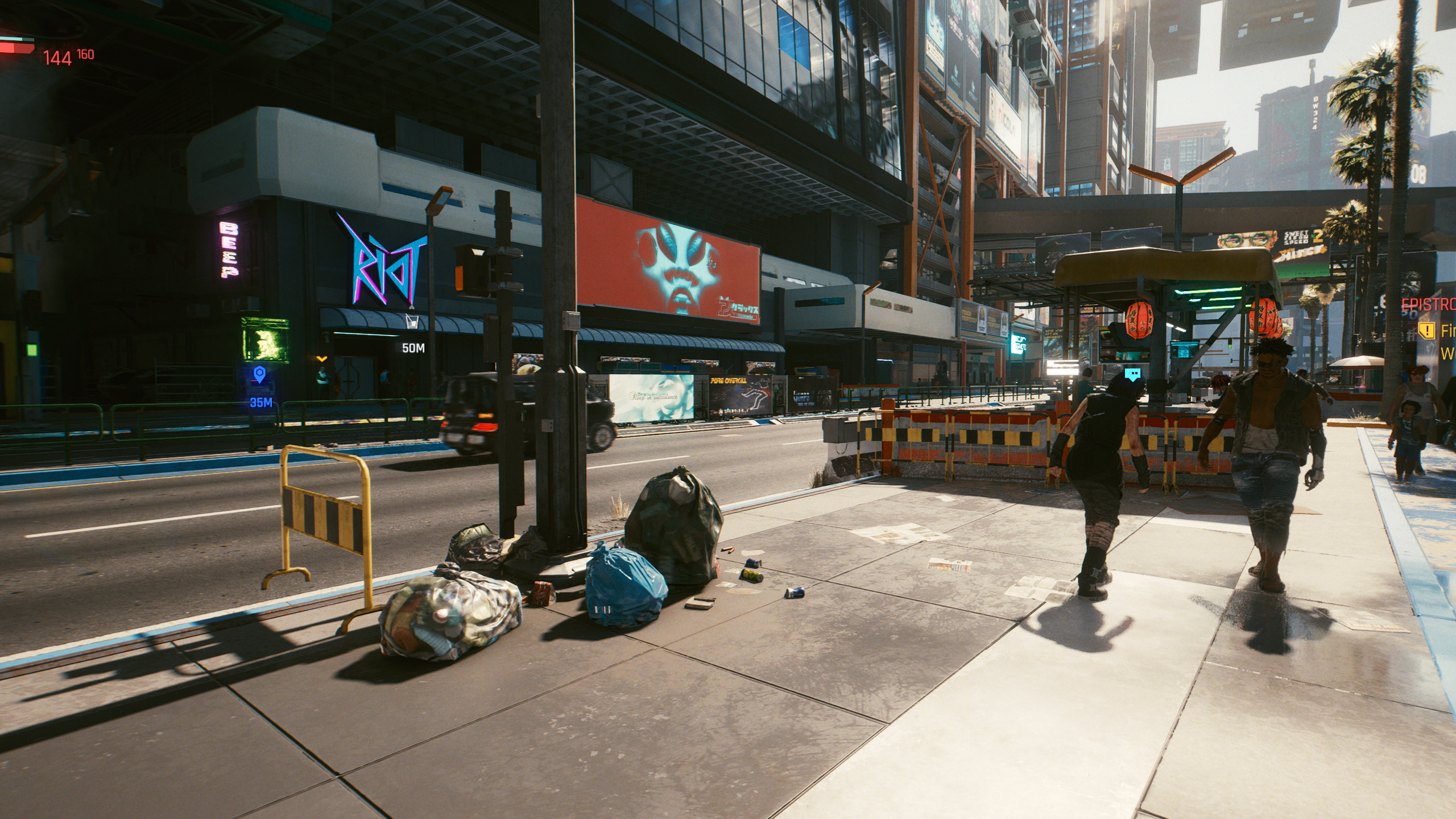 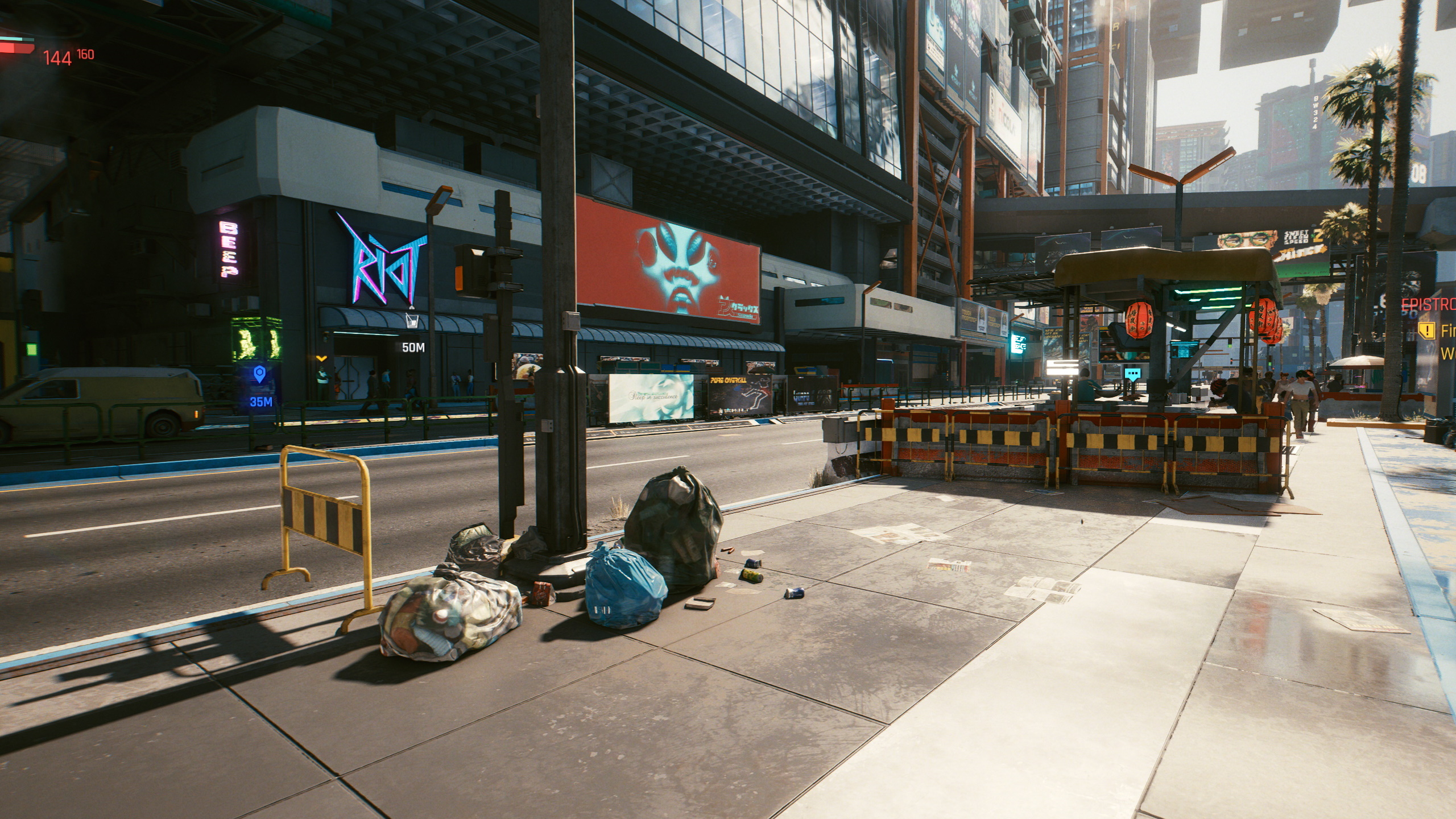 Ray-traced shadows are often the least noticeable of the ray-tracing techniques in passing but they are one of the least impactful on the system to run so that's a good thing for those wanting to take advantage of the feature. But in the right environment, they can make quite an impact on the ambiance of the scene.

The use of ray-traced shadows in Cyberpunk 2077 come from the source of the sky so don't expect wild and crazy shadows bouncing around from cars, you'll see the biggest change in building structure shadows and vegetation like trees. 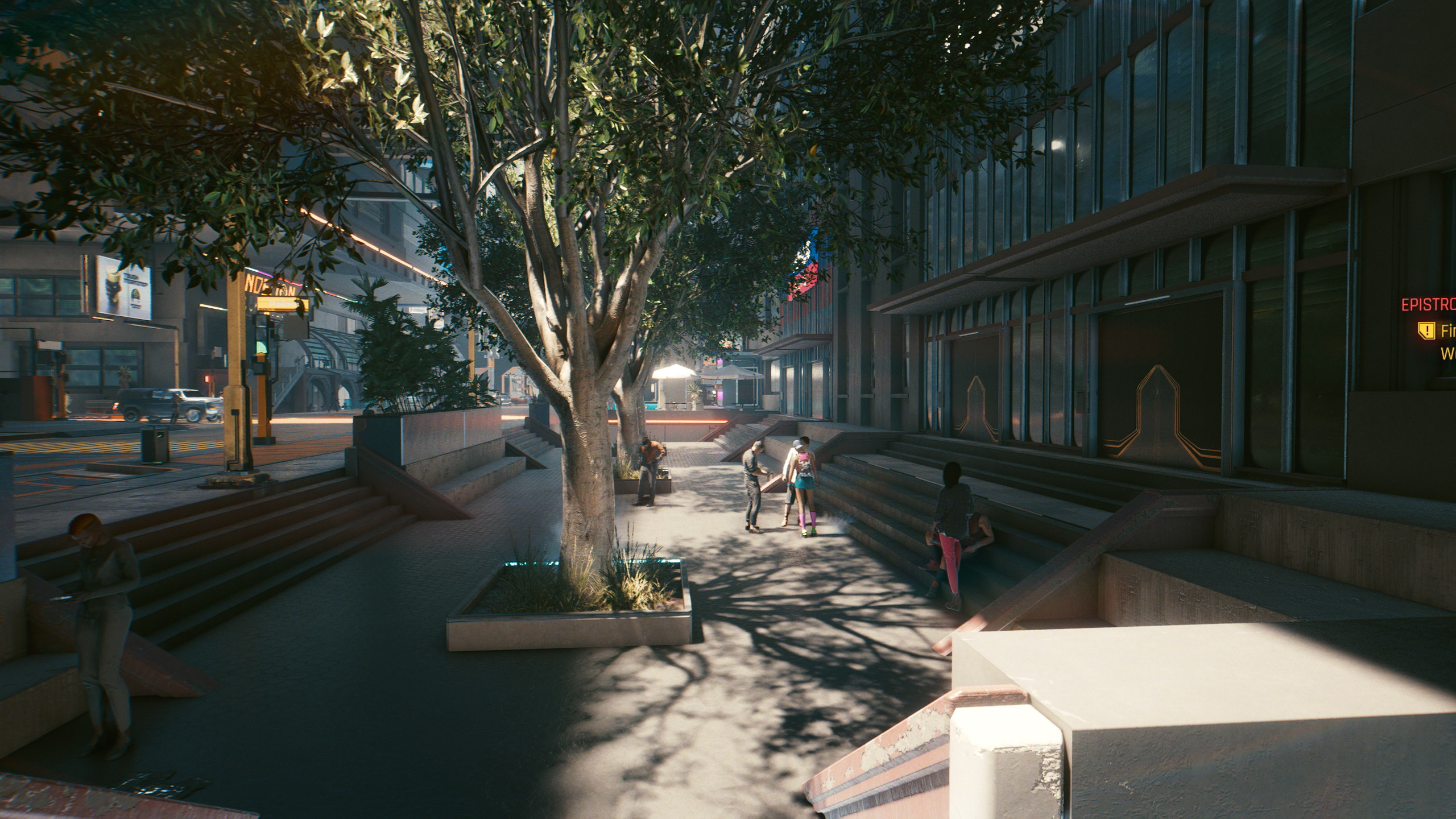 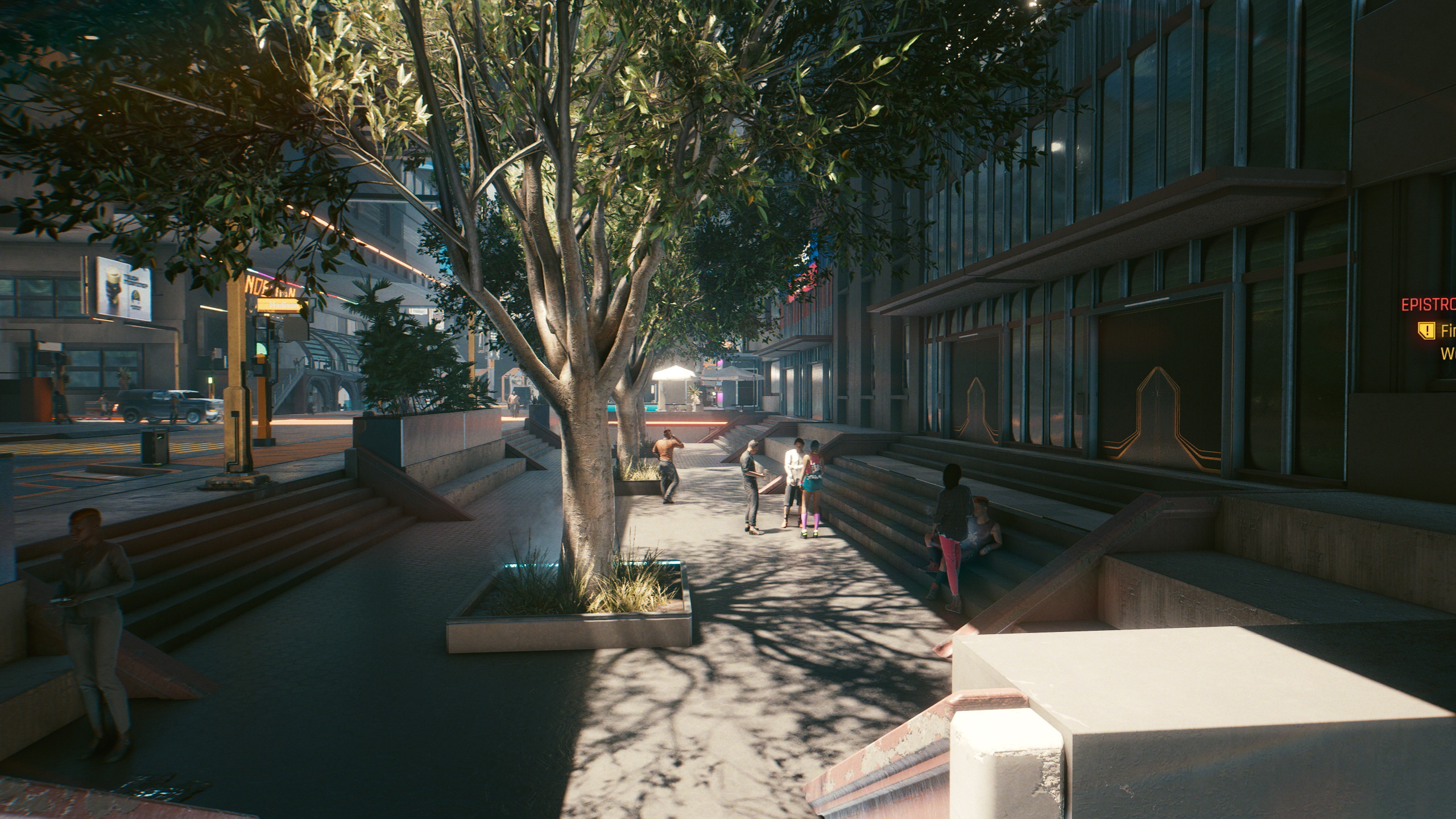 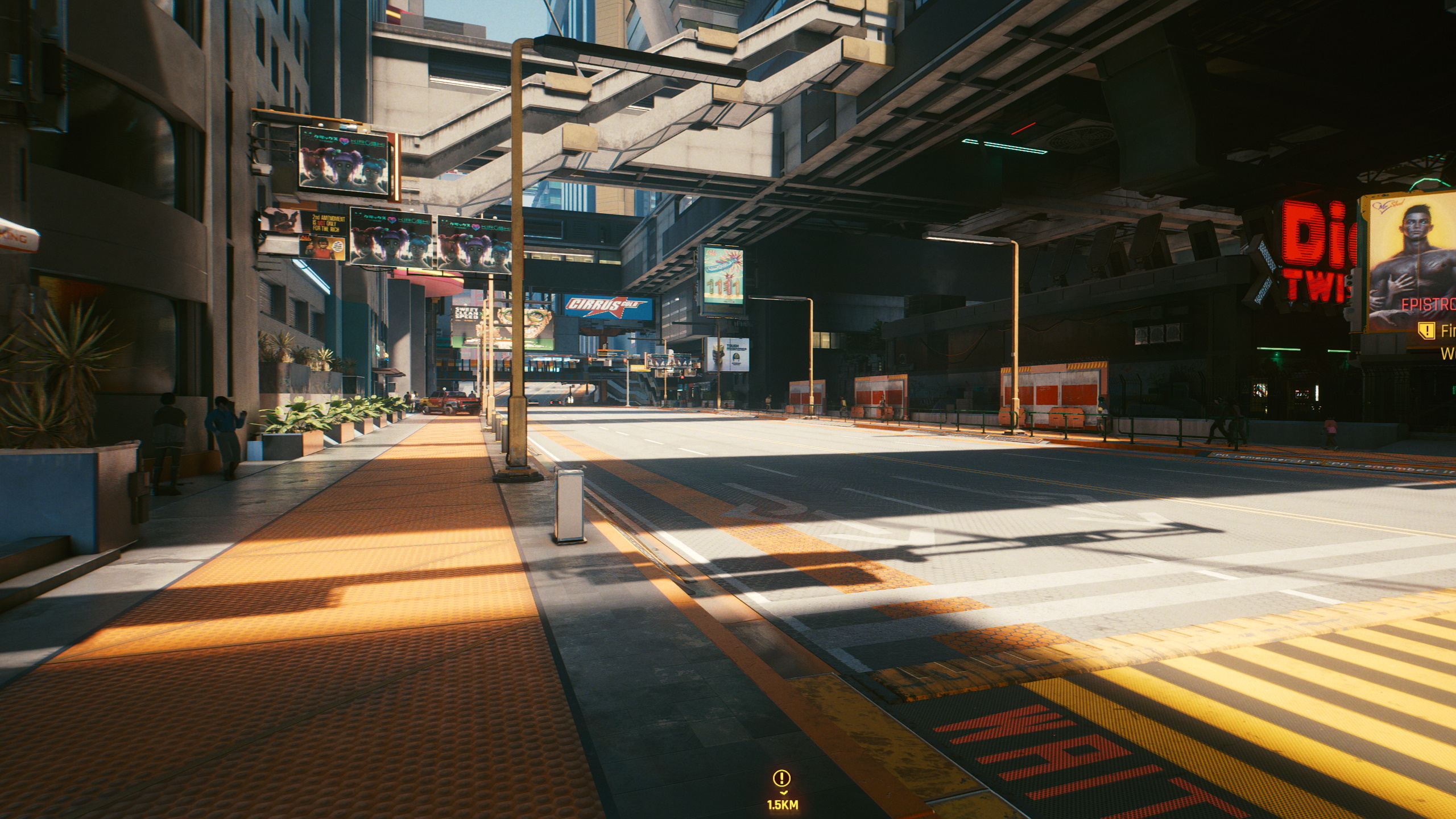 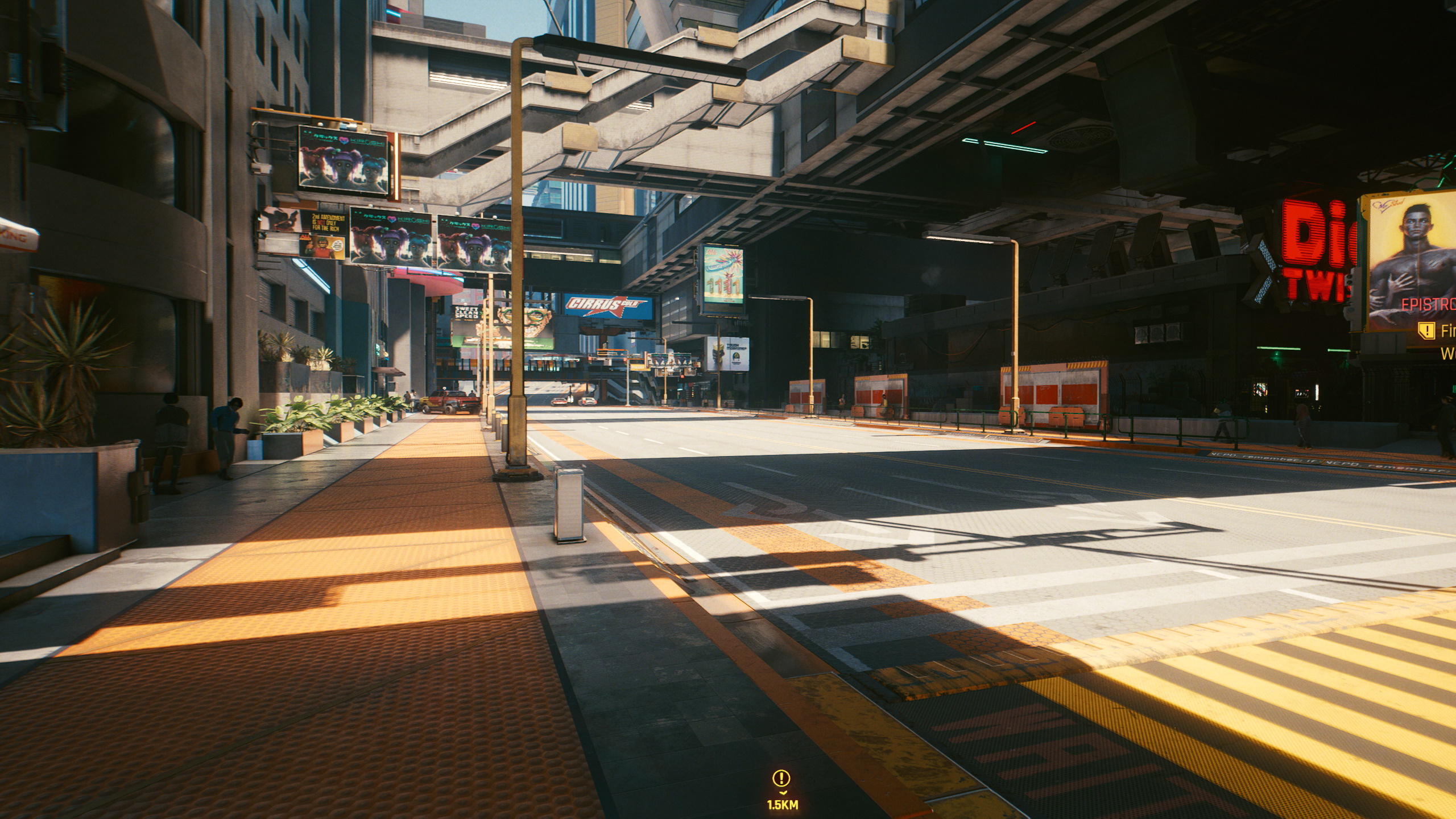 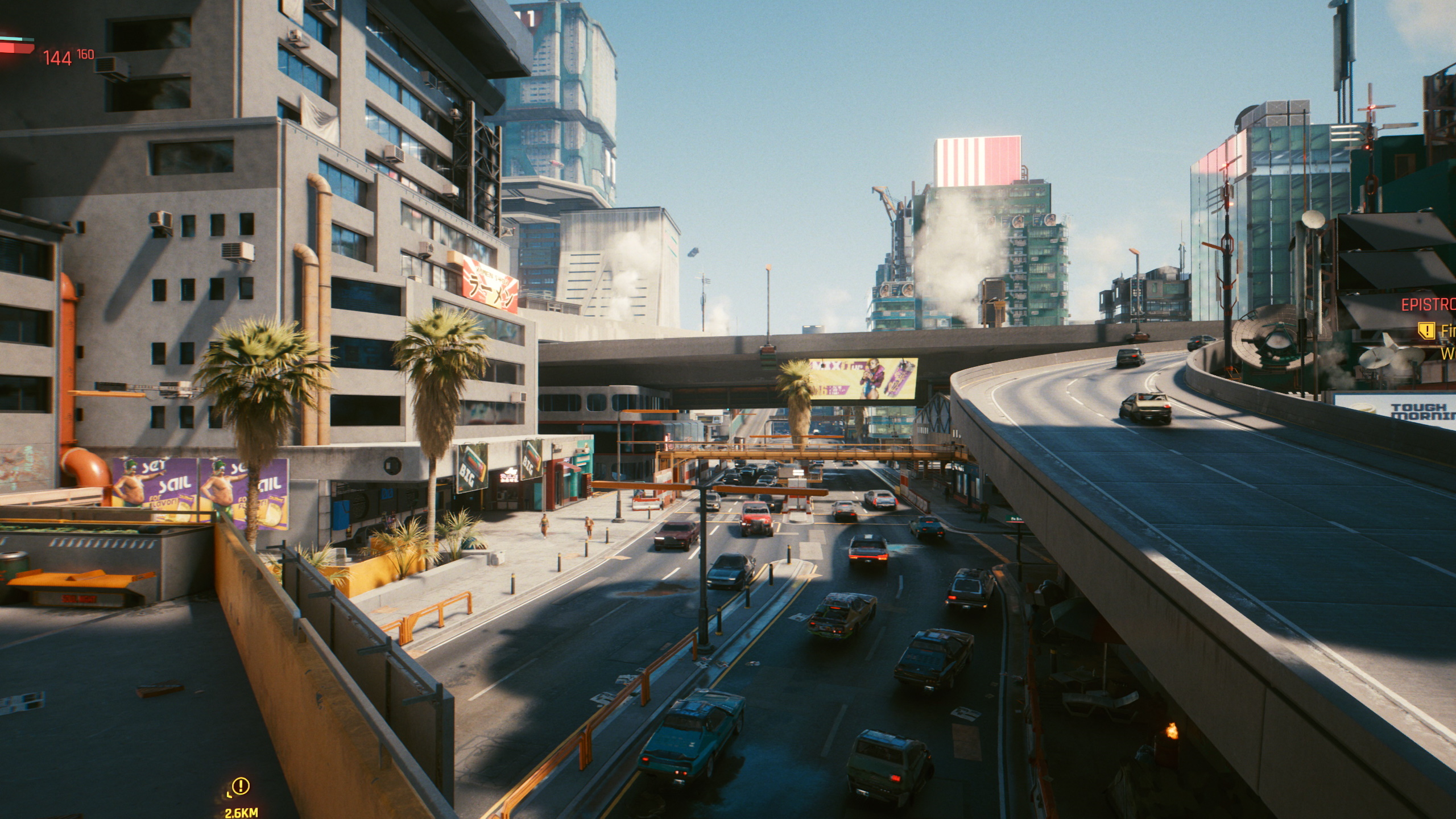 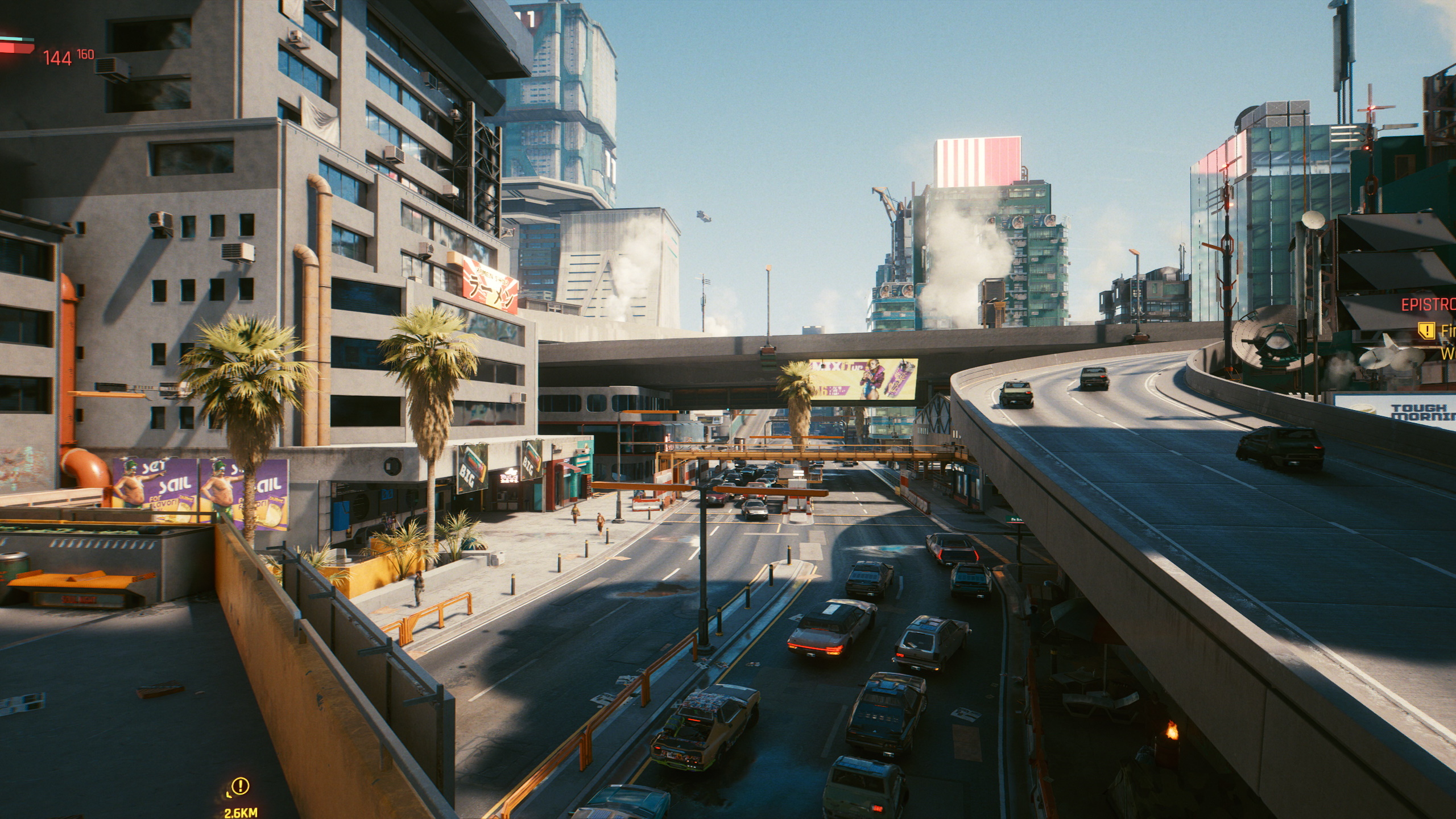 Cyberpunk 2077 does not feature a built-in benchmark and as such we have to rely on setting up a reliable and repeatable in-game path to test like for like performance. By the very nature of an open-world game, this presents a bit of a challenge because the performance of this title varies based on the environment of the game. You can go to a heavily detailed club and have one idea of performance and then walk out onto the deserts outside of Night City and have a very different performance expectation.

For our testing, we used the path below that led us on foot for a short time into a car and a drive around the same path to get an overall idea of how performance outside in the city would be. We ran this path three times and took the average results before plotting them on the charts. For settings, we used the Ultra setting as it stands but when we tested the Ray Traced Medium and Ray Traced Ultra settings we adjusted the DLSS option from AUTO to Quality, and that was primarily due to Auto being a variable and we wanted to test fixed setting performance for non-RT as well as RT performance. 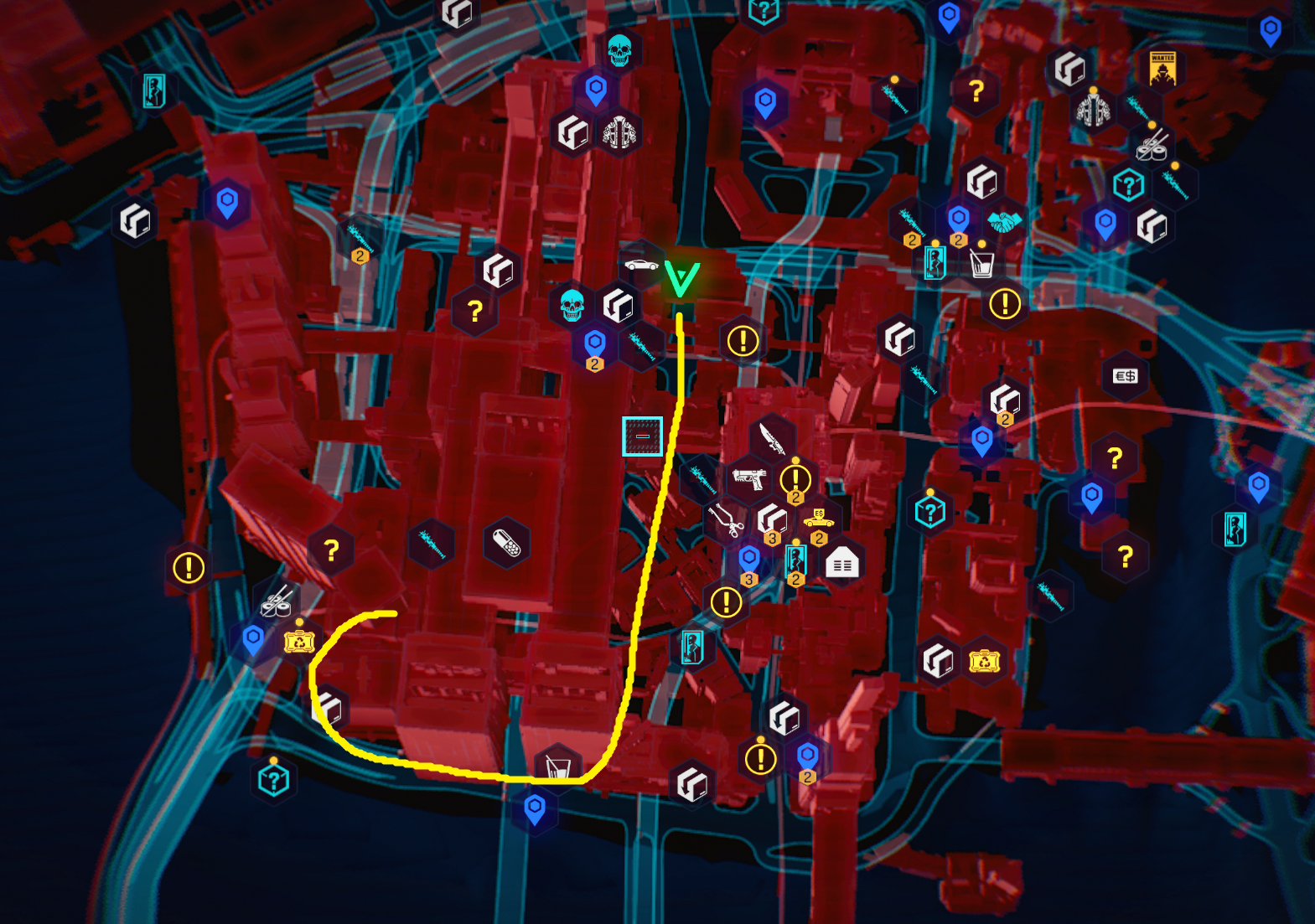 Cyberpunk 2077 doesn't just feature DLSS support there is and has always been, support for AMD's FidelityFX CAS in this title. It's quite useful for those without an RTX card to extract extra performance from this title. You'll have two options to work with being a static option like we used for the results below and a dynamic option that allows you to set minimum and maximum target resolution percentages based on a target framerate.

As far as comparing FidelityFX CAS in this title to DLSS, well that's not quite a fair comparison in image quality but if you do use this I would suggest adding in additional sharpening, and the higher the resolution you can get the better. But for the results below we used static FidelityFX CAS at 75%

Across the board from looking over older numbers I had saved from when the game launched I can see a good improvement in performance when it comes to this title. Both Radeon and GeForce have come up in average performance as well as relative smoothness from the launch. That is, of course, contributed to driver improvements as well as improvements from the developer on this one.

But when it comes to next-generation features things get interesting as we're finally now able to see how RNDA2 stacks up in Cyberpunk 2077 with ray tracing enabled. Without Ray Tracing the RDNA2 cards perform very well against their counterparts from GeForce. But, that is mitigated when those cards enable DLSS. Even at 1080p with the use of DLSS the RTX 3060 is able to come toe to toe with the much more expensive (MSRP) RX 6700 XT and the RTX 3060 Ti moves in between the RX 6800 and RX 6800 XT in performance metrics.

This story becomes even more exaggerated when you enable Ray Tracing features, and the more you enable the more benefit the Ampere powered RTX 30 Series see from their architecture and the addition of DLSS. When you turn on ray tracing to Medium or even Ultra with DLSS at Quality (not even using the more performant versions) the RTX 3060 is outpacing even the RX 6900 XT.

Whether you care about the ray tracing features or not Cyberpunk 2077 is a title that greatly benefits the GeForce cards in terms of DLSS usefulness. These results exemplify why technology like DLSS is so important and why NVIDIA is taking advantage of getting it in as many titles as they can. It also shows why those who have RX 6000 Series cards are pushing so hard for FidelityFX Super Resolution, because it's hard to look at these types of uplifts and not want a piece of the action.