Crucual, a leading memory and flash products manufacturer is aiming to launch their latest DDR4 memory modules for desktop PCs in late 2014. Computerbase managed to take pictures of their CES 2014 booth where several engineering samples of the upcoming DDR4 memory modules were showcased. 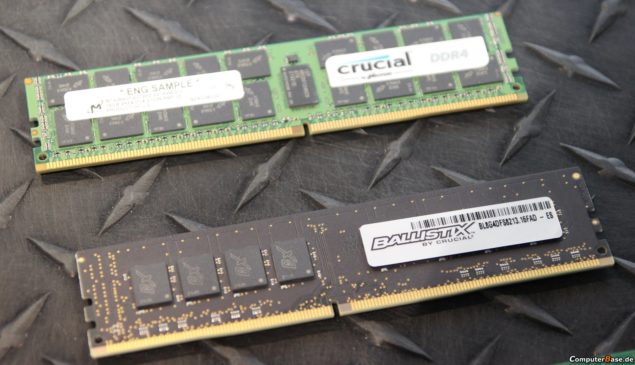 Images are courtesy of Computerbase!

Crucial and other memory makers will commence production of the DDR4 memory modules for Intel's server platform starting Spring 2014. DDR4 memory for consumers will arrive later in Q4 2014 when Intel's high-end Haswell-E platform is expected to launch. Crucial will launch their new DDR4 memory under the Ballistix brand with rated frequencies of 3000 MHz which is over the JEDEC standard of DDR4-2133-2400 (1.2V) so these will obviously be considered OC memory kits.

Crucial along with several other manufacturer's will work with Intel to approve and confirm the new Intel XMP 2.0 (Extreme Memory Profile 2) specifications which allows memory to be optimized on Intel motherboards so that it runs stable at the clock frequencies and ratings its shipped from the memory maker.

Intel's Haswell-E would be the first consumer platform to officially support the DDR4 memory. The new high-end platform is expected to launch in Q4 2014 bringing in enhanced set of features and more cores for enthusiasts to overclock. On the mainstream side, Intel will launch the Skylake platform in first half of 2015 which would also be given DDR4 memory support and we will see a wide range of memory kits available to consumers by that time with different clocks and timing configurations.

G.Skill, ADATA, Kingston and Crucial were among the first manufacturer’s to show their DDR4 memory modules at Intel’s IDF 2013 conference which was held last year. It will still take some time for them to mass produce ram modules for shipment to server platforms by the second half of 2014.