Earlier today Creative Assembly released a video commemorating 15 years of Total War games. As well as stating that they would be present during EGX Rezzed (Formerly known as Eurogamer Expo) in London this weekend March 12-14th. At the end of the video which you can view further down, we hear something that doesn't really sound like it fits in the "normal" settings for previous Total War games. 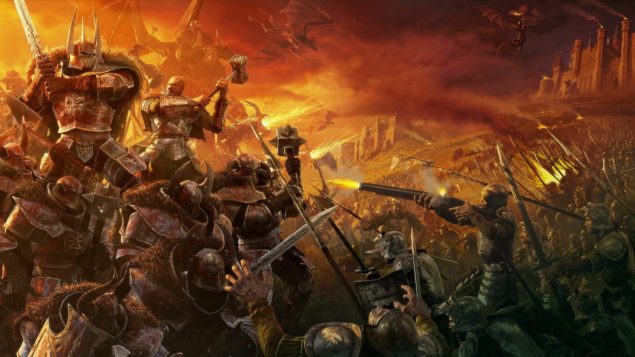 That Total War: WARHAMMER Was In Production Kind of Leaked Earlier This Year With A Photo

Earlier this year, back in January to be exact a user over at the Total War Center-forums made a thread in which he wanted to talk a bit about the upcoming book 'The Art of Total War' which he had gotten his hands on early. When reading said book he spotted something rather interesting on one of the pages as you can see below.

"Multiplayer has never been Total War's strong point in the past and that's something we're looking to radically change with Total War: ARENA. For most strategy games, multiplayer is almost all of the experience or, at the very least, a sizeable chunk of it. We're also experimenting with this in the mobile space, with Total War: Kingdom, and taking the series to the fantasy setting with Total War: WARHAMMER."

I've been pretty pumped since January about this, and now we might just get an actual announcement, Total War in a Fantasy setting, especially Warhammer could be extremely cool. Below is the Trailer they released commemorating 15 years of Total War, and the little tease is around the 2:33 mark.

Over at the Total War Facebook page they posted the following along with the video.

This year Total War becomes one of the longest-running series in gaming with 11 titles spanning over 2000 years of historical warfare. To celebrate this milestone we’ve released this trailer to reflect on our history, and give you a hint of what’s to come

Empires have risen, and many a brave warrior has fallen with an estimated 4.8 billion battles waged in the last 15 years.

Visit us at the EGX Rezzed show in London this weekend for some retro and modern gaming on all our titles, plus a huge Total War prize giveaway.

So yeah, hopefully there will be some form of news coming out of EGX Rezzed this weekend, so keep your eyes peeled.