Corsair is adding four new enthusiast aimed PC products to their inventory which include the latest Hydro series coolers, a beefy power supply unit with Titanium rating and a mid-tower gaming case which deliver more choices to builders to create an epic looking machine.

The four products that are being introduced today include the Corsair Hydro series H150i Pro and H115i Pro RGB coolers, the Corsair AX1600i PSU which is rated at 80 Plus Titanium efficiency and a mid-tower Carbide series Spec-Omega case. The details on these products are provided below.

To power the most amazing PCs, you need the world’s most amazing PSU, and the new CORSAIR AX1600i is exactly that. The AX1600i is the only enthusiast PSU to use Gallium Nitride (GaN) transistors, delivering superior efficiency, in a smaller form factor than ever before.

The best-selling CORSAIR Hydro Series of liquid CPU coolers also gets an upgrade at CES, with the launch of the new H150i PRO and H115i PRO. Equipped with 360° of RGB lighting on an aluminium-trimmed pump cap, ultra-low noise CORSAIR ML Series cooling fans, and large high-density 360mm (H150i PRO) or 240mm (H115i PRO) radiators, the new Hydro Series light up your system while keeping CPU temperatures down.

The H150i PRO and H115i PRO are also the first CORSAIR Hydro series coolers to feature a Zero RPM Mode fan profile, totally stopping and silencing the cooling fans when the CPU is at low temperatures. Combining the latest in customizable lighting with the best in low-noise CPU cooling, the H150i PRO and H115i PRO deliver advanced liquid cooling that’s seen but not heard.

Completing the CORSAIR CES 2018 line-up is the new Carbide Series SPEC-OMEGA, a mid-tower gaming case with a new angle on tempered glass. SPEC-OMEGA’s unique asymmetrical design provides a dynamic look, that’s enhanced by both a tempered glass side panel and front panel, putting your system on display like no other case.

An integrated front-panel LED light strip and LED-lit 120mm cooling further add to the dynamic styling, while room for up to a 360mm liquid CPU cooling radiator means there’s more to SPEC-OMEGA than looks. With an internal layout designed to make a build beautiful inside and out, PC builders will find a wealth of cable tie-downs, routing holes and grommets, with a choice of white, red or black exterior. Built to show off your system and turn heads, this is the ultimate SPEC. 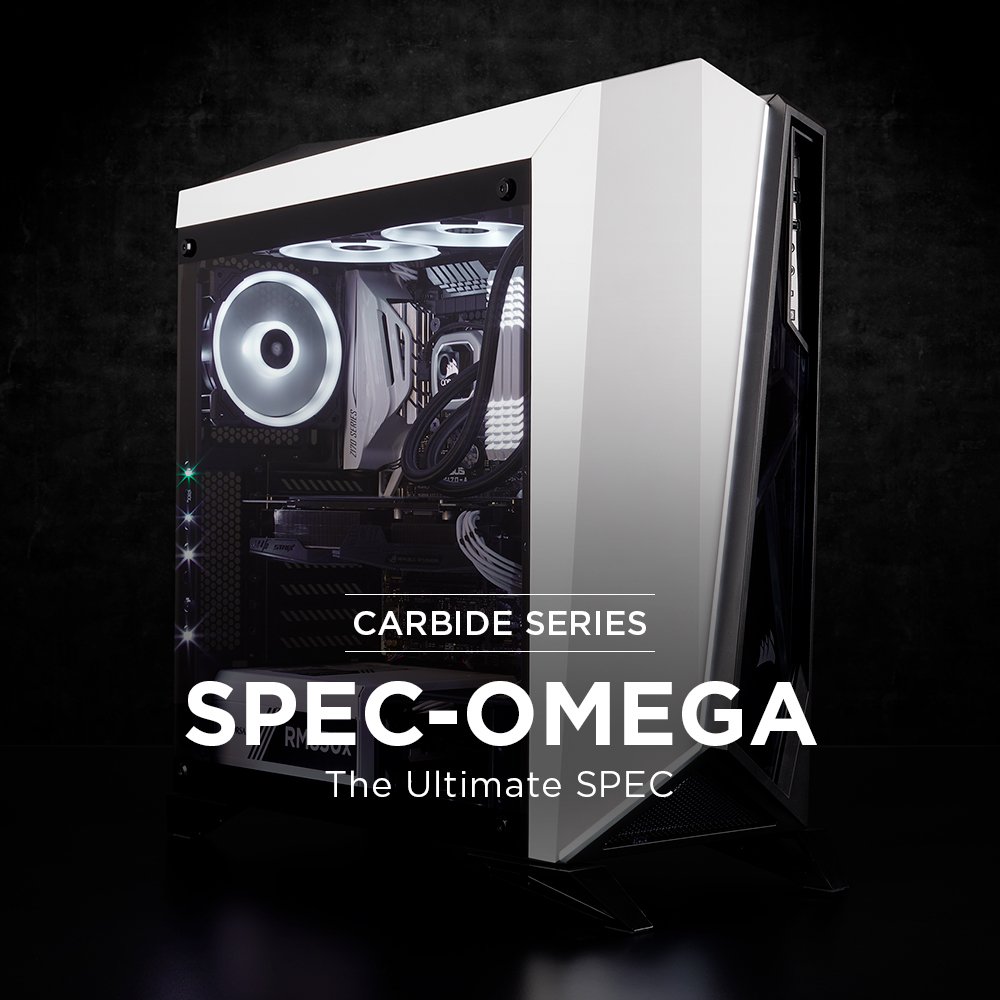