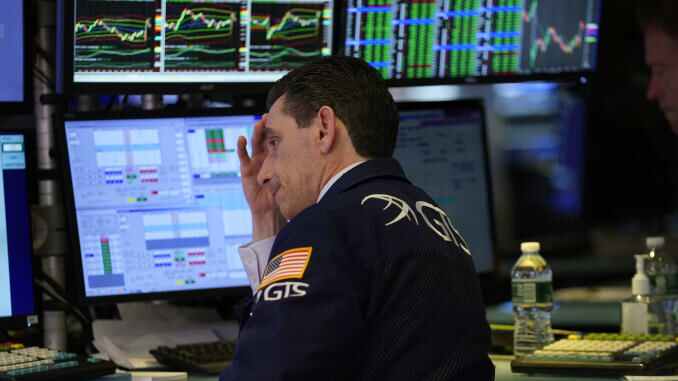 Coronavirus (COVID-19) pandemic continues to ravage countless communities throughout the globe, exacting egregious human and financial costs in the process. Accordingly, the Wall Street behemoths have been fairly busy in recent days in attempting to tabulate the financial impact of expanding lockdowns and quarantines instituted throughout the world in a bid to enforce social distancing.

Over the weekend, Morgan Stanley (NYSE:MS) came up with the latest impact assessment of the coronavirus pandemic on the U.S. GDP growth rate and the prognostication is nothing short of horrific. According to the Wall Street bank, the Q2 GDP growth rate in the U.S. is likely to plunge to a depression-era level of -30 percent! In coming up with this number, the bank revised its earlier projection – consisting of a 4 percent hit to the applicable quarter’s GDP – downwards by nearly 8 times.

The relevant excerpt from this report states:

“We now see 1Q GDP dropping by 2.4% as economic activity has come to a near standstill in March, followed by a record-breaking drop of 30.1% in 2Q.”

Morgan Stanley explains the impact of the coronavirus pandemic on the U.S. GDP in the following words:

“We assume sharp declines in areas of consumer discretionary spending like travel, dining out, other services and motor vehicle spending among others. This will leave a large hole in consumer spending in 2Q, when we expect real personal consumption expenditures to contract at a 31% annualized pace.”

Morgan Stanley also expects the U.S. Bureau of Labor Statistics to report a net decline in total nonfarm payrolls in March by an astounding 700,000 due to the shutdowns instituted to combat the coronavirus pandemic:

Finally, the bank estimates the impact on global growth to be far more pronounced than was the case during the financial crisis of 2008-09:

“If the COVID-19-related economic disruption continues into 3Q20, in the bear case scenario we see global growth contracting by 2.1%Y in 2020, which will bring the global economy well below what we saw during the global financial crisis, when global real GDP contracted by 0.5%Y in 2009.”

These horrific prognostications echo those made over the weekend by the President of the St. Louis Federal Reserve – James Bullard. In an interview with Bloomberg, Bullard noted that the U.S. unemployment rate may reach 30 percent in Q2 2020 along with a drop in the quarter’s GDP growth rate to an astounding -50 percent due to the impact of the coronavirus pandemic! In order to avoid this precipitous decline, Bullard called for a potent fiscal response designed to plug an expected $2.5-trillion-hole triggered by lost incomes.

Bear in mind that the U.S. lawmakers have been working feverishly on a $2 trillion rescue package to assist households and corporations in dealing with shutdowns and demand-side shocks emanating from the spread of the coronavirus outbreak. However, on Sunday, the pertinent bill was blocked by Senate Democrats on concerns of its lopsidedness that favored corporate America over the U.S. households. While the bill did include key Democrat demands of a $250 billion expansion in unemployment insurance coupled with $350 billion for small businesses, disagreements emerged over the call by Democrats for instituting stronger protections for workers. Moreover, the Democrats believed that the GOP bill included “very weak” restrictions on share buybacks for companies availing these taxpayer-funded facilities.

Nonetheless, the bill did include certain measures designed to alleviate the hardships being faced by American households due to the economic dampening effect of the coronavirus pandemic.

The Treasury Secretary Steve Mnuchin said during a “Fox News Sunday” interview that:

“Average direct deposit or check for a family of four will be approximately $3,000 — a bridge for them to get through this quickly.”

Even as the fiscal stimulus efforts continue to progress at a glacial pace, the Federal Reserve has been throwing everything, including the proverbial kitchen sink, at the American economy in order to prevent a full-blown meltdown amid the coronavirus outbreak. As an illustration, the lender of last resort has instituted following measures in recent days:

James Bullard explained the impetus behind these frantic steps by the U.S. Federal Reserve in recent days in the following words:

“This is a planned, organized partial shutdown of the U.S. economy in the second quarter. The overall goal is to keep everyone, households and businesses, whole [with government support]. It is a huge shock and we are trying to cope with it and keep it under control.”

Note: The article has been updated to include the slew of measures announced by the Federal Reserve on the 23rd of March 2020.