Chengzhi Zong, the founder of the AOKZOE, the console manufacturer behind the upcoming  A1 handheld gaming system, recently took to YouTube to show the delivery of the company's first batch of AMD Ryzen 7 6800U CPUs that will power the device.

AOKZOE CEO unboxes over 3,500 AMD Ryzen 7 6800U CPUs for the A1 handheld console as part of one of the company's crowdfunding stretch goals

In the video, the initial set included twenty-two boxes of the AMD Ryzen 7 6800U CPUs, with five trays and thirty-two AMD Ryzen 7 6800 CPUs. In calculating the total, the delivery is estimated to have had 3,520 processors, making this one of the biggest tech unboxing videos ever made.

The AMD Ryzen 7 6800U CPU is manufactured for low-power systems and devices, making it a perfect candidate for the AOKZOE A1 handheld gaming console. The CPU offers 8-cores, and 16-threads based on the Zen3+ core architecture and is part of the Rembrandt APU lineup. The same chip will also feature twelve graphics Compute Units (CU) based on the RDNA 2 architecture.

In the video below, the AOKZOE CEO takes special care unboxing the new processors and ensures consumers and viewers that they have technicians on standby as he opens one of the AMD Ryzen 7 6800U CPU bricks. 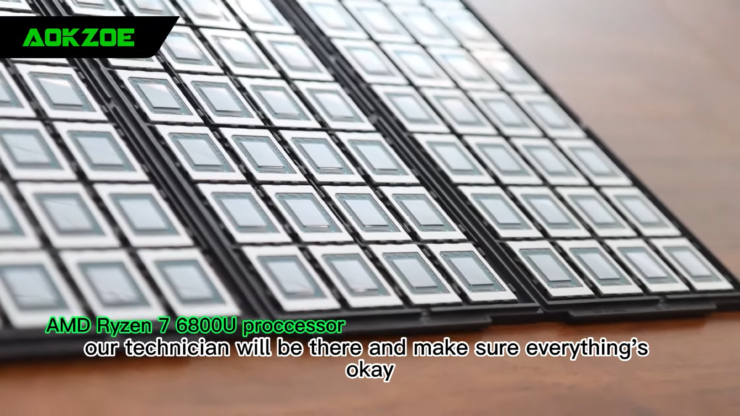 AMD Zen and RDNA2 APUs were initially seen in powerful gaming consoles like the Xbox and Sony's PlayStation 5 systems. Now, we are beginning to see wider use in more designs, such as the latest handheld systems by Valve, GDP, Onexplayer, and even AOKZOE.

The new AMD Rembrandt series is in high commodity in the tech market for computers and devices in that the new processor is mighty and highly efficient, especially for a mobile CPU. Before, the only options were weaker chipsets, as the higher 45W mobile CPUs would drain internal batteries on devices due to the power demanded by the processors.

AOKZOE initially discussed their product earlier this year and publicly stated that they would begin shipping their new console in September. It appears that the company is on track as of right now, and consumers who are assisting with crowdfunding will be able to start gaming next month.

To learn more about the AOKZOE A1 console, check out the company's official website, where you can still preorder the new handheld until August 26, 2022, on Kickstarter.