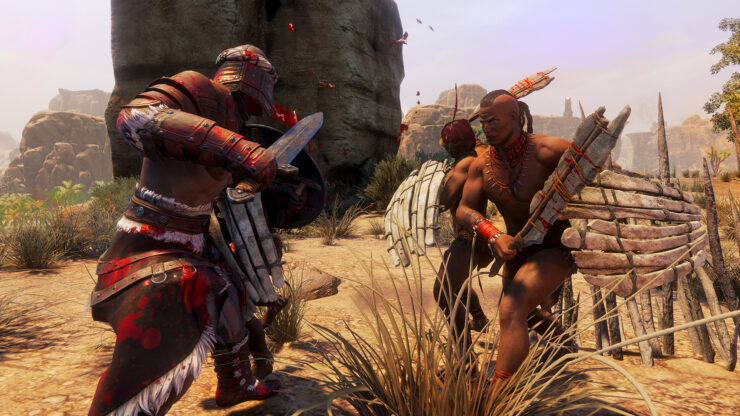 If you build it, they will come…..and break your stuff and put your blacksmith in the Wheel of Pain. That's Conan Exiles, the new survival multiplayer game by Funcom which recently entered Early Access on Steam.

Wccftech: First things first, tell me a bit about Conan Exiles and how it differs from your previous Conan game, Age of Conan?
Lopez: Conan Exiles is a survival sandbox MMO. Your main objectives in the game are to survive first, to build an empire, and to thrive against other people. It’s a different setup than what you would get in Age of Conan. Age of Conan is an MMO with a different sense of progression and activates that you do in the game. In this game [Conan Exiles] your activities revolve around food and water and building a base, building better tools to fight. You adventure out to find more material to make even better weapons, castles while taking on other players. The two games are completely different genres and we are making sure we are letting players before jumping that this isn’t a sequel to Age of Conan but its own thing.

Wccftech: Since base building is a huge element of Conan Exiles, could you explain what sort of effect this will have on player vs player? More importantly, what are the benefits of spending time and resources to build a base?
Lopez: First, you want to build something to keep your stuff safe. As you play through the game you will amass wealth in the form of resources you gather. You also want a safe place to place your bed which works as the respawn mechanic. If you don’t have a bed, you will respawn in the beginning of the game which could be quite a long way back. The idea is to have a safe place for your bed and a safe place for your chest and the contents of the chest. You will also need a place to put your crafting stations that will help you expand and make an even bigger base. 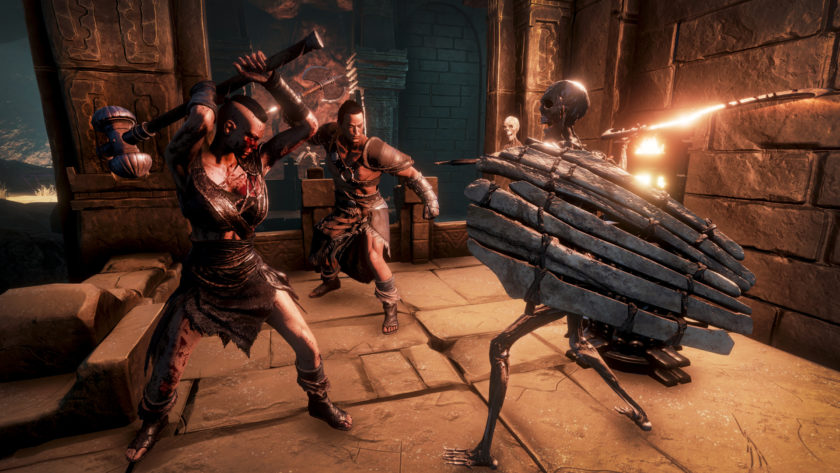 Wccftech: To build a base, are there designated areas?
Lopez: You can build anywhere with the exception of a few areas where it is forbidden to build because they interfere with certain mechanics of the game. There’s one area that is a spawn point for certain NPC so you can’t build on top of that. I think about 90% percent [of the game world] is completely open to building on. Once you place an object down, it forbids other people from building there. The more you expand the less room there is for other players. Fighting for land becomes an important aspect of the game.

Wccftech: Knowing that Player vs Player is a big mechanic, how can you defend a base when you’re not online 24 hours a day?
Lopez: The strength of your defenses change drastically with the higher tiers of equipment you can build. Players have to spend resources in order to take down your defense such as crafting explosives in order to get into the base. You also have the means to create structures to make it very difficult to get into the base.

Wccftech: Is there a siege gameplay mechanic happing here? Do I need to break down the front gate or blow a wall?
Lopez: It depends on how the base is built. An important part of base building is figuring out what’s a good shape for your base to make it impregnable. Even though no base is truly impregnable. (laughs) Since we are aware that you can’t be online 24 hours a day, we are adding a mechanic where you can specify PvP windows as a server setting. For example, you can set it where you can only damage structures from 6-10PM. We are making sure we are giving players enough server settings so they can whatever ruleset they feel are fair or fun for playing.

Wccftech: Speaking of servers, how many players can be in one and will people have an option of hosting their own private servers?
Lopez: The maximum number of players right now on a server are 60. Which should be a big enough number if you just want something with your friends. If it’s more than that you should be ok. You can rent servers from server providers and you can specify whatever rulesets you want that will change a lot of the aspects of the game, we are adding more and more server settings to the game that you can modify. We want to players to enjoy the game however they want.

Wccftech: You mentioned before about Player vs Environment, is there going to be an offline or a story component to Conan Exiles?
Lopez: There’s no guided story arc for the game. What we have is a rich setting for a game with a lot of lore and story beats that you can discover via talking to NPCs or discovering ancient tablets in the world. The narrative is fragmented and you have to put together on your own with your adventures. It’s similar to what Dark Souls does with its storytelling, the world has a lot to say. 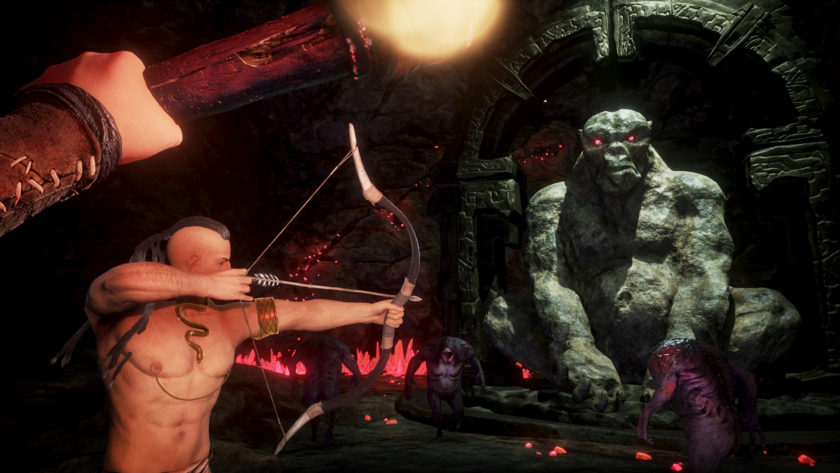 Wccftech: What sort of challenges will players face if they decide not to take part of the PvP?
Lopez: There are wild animals like snakes and rhinos. There are also monsters like dragons and giant demons. You will also find human enemies to fight against. These are exiles, like you, some are NPCs that belong to their own factions and have their own camps.

Wccftech: Can you attack these NPCs?
Lopez: Not only can you attack them, but you also knock out unconscious and drag them back to your base and turn them into workers that do stuff for you.

Wccftech: So you can essentially have your own thriving community of NPCs that you “recruited?” Can you assign these people to specific tasks?
Lopez: They already know what to do depending on what their profession was before you captured them. You can find a guy who was an archer or a blacksmith and they will have jobs in your base already. A blacksmith for example, you capture him and put him on the Wheel of Pain like in Conan movies and he becomes your blacksmith. He is assigned to a blacksmith station and improves the station. There are a lot of NPCs in the world.

Wccftech: Then could you do the same thing to another player’s NPC in their base? Can players essentially launch raids for useful NPCs as opposed to just trying to destroy a base?
Lopez: As of right now it doesn’t work like that, it is our intention to do that in the future since we are still in Early Access. Workers or Thralls are pretty much loot you can get from taking on other people’s bases. 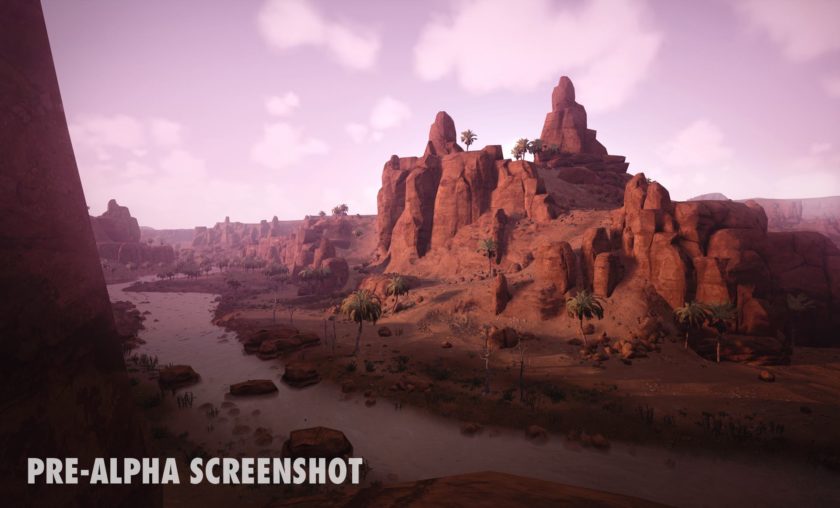 Wccftech: How’s Early Access been working out for you guys?
Lopez: It has been a tremendous success for us. We did not expect the amount of traction the game has gotten. We are playing close attention what people are doing in the game and following standard feedback channels like Reddit or the Steam forums. We also look at Twitch a lot and see how people are playing it and the way they play it. Right now we are basically working on a gigantic content patch for Siege. A lot of what we are doing now is a direct response to how people are playing the game.

Wccftech: Are we expecting to see things like battering rams and trebuchets?
Lopez: We are putting out trebuchets which you’d have to set a counter-weight and do range-finding. You can load them up with different types of ammunition like boulders or corpses. You can actually gather corpses put them in a corpse locker to let them rot and load the trebuchet with them. When you get hit by a corpse it leaves a poison cloud, it’s a good way to get people out of the bases and fight them in the field.

Wccftech: It’s good to see you’re not shying away from biological warfare.
Lopez: (Laughs) Anything goes. We are also looking to add other elements to Siege. We always wanted to find a way to add vertically to the siege game. We’ve seen how the community found ways to scale walls using exploits or other creative ways. We are toying with the idea of using tiger claws to climb walls or using grappling hooks or ladders. This way we add a legitimate way (laughs) of getting over a wall.

Wccftech: You’ve recently announced a console release for Conan Exiles?
Lopez: We are releasing an Xbox One version for third-quarter of this year in the Xbox Game Preview program. We are set for release on PC, Xbox One and PlayStation 4 in Q1 of next year.

Wccftech: Great, thanks for talking with us!
Lopez: Thank you and we hope you check out Conan Exiles.