The data recorded by comScore is driven from the three months that started of in early December and closed by the end of February. In this time period, Apple's market share dropped by 0.1% comparing it from the the previous quarter that ended in November with a total market share of 41.8%. Not too drastic of a change but a trend can be seen following the launch of Apple's recent flagship, the iPhone 6 and 6 Plus. Lets head down to some detail below for other manufacturers and their rankings.

Apple For Hardware, Google For OS - Leaders In The U.S

Following this minor decrease in Apple's smartphone share, Android gained 0.2% of the total platform share advantage over its rivals. The second place in the hardware category belongs to Samsung with a 28.6% of market share after Apple. Samsung has had a rougher year compared to Apple as it lost 1.1% of slice from the total pie. The pattern for Samsung was disappointing which will most likely be coped with its recently launched Galaxy S6 and S6 Edge.

The remaining out of the total share belongs to LG with 8.3%; Motorola with 5.1% and HTC with the least 3.8%. LG boosted their game in the hardware category and gained 0.7% in its race compared to the previous quarter. Motorola dipped with a 0.1% and HTC went up by the same ratio.

As mentioned before, Android picked up pace by adding 0.2% to its share while Apple with its iOS dropped a minor 0.1%. Judging by the stats and the time period involved, it seems iOS 8 did not left an equal mark as that of its previous iOS 7 version which by far moved mountains. Hence, iOS share dropped to 41.7% from 41.8%. Microsoft with its Windows OS moved up by 0.1 and holds 3.5% of the OS share of the U.S market. Blackberry on the other hand lost a couple of points from the previous quarter, 2.0% to 1.8%. 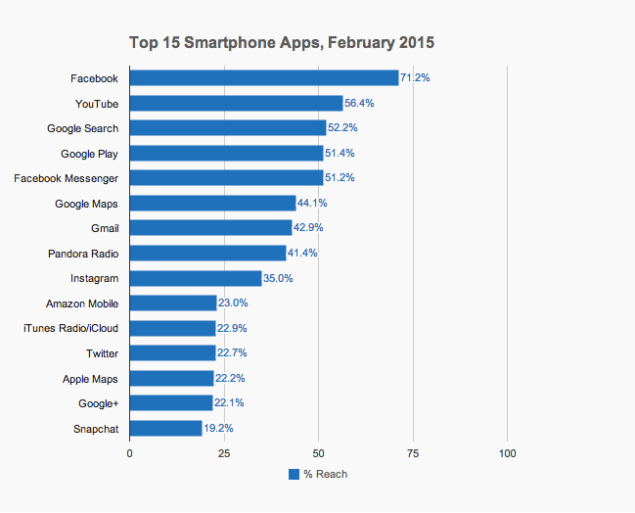 comScore also revealed the most popular applications for the same time period. The stats to each app is given as can be seen in the image above that represents percentages out of a hundred of the most popular applications. It seems Apple is still the best in its hardware department and Google seems to lead the way in the software category. D o let us know what you feel about your favorite manufacturer and OS that are included in the list.