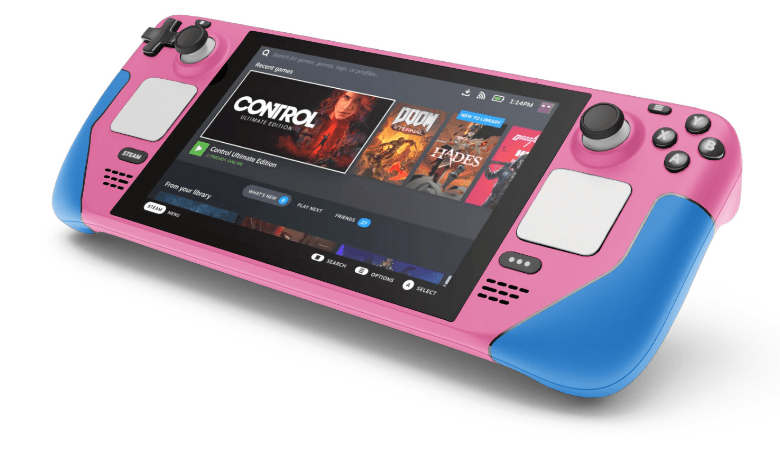 The Steam Deck is continuing to intrigue the gaming community at large. At the end of the day, people are comparing it to the Switch (despite Gabe Newell's wishes). So, maybe this set of news might be further fuel to the fire... But, it has been said that depending on the reception of the handheld PC, the color variety of the Steam Deck might be increased.

In a recent interview with PC Gamer, Greg Coomer and Tucker Spoffword, both of which worked as designers of the Steam Deck, said that different color options has been a hot topic internally. Coomer mentioned that there were talks about the creative direction regarding the Deck itself. "There was a lot of debate," Spofford told PC Gamer. With Coomer chiming in to say: "And even discussions like 'well, can we have lots of colors?' We had all those discussions. We are continuing to have those now."

According to Coomer, the decision to launch the Steam Deck with a wide variety of colors is based purely on logistics. "Having a lot of SKUs in the market is just a lot more complicated. There isn't really a better reason than that for right now." So, that's the reason why the Steam Deck will only be available at launch in Black.

However, Coomer also added that the team "might do a lot more with that in the future; if this gets off the ground the way we hope it does, there's just tons of opportunity to do that later." In other words, depending on the success rate of the Steam Deck, we might get some cool color variety options much like... Well, the Nintendo Switch.

It only makes you wonder what kind of crazy color schemes would be coming to the Steam Deck. Maybe a Dark Blue one? That would be pretty rad. Or maybe something a little bit fancier, like a dark blue color scheme with a Neon motif. Tell us some of your ideas in the comments; why not? It's fun to speculate.