Yesterday, the first codenames for AMD Volcanic Islands series of Radeon graphic cards appeared inside a leaked catalyst driver. Semiaccurate has done a detailed analysis regarding the leaked codenames and has come up with some really interesting details.

The codenames that leaked yesterday are provided below:

Now according to Semiaccurate, the Hawaii GPU would consist of three variants under the Radeon "Discrete desktop" brand and three variants under the FirePro "Workstation" brand. It is detailed that the Gemini name is used internally by AMD for dual-chip graphic cards so its possible that the Hawaii GL Gemini is a dual-chip server card like the current FirePro S10000 but its not based on the Hawaii XTGL variant but rather the cut down GL40 variant which would have some compute units disable, it is mentioned that the "40" number in the codename could represent 40 CUs which means 2560 cores in the Hawaii GL40 GPU. Could this mean that the full variant of the Hawaii core would have even more CUs on the XTGL GPU?

Coming to the Radeon lineup which consists of three parts, the flagship Hawaii XT followed by the Hawaii Pro model and Hawaii LE. The driver has also listed some never been heard of codenames which include Vesuvius, a Volcanic Island and a Sea Islands called Tonga located just past New Zealand. The New Zealand codename has also appeared in the driver which might seem confusing since AMD renamed their New Zealand reference HD 7990 card to "Malta" so it could be possible that New Zealand may eventually become a Dual chip card within the AMD Volcanic Island series.

AMD should launch or atleast clarify these reports regarding their upcoming generation of Radeon cards since alot of people want to update from their HD 7000 series cards that released more than a year ago. For now, we can just hope that AMD launched the new card around the same time as Kaveri APU for desktop.

Following image is courtesy of Semiaccurate! 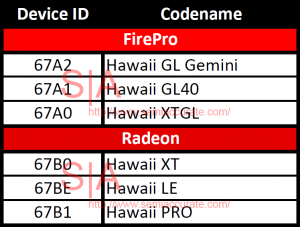