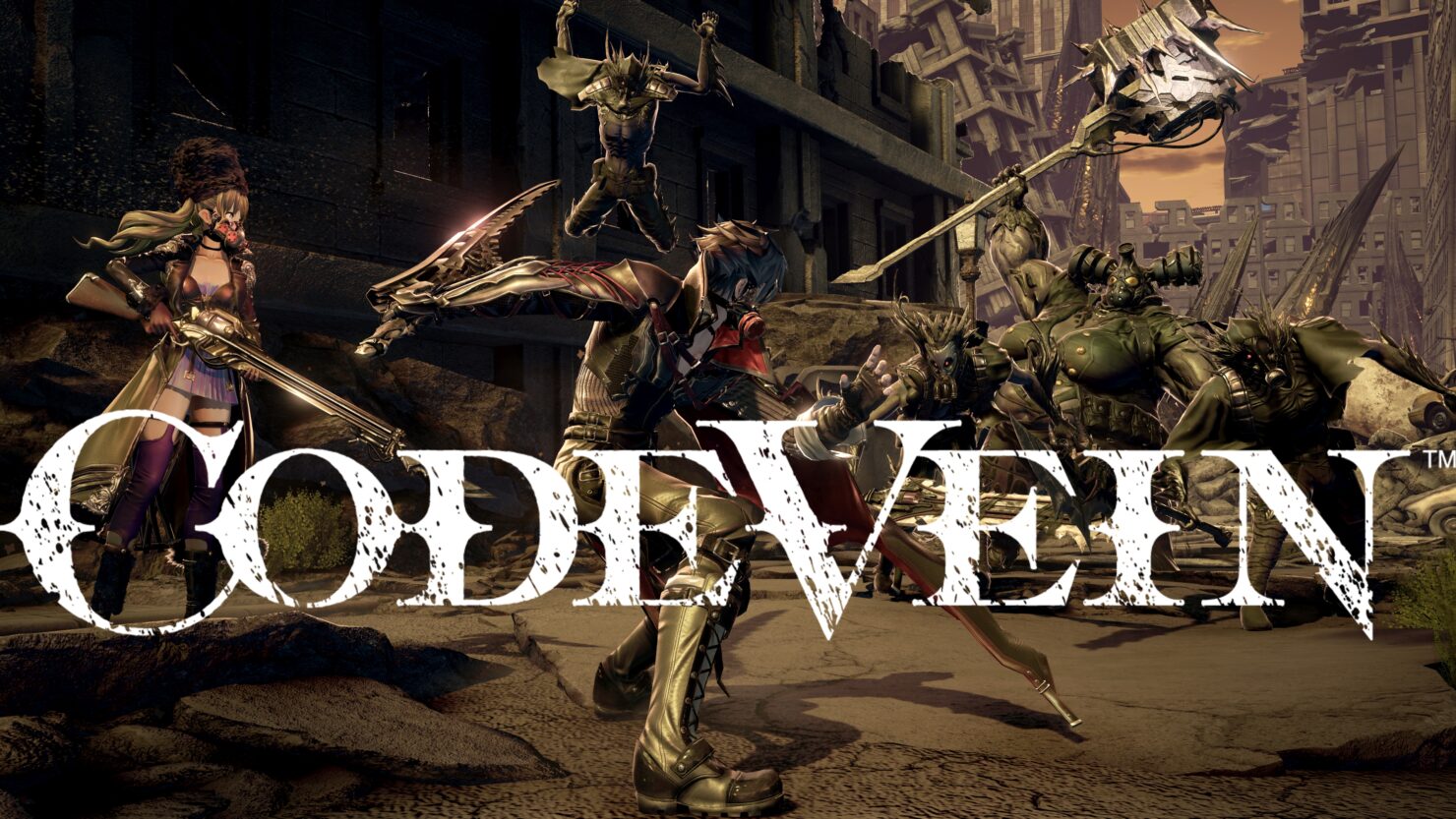 Bandai Namco could rightfully be feeling a little sorry for themselves. They published the games that started the Soulslike trend and now the developers, From Software, seem to have moved away from one of the publishers which took a stab at Demon's Souls where others wouldn't. The last two Soulslike games by From Software went to Sony and Activision respectively, so while the iron is reasonably warm it's time for the original publishers to jump in with a game that is a bit different. Introducing Code Vein, the offspring of Animé and whatever makes a Soulslike, with a great topping of style.

So now I've already failed in my attempt to not mention the somewhat significantly sized breasts featured in Code Vein, something I feel I should explicitly say I'm not against, I should actually be fair and talk about the game itself. Why? Well, because I genuinely enjoyed the time I spent with it. 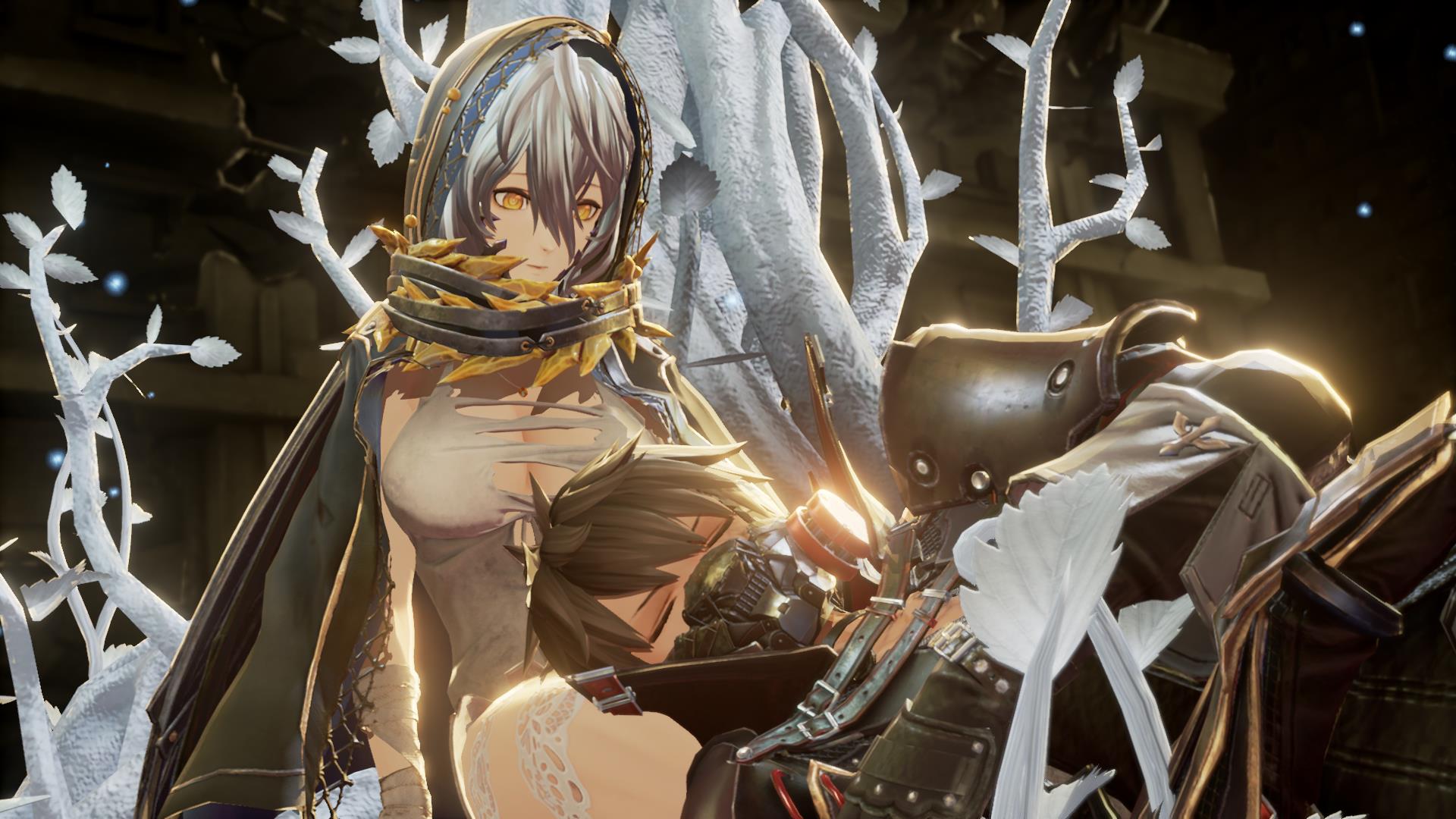 There's always something to be said about style. Especially when that style is backed up by a decent amount of substance. That's precisely the best way to think about Code Vein. You're going to find a lot familiar here. Enemies require a decent amount of planning. This is often in the form of dying, to then return with the knowledge of their attack patterns and what type of attacks you can return with to maximise your chances.

Though this may be oversimplifying what is a fast-paced and engaging combat system. Unlike almost every other Soulslike game, you have a myriad of options at every given point. Your main character, custom created with a wealth of options at your disposal, is unlike all others in the world. You have the powers of... special blood? I'm not quite sure. What I know is that things called Blood Codes essentially act as classes within the game and you're not limited to just one. You find one, you know it. Once you know it it's just a matter of changing to it at will.

Each Blood Code also comes with its own unique gifts (abilities/skills). While a large number of these are unique to a particular Blood Code, some such as boosts to health or stamina can be equipped with any of the codes. While there are restrictions that come with the codes, so using the Ranger code limits your strength, so you won't be wielding a huge sword that's as big as you. However, with the change in your stats, your ranged attack will have improved, as will your speed and proficiency with lighter weapons. Much the same if, for example, you pop on the Berserker Blood Code, you'll find that the hammer the size of my car is suddenly very easy to wield, swinging it around with ease.

Still, enemies are brutal in their strength and speed, though they do have noticeable attack patterns for you to learn and adapt to. You'll also want to adapt to the environment you're fighting them in too. Use natural barriers to give yourself a bit of breathing room to heal up using your limited-use healing item that fully recovers when you visit a Mistle. When you kill an enemy, you get Haze as a reward, which you can use as currency or to level up or learn new abilities while at a Mistle. You're not going to find much that fundamentally deviates from the Soulslike formula aside from the fact you can swap and change your Blood Code and abilities at will. 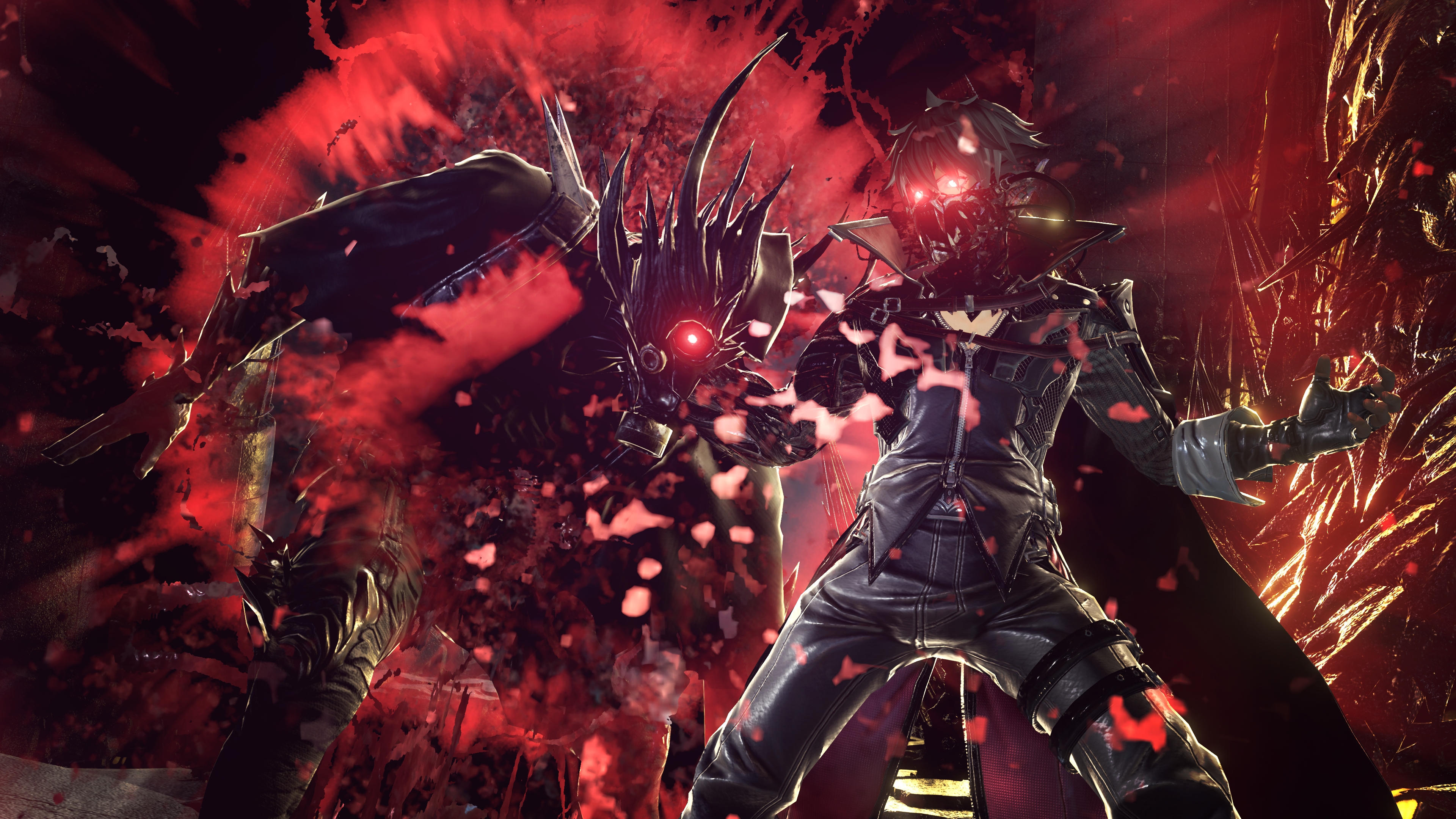 The fact that you can swap and change between these Blood Codes, as well as the weapons and Blood Veils (armour) at will, makes for a much more open and approachable game. You're not fixed into one simple style of fighting, enabling you to not only learn attack patterns but to also adapt to them with your own abilities and style. You're still going to come across both normal enemies and bosses that feel like you're fighting a brick wall, waiting to see which will give first. It's just that now you've got a few extra tools to weaken the structural foundation of that brick wall.

Going into a few extra details of those tools we have the weapons and armour, or Blood Veils in the case of the latter. Weapons are pretty much as standard. They have requirements from a certain stat, the stats seem to be tied both to your character level and the current Blood Code equipped. Each weapon has its own attack and speed values, with certain abilities only being usable with specific weapons equipped. Blood Veils, of which you'll be given as rewards or as loot you can pick up in the game, are a little different. They do directly impact your stats, as armour tends to do, but they also are specialised towards certain Blood Codes. Matching these can give a valuable boost towards your abilities.

Another truly invaluable tool comes in the form of an AI companion. From what I can tell, it looks as though you'll spend most of your time with Mia. You meet her early on, rescue her - after she rescues you - and it seems she'll be joining you on your journey through a land infected by some sort of blood curse, curse, virus or... you know what, I don't honestly know. I was more interested in the fight. All I know is that the world is messed up, people who don't get blood become feral and you seem to have magical blood which brings trees back to life. Are they vampires? Anyway, I'll get to explore the story when it's time for a more in-depth hands-on, which will be review/release time. 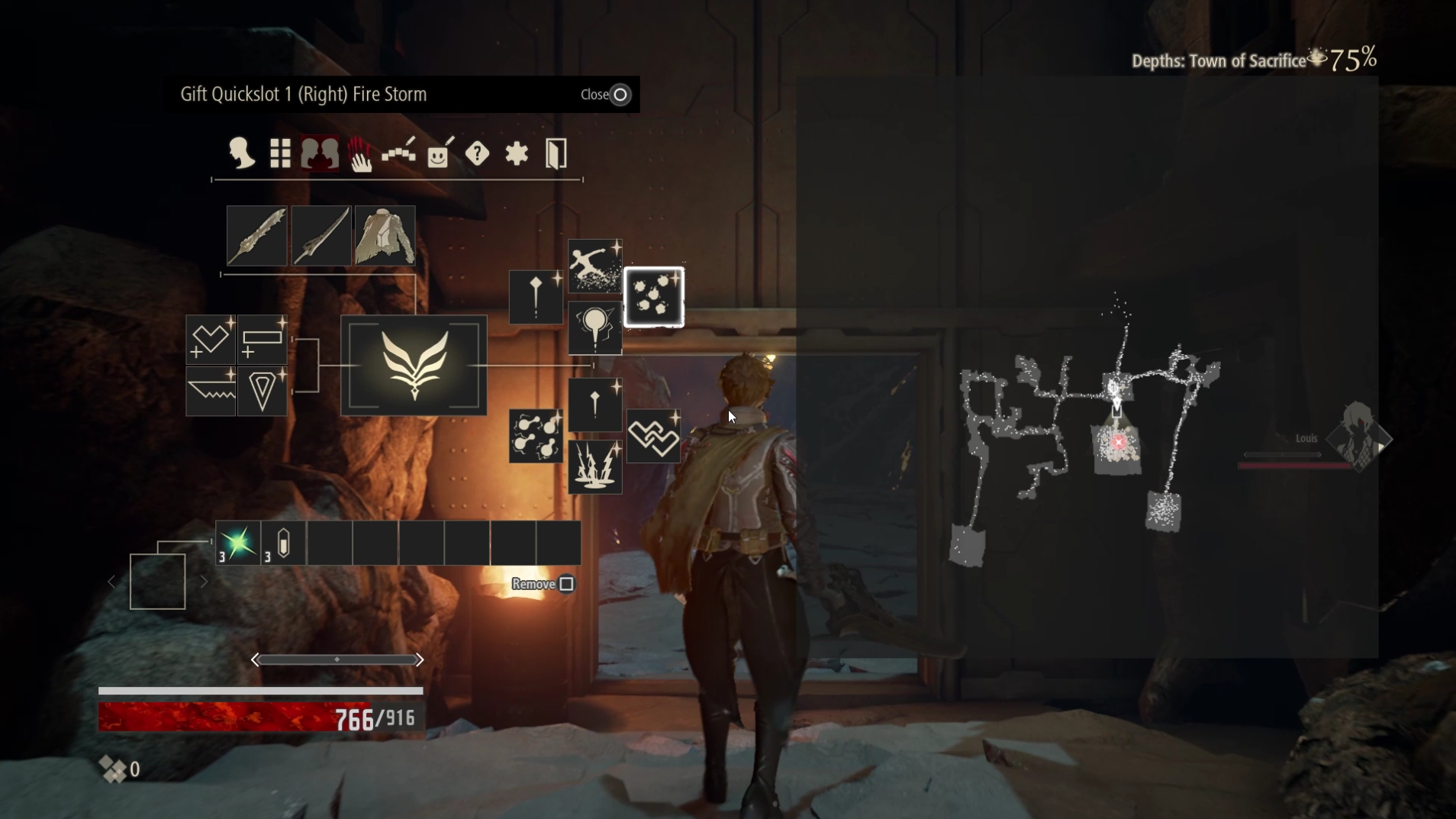 What I did see intrigued me, but I had to prioritise the time I had. That meant more exploring the combat and the layout of the world itself. Rather than the souls of the dark variety, this has a more demonic take. This is to say that rather than there being one huge interconnected world where you can seamlessly move from one path to another, you have separated paths that you choose to move into from the central hub. The central hub, which I was able to explore, features a shop, a weapon manufacturer, a new other NPC's and at the time a bar with nobody serving drinks, something I hope is rectified if, by chance, you save somebody along the way.

Honestly, for the most part, I found myself going for a weapon that looked cooler, rather than was more functional. In other words, I had a big sword that in the game was one-handed. My secondary weapon, as you can have two weapons to quickly switch between, was a big sword. A big sword is essentially something big enough to cleave Lady Liberty apart. It all works with the Animé aesthetic that Code Vein goes for. What is an Animé swordsman if not cool?

All of this works with the very extensive customisation system too. First, choose your gender. Then after you've scaled your body, creating the build of the character you want, you have more options in hairstyles plus hair extensions, scars, tattoos and even more. The character I created during the event was actually pretty boring to say the least, though I minimised my time in character customisation so I could explore the game. When it's launched, I look forward to having a Kenpachi of my own. That or creating a character I'm going to enjoy looking at throughout my adventures in the game. 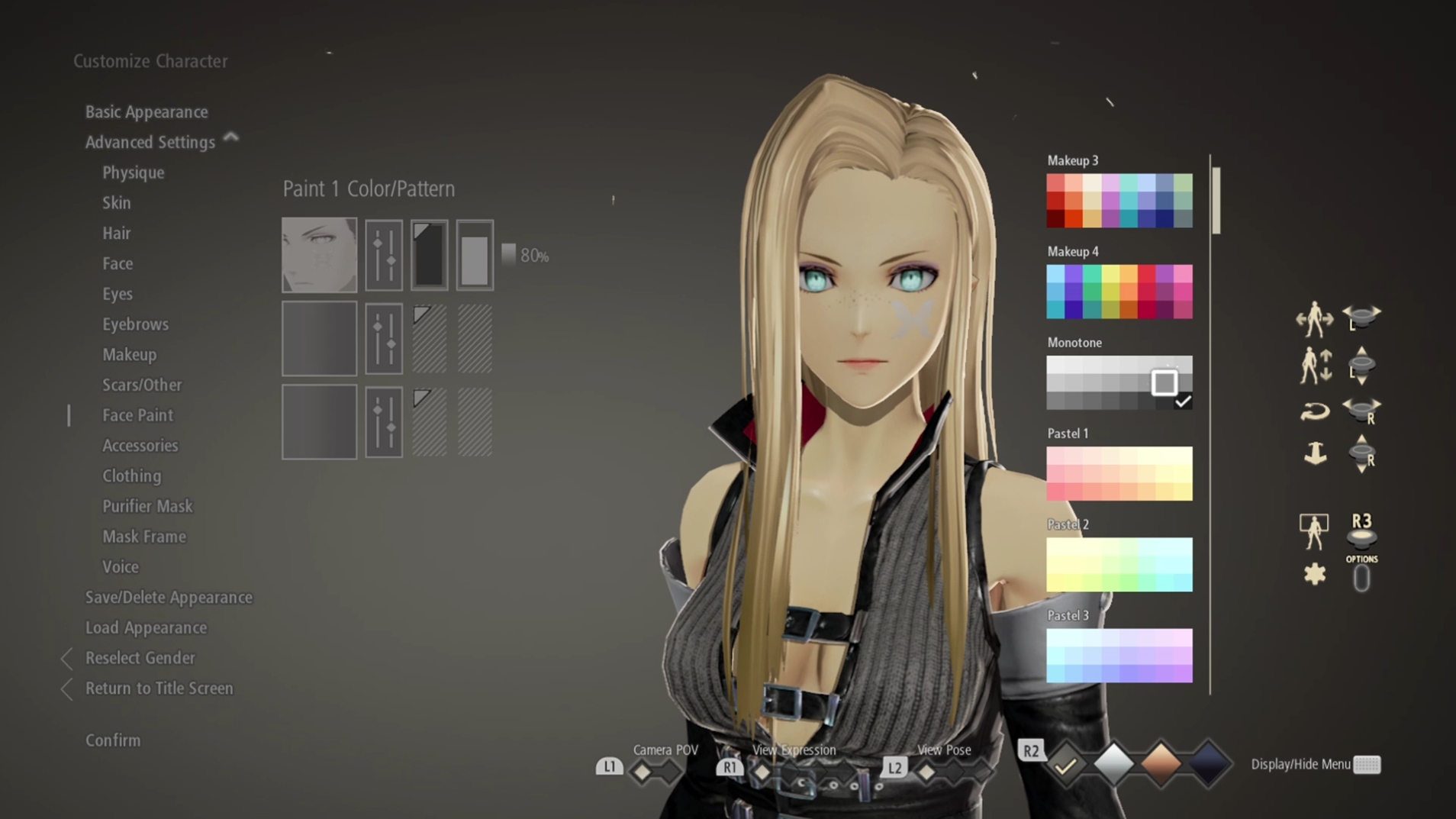 After finishing the one story element of Code Vein during the preview event, there was the option to go into a more challenging area, face off against considerably more difficult enemies and bosses. After an hour of challenging myself, levelling up through the huge amount of haze gained through normal monsters, I actually got to the point where one of the bosses finally beat me when it was at 10% health. Not quite the victorious story you would normally end on, but it was this that really let me know how much I was going to enjoy Code Vein when it's released.

It was a game that, despite the more fast-paced combat, required thought. Blocking, manoeuvring and striking, managing your stamina as well as your ichor - an element that acts like mana, used when activating abilities - is a constant thought. Getting to a higher level helps this, as do some passive abilities, but it should always be on your mind. Plus, going back to something I said earlier, style helps. It all looked fantastic, from the attacks of enemies and yourself to the environment, it's all enhanced by the design.

So am I looking forward to Code Vein? Yes, I am. When will it be released? I don't know. Sometime in 2019 for the PC, PlayStation 4 and Xbox One after originally being scheduled for a September 2018 launch. The extra time certainly looks like it's been worth it.