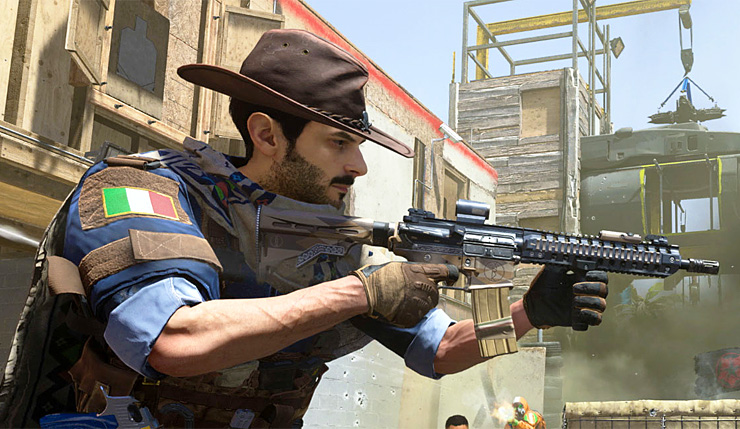 Call of Duty: Modern Warfare/Warzone Season 6 is still a ways off, but Activision and Infinity Ward are juicing up Season 5 with a new “Reloaded” update. Season 5 Reloaded will deliver a new Operator, weapon, Warzone mode, and other things you’d expect from a CoD update, but it also brings the unique new “Games of Summer” event.

Obviously originally meant to coincide with the now-postponed 2020 Olympics, Games of Summer challenges CoD players to represent their country in a series of single-player minigames – perform well and you can earn medals and various rewards and contribute to your country’s overall ranking (don’t worry, Activision is handicapping things so somebody other than the USA could possibly win). Here’s your CoD: Modern Warfare/Warzone Season 5 Reloaded roadmap (click for full resolution). 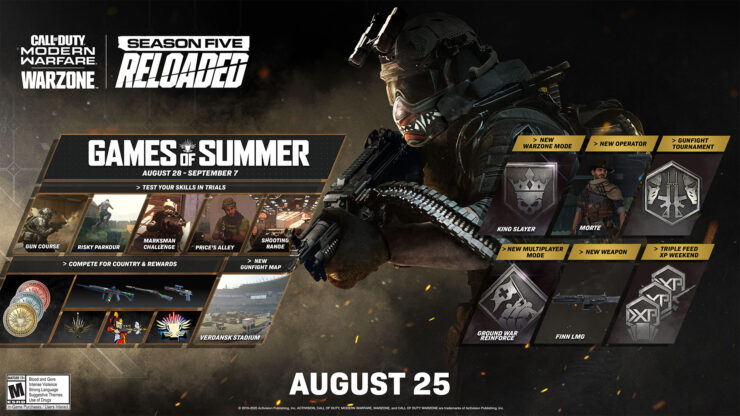 And here’s a more in-depth description of all the Season 5 Reloaded content:

King Slayer is large-scale Team Deathmatch on Battle Royale where teams fight to earn points by defeating hostile players. However, the circle doesn’t collapse, rather it moves around the map for an agile battle on the go. The top five team’s top scoring player will be marked as a ‘king’ on the Tac-Map. Eliminate kings to get additional points and be awarded a free Killstreak.

In this Ground War mode variant, three flags are positioned towards the center of the map, in a similar manner to Domination mode. If you or a teammate are downed, you enter Spectator mode instead of respawning, rejoining the battle only after a new flag is secured by your teammates. Claim all three flags and you win the round. Win enough rounds, and your massive platoon will all earn the victory.

What’s Games of Summer without a tournament? Gunfight Tournament returns as a head-to-head test of gun skill, map knowledge, and coordination, and a proper tournament deserves a Stadium. The pitch level of the larger Stadium has become available for Gunfight. It’s a much smaller play space in the Gunfight mode, so remember to use those tents, crates, and other obstacles for cover, especially if an Overtime flag is on the line. Gunfight tournament winners will be rewarded with XP, high tier cosmetic rewards, and bragging rights as victors of the summer tournament. All players can join in the tournament during the Free Access Weekend from August 28 to September 2 featuring the Gunfight Tournament playlist.

A spaghetti western-loving gunslinger will come to town, ready to lay down the law for the Coalition. His name is Morte, and he’s Warcom’s newest recruit found in his own Store Bundle arriving later this Season. Sergio “Morte” Sulla hails from Italy, is a skilled tracker who loves the Old West and strongly adheres to his own rules regarding right and wrong. Served with the legendary Col Moschin paratrooper regiment in Italy before being selected to join Warcom. 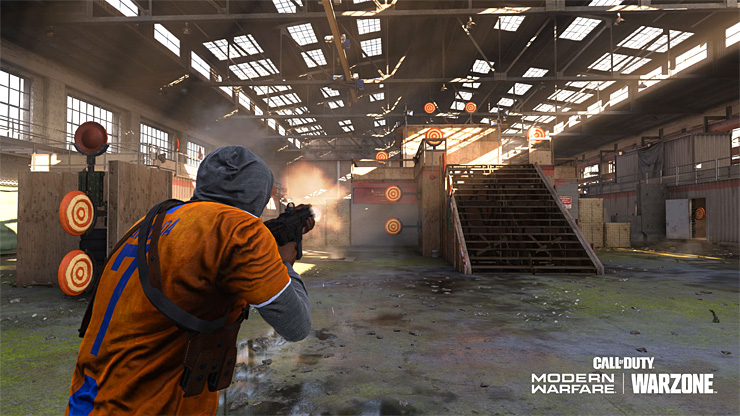 Finally, a bit more detail about the Games of Summer event:

For the first time in CoD franchise history, community members from around the world – both those who own Modern Warfare and free-to-play Warzone – will be able to represent their country in easy-to-play, hard-to-master, single-player Trials of skill. By earning medals in each Trial, CoD competitors will prove which country’s Tier One Operators are truly the best in the world. Within Games of Summer, there are five Trials. These miniature experiences are similar to those introduced at Modern Warfare’s launch and in post-launch Season updates.

Call of Duty: Modern Warfare/Warzone are available now on PC, Xbox One, and PS4. Season 5 Reloaded kicks off today, and the Games of Summer event runs from August 28 to September 7.