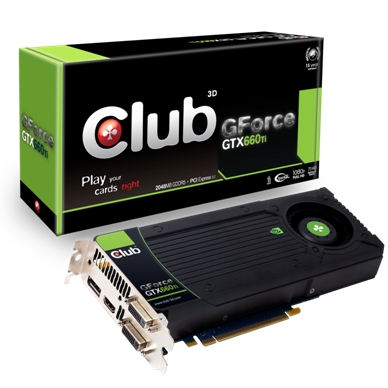 Club 3D GeForce GTX graphic cards are the standard for amazing graphics, introducing today the latest addition to its GeForce 600 series. The GeForce GTX 660Ti adds a new dimension to the game-changing Kepler-power family of graphic cards by delivering the ideal combination of performance, power efficiency, and affordability. It’s a must-have upgrade for today’s hottest and most demanding games.

Get game-changing DirectX 11 performance with the GeForce GTX 660Ti, featuring the next-gen Kepler architecture for a fast, more realistic gaming experience, highly detailed, lifelike characters and environments with full DirectX 11 support. Upgrade from your old DirectX 10 graphic card and boost performance by up to 6x* and get twice the power efficiency as previous generation** GeForce graphic cards.

NVIDIA's Kepler GPU architecture has been designed from the ground up not just for maximum performance in the latest DirectX 11 games, but optimal performance per watt. The new SMX streaming multiprocessor is twice as efficient as the prior generation and the new geometry engine draws triangles twice as fast. The result is world class performance and the highest image quality in an elegant and power efficient graphics card.

Compared to the original Fermi-SM, SMX has twice the performance per Watt. Put another way, given a Watt of power, Kepler's SMX can do twice the amount of work as Fermi's SM. And this is measured apples-to-apples, on the same manufacturing process. Imagine a conventional 50 Watt light bulb that shines as brightly as a 100 Watt light bulb—that's what Kepler's like when gaming.