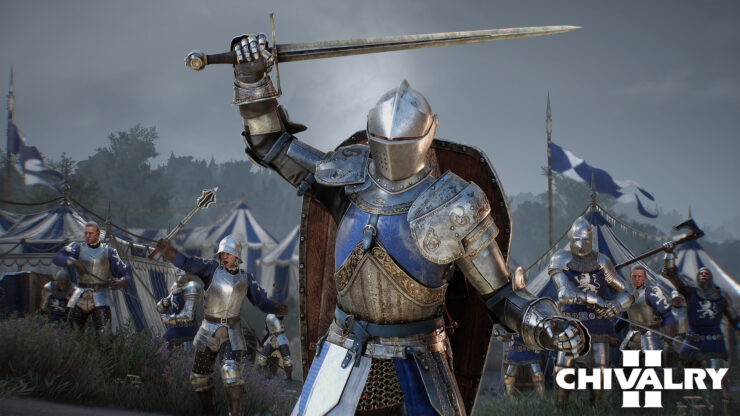 One of the announcements from the PC Gaming Show at E3 2019 was the upcoming release of Chivalry 2 next year on PC (as a one-year Epic Games Store exclusive).

While the game wasn't playable yet at this year's E3, we did manage to speak with Torn Banner's Brand Director Alex Hayter about Chivalry 2 and what this project means to the Canadian studio.

How did the community react to the announcement of Chivalry 2?

Early reactions have been super strong. Torn Banner and Chivalry go together, that's what we are known for. So far it's been great. The first one came out in 2012 and Chivalry 2 is coming out in 2020, with an eight-year gap, which means that we're able to show a pretty massive bunch of improvements.

The first Chivalry was, in a lot of ways, made by an amateur team. We came from the modding community with Age of Chivalry and decided to make a proper retail game. But in a lot of respects, you know, we were a younger, inexperienced team and the first Chivalry is the first game that we've ever properly made. And now we have a lot more experience behind us. We have also hired a lot of AAA talent. So, yeah, we're excited to bring what we feel like a true sequel and essentially realize the vision we had for the first game, but maybe didn't quite achieve at the time. We know that the community feels strongly about the first Chivalry, we achieved something special there but it also fell short in some areas. One big area of improvement is the sense of scale, as the first game was built as a maximum 24 player game, right? The player count got bigger later on but the maps were always designed for 24 players from the beginning. In Chivalry 2, on the other hand, we have built all the maps around the much larger size of 64 players.

What does that mean in terms of combat balance?

Yeah, it becomes a pretty interesting little new kind of game where there are so much bigger areas and armies. Players can expect a similar sort of set of classes to the previous entry and we are putting a huge focus on balance in terms of the feeling of combat for Chivalry 2. That was one of the major feedback points of the first game.

We're known as sort of inventing the genre, but there were elements we weren't satisfied with, it was often hard to take on multiple opponents at once, it was often hard to read the combat moves of an opponent, they could have been doing crazy stuff that you didn't always understand. Combat will read better in Chivalry 2, making it viable to take on multiple opponents at once. It's not just a dueling game between you and another foe anymore. You'll be able to have someone coming at you, block them and have enough time to react and attack another person. Taking on multiple opponents is a major advancement. And then just all of that kind of the crazy ballerina moves, none of those things are possible in Chivalry 2. It's a much more natural looking game in terms of the combat and it feels more fluid as well.

We think we're really nailing that action as well as truly achieving the vision of the medieval era the first game attempted. Heavy inspirations for the game were movie battles. For example, if you know the Battle of the Bastards from Game of Thrones, we're basically trying to recreate that in Chivalry 2, making players feel like John Snow, hero on the battlefield.

Can you divulge how many maps will be available at launch in Chivalry 2?

We're not talking about how many maps we'll have in total yet, but there will be plenty and they'll have multiple objectives. As you're moving through the multi-stage maps, we tell the story as you're going through. For example, in Chivalry you had to push the corpse wagon to poison the enemy water supply. Again, we're taking that idea and just basically dialing it up to eleven. Just much more massive maps, you can see the huge castle in the trailer and this is actually the smallest castle that we have in the game. So that looks pretty big. What we're doing is massive fortresses. We like the idea of sieging King's Landing (from Game of Thrones) and getting that level of scale in the battles.

Are there any plans to add a built-in voice chat system in order for teams to coordinate?

We are exploring various voice chatting options for sure. A lot of the teamwork in the game comes from the design itself. So you'll be spawning in a wave of people at once so we want to capture the feeling of rushing into battle surrounded by it. And we're also really expanding on the personality of Chivalry and the communication that comes from that, Chivalry had voice lines where you could chop off someone's arms and the character would say 'Oh, sorry about that'. So we're taking all that text and again, dialing it up with thousands of new voice lines that are also an important way to communicate with your allies.

Will Chivalry 2 feature any 'squad system'?

We're not really talking about those aspects today.

Alright. How about any PvE mode, such as a Horde mode? Is there any interest in exploring that?

To me, that's an awesome idea and definitely something we're interested in, though we're not talking about any such things today. We'll have more information later down the road.

How did the partnership with Tripwire come about?

We've known Tripwire for years, basically since before we released Chivalry. The presidents, in particular, Steve Piggott (Torn Banner) and John Gibson (Tripwire) have known each other for a long time. It's an exciting creative partnership. Tripwire is known for its big games like Red Orchestra or Killing Floor and the overall knowledge they bring to the table. We're obviously known for capturing the romance of the medieval era. We see it as being like a supergroup kind of partnership. For us, it's just an awesome way to sort of pool our resources together to make the best and the biggest sequel that we can.

Chivalry 2 will be exclusive to the Epic Games Store for one year. Can you talk about that?

Yeah, that's the decision that we made. A lot of it is about the monitoring game for us, too. Thanks to our relationship with Epic, we have certain knowledge that is not public about the Epic Games Store and how it's going to look when we launch in 2020, but we're really confident that they are going to be developing an awesome store for us to be launching on. We're pretty confident that the Epic Games Store will be in a great place, but also just more importantly Epic has been awesome for us over the years, we've used Unreal Engine 3 for Chivalry and Unreal Engine 4 for Mirage: Arcane Warfare. We know that they're amazing at providing tools to developers to make awesome games. So everything about this deal basically means that we can make the best game possible. It's just an awesome opportunity. I think that the fans in the community will eventually understand.

Since you're focusing on the PC platform first and you're powered by Unreal Engine 4, have you considered adding real-time ray tracing?

It's something that we think is amazing, the way that metal looks in our games could lend itself pretty well to it. We're not talking about what we'll use in terms of technology today, but we are paying attention to these things.