Mirage: Arcane Warfare is looking to mix things and break away from the visceral realistic combat of Chivalry: Medieval Warfare with its unusual fusion of melee and magic which results in truly chaotic battlefield moments.

Torn Banner has managed to up the ante as far as combat is concerned with the inclusion of magical abilities for each of the six classes. If you’re new to the Warfare games, Mirage: Arcane Warfare is an online classed based first-person combat game that focuses mostly on melee combat with some magic thrown in for good measure.

If you’ve played Chivalry: Medieval Warfare, know that Mirage expands on that combat in interesting new ways. Characters classes play a much larger role this time around as they provide drastically different gameplay options depending on what your team composition needs at any given moment.

Even with the inclusion of magic, the skill part of Arcane Warfare lies with how well you can parry and deflect attacks. I highly recommend going through the tutorial to get a sense on how and when to parry attacks. It takes time and often feels like you’re always a split-second too early or too late in your first few matches. Things get even more complicated when ranged spells get thrown into the mix. Good players will always think and play defensively while newbies can be spotted easily by how much they are spamming attacks and spells.

Mirage: Arcane Warfare is a team-based game. While you can go at it solo, it’s a far better idea to work with a group that best compliments your class. Powerful melee classes like the Taurent are nearly unstoppable when paired with a decent support class like the Vigilist who can drop a dome barrier on their allies, nullifying any ranged attacks that head their way.

Speaking of classes, the best thing about Mirage: Arcane Warfare is how wildly different each class plays from each other. What’s even more surprising is how much of a blast it was to play classes I wouldn’t normally gravitate towards.

I’ve been spending a ton of time with The Tinker, whose traps spells like Mine and Stasis are perfect for defense on game modes where you must hold control points. Her, along with the Alchemancer are great choices for players who figured out they'd rather avoid close-range combat. The Alchemancer is a ranged spell caster who can float and launch fireballs, while the Entropist uses a magic carpet (seriously) to zip around the map looking for the perfect opportunity to launch an attack.

If you care more for up-close and personal combat, the quick Vypress can easily overwhelm opponents with a flurry of sword strikes and dash attacks. The Taurant falls into the bruiser category as their giant mace can easily crush those who aren’t paying attention. Lastly, the Vigilist uses a spear/shield combo that I find is the easiest of the melee classes to pick up.

The steep learning curve may turn off some players, considering the tutorial (which, again, I highly recommend doing) only covers one character class. This means the only real way to learn the game is trial by fire. If you don’t know what you’re doing it's easy to get frustrated especially since team-killing is a very common occurrence, particularly with new players who aren’t well aware of their classes attack range or spell splash damage. Just be ready to annoy some teammates when you accidentally hit them with a fireball.

Mirage offers a sizable amount of content at launch, with 27 playable maps spread across 6 game types. You’ve got the standard 10v10 Team Deathmatch with traditional modes like capture the flag or holding territory. Much like in its Medieval predecessor, Mirage: Arcane Warfare relies on holding certain choke points on the map and learning where it's possible to set up an ambush.

I found the lack of matchmaking options pretty disappointing. There aren’t even any ranked matches yet, so your fun will vary on what’s available on the server list. As a result, there were too many matches where one team was completely decimating the other. The low player count is definitely a factor in how much you will enjoy your session. When teams are balanced and the voice-chat helpful, a match in Mirage: Arcane Warfare can feel and play great. Those moments just felt too few and far between for now, though.

The mode I found most compelling is Arena, a 3v3 battle. The smaller mode on smaller maps allows for more intimate and deliberate fights where team composition is just as important as how you play. Coordination is more manageable and the victory feels a lot more rewarding than in bigger modes.

This isn’t to say that the larger battles are bad, they just often turn into a big mess of fireballs and severed limbs. It’s easier to lose your bearings and often super annoying to engage in a one on one that’s cut short because someone hit you from behind with a floating rock or something.

The characters along with the rich fantasy-Arabian aesthetic add a lot of flair to the combat. The loot system allows for some fairly deep character customization. Taunts are back and they are as obnoxious and hilarious as ever, especially when you lose/win a duel. There's a ton of personality and fights are always fun to watch and take part it.

Mirage: Arcane Warfare is a unique game with a great setting and fun, rewarding combat if you’re willing to spend the time to learn. Chivalry: Medieval Warfare fans might be turned off by the addition of magical abilities as this game greatly steps away skill-based melee combat and focuses on cool-downed special moves like an MOBA. I applaud that Mirage created a wholly original albeit flawed new IP and it makes it curious to see what Torn Banner Studios does in terms of new content and updates.

Review code provided by the publisher. The game is available on Steam and there are several Mirage-themed bags available for purchase via Amazon, in case you're into that sort of thing. 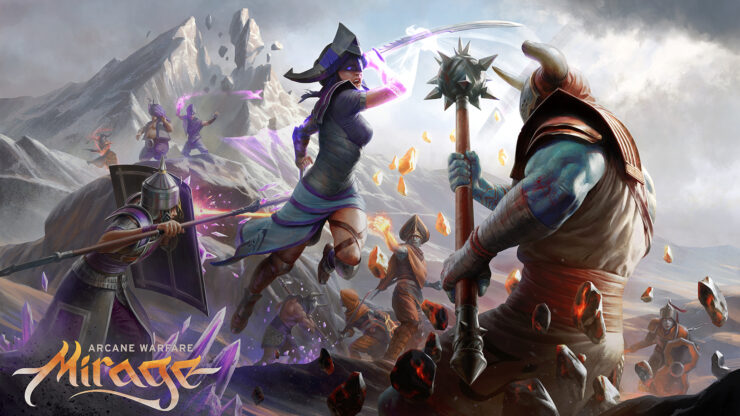 The steep learning curve paired with the limited tutorial, lack of any significant matchmaking options and the currently low player count make it hard to recommend Mirage: Arcane Warfare to anyone who isn't already a fan of their previous game Chivalry: Medieval Warfare. There's a lot of room to improve, though.