Chinese government is apparently phishing iCloud info with man-in-the-middle attacks. Reports claim that Apple is now being the recent victim of Chinese government hacking attempts falling in line of previous big tech corporations like Microsoft and Yahoo. The government is reportedly using the infamous China's institutional firewall to redirect traffic coming at iCloud.com to a fake but resembling page with similar interface in an attempt to get account information and stored content. 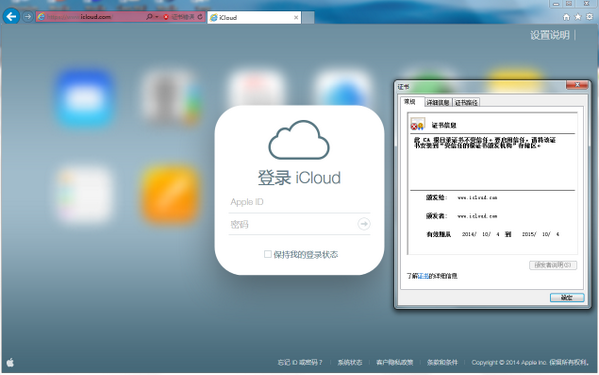 This is a typical phishing attack where the redirected page is created to resemble the interface of original tricking users in giving up their account information. Chinese government is apparently using this MITM attacks to intercept usernames and passwords of iCloud users. This would further help the authorities to get stored data on the iCloud including photos, contacts, and messages. Reported by GreatFire, the attack seems to be intended at Chinese users and is apparently a nationwide hacking attempt coinciding with Apple's launch of 6th generation iPhone in the country today.

China has remained notorious for being an authoritarian regime keeping a very strict control over Internet for its citizens. From social networking sites to search results, authorities keep a keen eye on what the Chinese users are accessing on the Internet. GreatFire reports that the latest attack on Apple could be to access photos and videos in the wake of Hong Kong protests.

While the attacks on Google and Yahoo enabled the authorities to snoop on what information Chinese were accessing on those two platforms, the Apple attack is different. If users ignored the security warning and clicked through to the Apple site and entered their username and password, this information has now been compromised by the Chinese authorities. Many Apple customers use iCloud to store their personal information, including iMessages, photos and contacts. This may also somehow be related again to images and videos of the Hong Kong protests being shared on the mainland.

While the report hasn't been confirmed from other sources, it carries a huge implication on Apple's relationship with China which has become quite a friendly one in recent months. GreatFire is recommending Chinese users to use trusted browsers like Chrome and Firefox which prevent users from accessing phishing accounts and detecting if a site if suffering from  MitM attack.

For more details on the attack, please visit Great Fire.