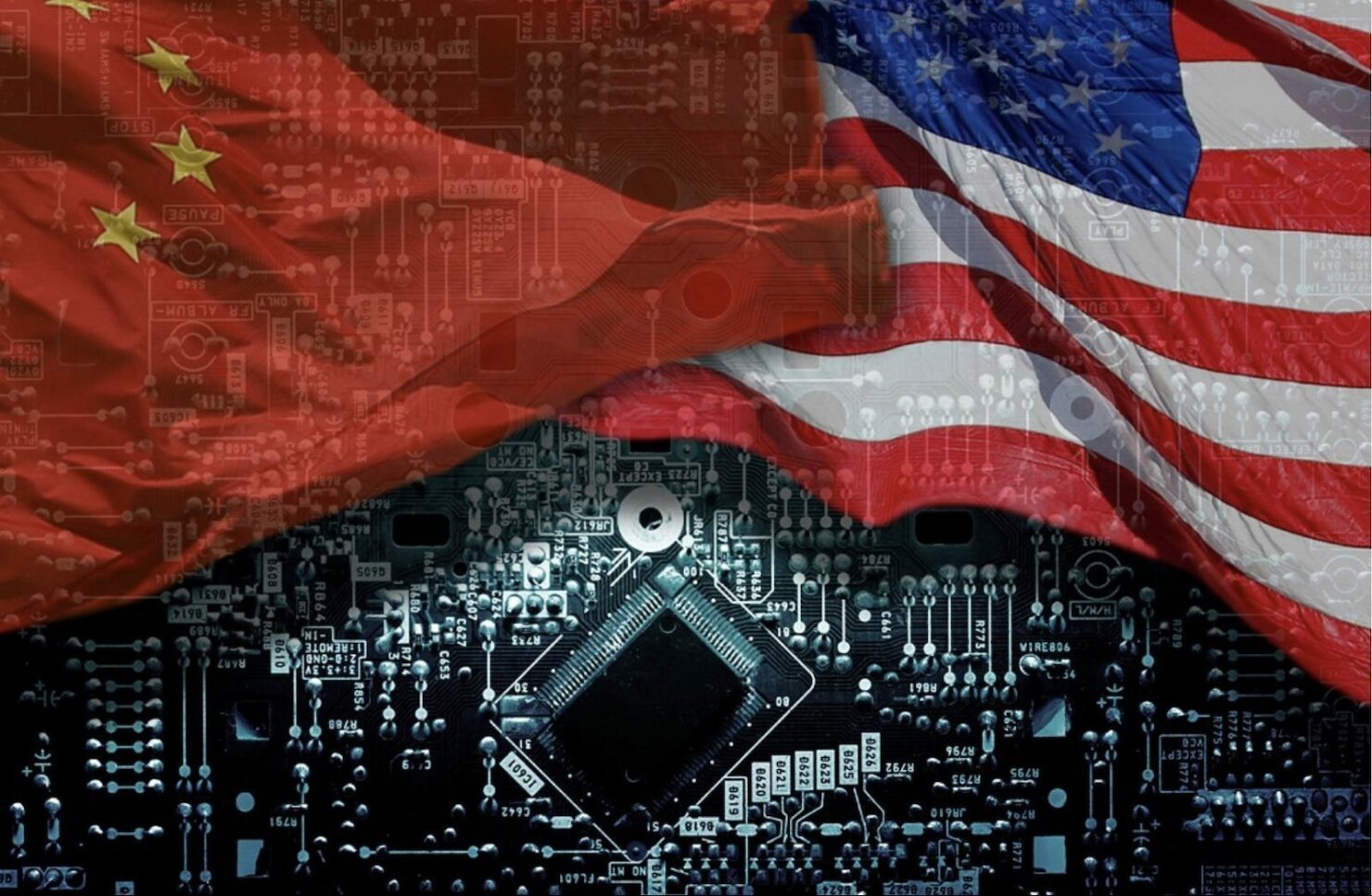 A tough stance by the American government has also sped up efforts by the Chinese government to decrease its reliance in key manufacturing sectors, including chip fabrication, on U.S.-source technology; efforts that have so far resulted in Chinese firms raising $38 billion capital according to estimates by S&P Global Market Intelligence, and veteran American chip design tooling engineers and executives leaving for China either to start new companies or join existing ones.

A fresh report from GlobalData points out that despite the U.S. chip ban, Chinese efforts to secure a lead globally in manufacturing products that sit at the heart of every tech device have only sped up. In fact, the details suggest that in addition to speeding up research and development efforts and investments for developing a strong local fabrication industry, the country will also leverage its geopolitical investment strategies to quantitatively secure data to create a strong artificial intelligence sector as well.

Owing to the highly complex process of printing minute circuits on a piece of silicon, manufacturing chips involves a large supporting industry in addition to traditional fabrication companies such as the Taiwan Semiconductor Manufacturing Company (TSMC) and Intel Corportioon. This industry provides the manufacturers with materials such as chemicals that clean the silicon wafers multiple times during the manufacturing process, photoresist elements that form the material that is transformed into circuits through lithography and 'masks' that form the design basis of the final integrated circuit.

So while the latest lithography machines, that use ultraviolet light to reduce circuit size over their predecessors, are subject to U.S. sanctions owing to American-source technology being present, the supporting industries are not limited to such an extent.

At this front, a host of Chinese firms are already operating with companies such as Beijing E-Town Semiconductor Technology, Shenyang Kingsemi and AdvancedMicro-Fabrication Equipment Inc. China target fabrications segments such as those involving the heating of the silicon (laser annealing) to change its form after its electrical conductivity has been altered, involving glue development and covering the final process in fabrication, 'etching', which transforms previously deposited materials into the circuits. 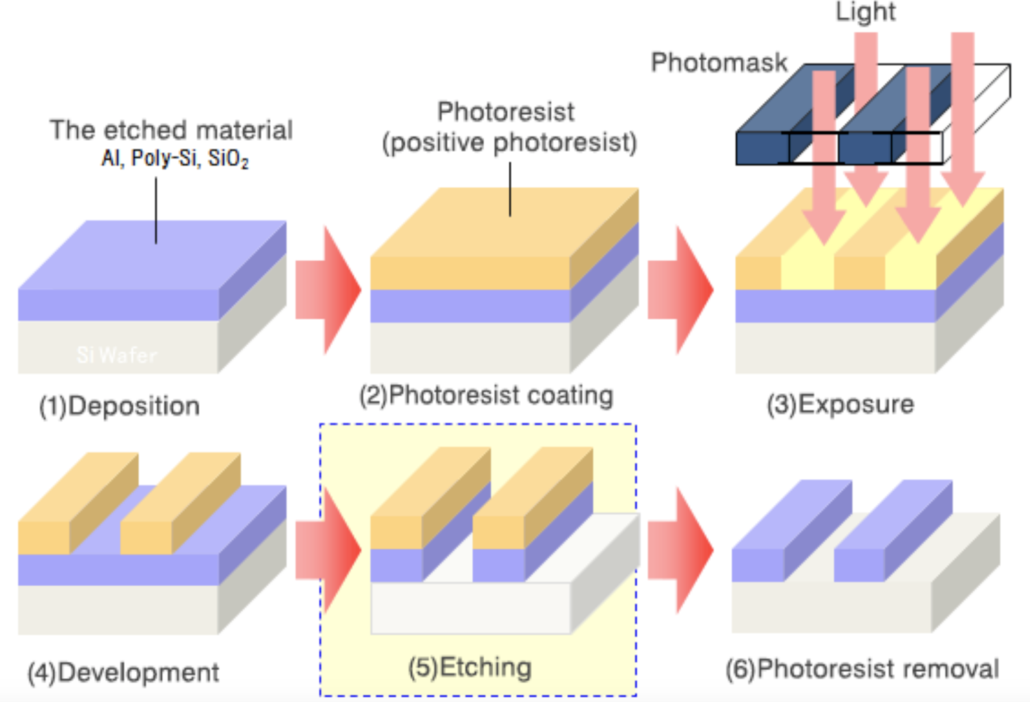 The process of manufacturing a chip is simplified. Dry etching is shown in the fifth step, where previously deposited material is removed, often through plasma lasers. Image: Hitachi High-Tech Global

In addition to manufacturing, tools that are used to design the billions of circuits that form the backbone of today's chips are also the focus of the Chinese government. While Chinese companies, Cellixsoft, Primaruis and Empyrean Software have been operating for more than a decade, development in the design segment has picked up recently.

This resulted from American sanctions against Huawei that prohibited the company from accessing design tools using American-source technology. As a result, several new startups have sprung up, according to Nikkei. Three of these, X-Epic, Shanghai Heijan and Advanced Manufacturing EDA Co., (Amedac) are either founded by former employees of the Chinese division of American EDA company Synopsys or consists of senior officials formerly belonging to Synopsys China or Cadence Design Systems. Inc, another American software company. Synopsys also holds a 20% stake in Amedac, with the American firm's chairman of Chinese operations serving on Amedac's board of directors.

GlobalData analyst Danyaal Rashid also believes that currently, China is facing a shortage of 400,000 experts in semiconductor fabrication. This statement reflects concerns that are already present within the Chinese government, as the country's cabinet promised more funding for related fields in university degrees in July this year. This also mirrors a shift towards academic talent by Huawei, who is paying up to $300,000 annually to qualified researchers.

Yet even as China steps up its efforts to remain globally competitive in the semiconductor arena,  its rivals are looking to the future. TSMC, which supplies tech bigwigs such as Apple Inc (NASDAQ:AAPL) and NVIDIA Corporation (NASDAQ:NVDA)with chips, is expected to capture 60% of the advanced process node market by 2021 according to estimates by research firm TrendForce. American sanctions against Huawei have affected TSMC's production capacity for the latest 5nm manufacturing process, with TrendForce believing that roughly 10% to 15% of TSMC's capacity for 5nm will be left unused by the end of this year.

TrendForce goes on to state that this shortage will continue throughout 2021, with orders from Qualcomm Incorporated (NASDAQ:QCOM), NVIDIA, AMD, MediaTek and most importantly Intel Corporation (NASDAQ:INTC)expected to compel TSMC to expand its 5nm production capacity as the year ends and 2022 follows. During this time Apple will have moved forward to the 4nm node, which is based on the same design rules as 5nm for its A16 system-on-chip for the iPhone.