Chatting With Creators – The Man Behind the Soundscape of Star Citizen

Music can be a most important part of a game, adding or subtracting from the overall atmosphere, and if the music doesn't fit correctly, it can seriously detract from the experience, ruining it. Over the past few years we've seen an influx of great composers able to weave together some fantastic soundtracks that could equally be considered masterpieces in their own right, without an attached franchise.

Of course Star Citizen is no exception and the music we've been able to hear thus far in the game has been exceptional. It's all original, and decidedly sci-fi in nature. We've been lucky enough to be able to ask the composer of the official Star Citizen soundtrack, Pedro Macedo Camacho, a few questions about this and other projects of his.

Sitting down with a musical maestro

Pedro Macedo Camacho is a classically trained music composer that has had his works in film, TV and games. Our readers might recognize his music best from The Witcher 3: Wild Hunt, Civilization 5 and of course Star Citizen. He's been nominated for a Golden Reel award for his work on Star Citizen and has had a song of his from 1954 Alcatraz nominated for best song by the National Academy of Video Game Trade Reviewers. You can find all his music here.

You've had a long history of composing original music for games, but what initially got you interested in composing music for video games? Did anything specific draw you into the medium?

I started playing games at the age of 3 (1982!), in a ZX Spectrum 48k, so games have always been part of my life. My interest in music started with film music, 80's pop and classical music. My father was a former radio announcer and he absolutely loved music so we have a very large portion of our living room dedicated exclusively to hear music. There was no TV, no Computer, no nothing, just a very good Hi-Fi system and someone (my father) with a very good taste in choosing what I should hear. And I spent hours there, just listening. Also at a very young age I saw Star Wars for the first time and, as you can imagine, I loved its music and sound. In fact I loved to mimic Darth Vader's breathing sound so much I decided to be Vader in Carnival!

I still remember that day, it was probably the only time Carnival didn't seem boring to me! In the late 80's a new computer came to our house, to replace Commodore 64: the fantastic Commodore Amiga 500, which had awesome audio capabilities, way ahead of its time! 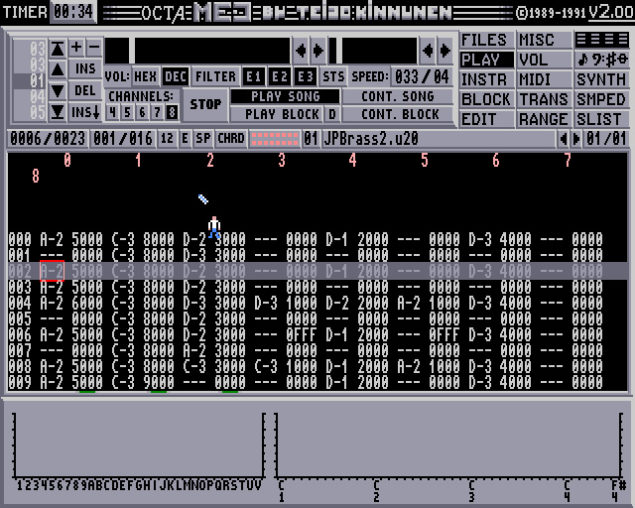 On that computer I started to explore a tracker called Octamed PRO and it was with this software that I composed my first track ever. This curiosity to compose happened at the same time as my father was diagnosed a brain cancer. He was able to hear my first ever composition only because he passed away shortly after but even though I am pretty sure it was crap he praised it and that motivated me to keep going. This experience made me sign up in the local conservatory and study classical composition for many years with several composition masters. So music (classical, pop, metal, rock, soundtracks), video games and films were always a constant part of my life and it would only make sense to create music for those mediums. I do have a secret to share, I started playing games and watching movies with my father when I was 3 and I still play games everyday at 36 and watch movies every week! So I was never drawn into video games, I was born with it... I decided to be a composer because of the music I composed in Amiga and showed to my father!

With the huge success of The Witcher 3 and even of Star Citizen so far, do you get a little stage fright about repeating and continuing the excellent work you're known for? It's definitely a very high bar that you've set, with a high standard of quality.

I compose because I humanly need to do it. It is not a business or a profession to me, it is a part of my life. All my music is honest and comes from my inner heart so I am not afraid to show it. The more I learn the more I realize that I know so little... I feel my bar is still very low to what I hope to someday achieve. I just believe that with hard work and experience I may someday achieve a place where I am satisfied with what I do.

How does the overall story and huge overarching atmosphere of Star Citizen effect how you've chosen to compose the soundtrack thus far?

I try to split the project into smaller portions and focus on what each portion needs to portrait in music, according to Chris creative view. I feel, however, that much of my music came way before the world of Star Citizen was completely defined and was used to (hopefully) inspire them into creating the world. For example, the Star Citizen Main Theme (currently placed in the launcher) was composed back in 2012 when the game was just started!

What sort of inspiration have you drawn from for the Star Citizen soundtrack?

How do you deal with "writer's block" as a composer?

I almost never have them! 🙂 If you have a good composition and counterpoint technique most of the time you can solve the most difficult situations.

Seeing as you're career has spanned some fantastic games and other great original works, what does the future hold for you?

I don't see myself ever going away from concert music or video games and I have been working on some films. I believe in long term relationships and I would love to find in the next few years the ideal director that would team up with me and create beautiful meaningful films hopefully with a fantastic new SciFi IP for the big screen. There is nothing more beautiful in the film history than the long term director/composer relations. That is when magic happens! Can you think about Star Wars without John Williams? and can you think about John Williams without Star Wars? no, it is a perfect symbiosis and that happens because there was magic.

And of course, are there any sneak peaks of the Star Citizen soundtrack that haven't appeared elsewhere that you can share with us?

I wish I could share with you but I can't!! 🙁 I can tell you that I am VERY happy with what I did for the Sataball mode for the FPS module on Star Citizen. I can't wait for it to go public! Thank you for the interview!​

Thank you for taking the time to answer these questions, it's been a pleasure. We can't wait to hear the rest of your work from this an other projects. Good luck in your endeavors Pedro!