And I am back folks! Yes, this was one month’s absence that consistently reminded me of Wccftech team and our great readers. So how about charging your Samsung Galaxy S III, not with a cable, but wirelessly? Well, when it is Android, anything is pretty much possible and the geniuses over at XDA have proven this claim right again. For those who don’t quite get it, with a hack and some handy alterations, you can now easily charge your Samsung Galaxy S III over a charging dock! This basically eliminates any needs for cables connected to adapters or your computer's USB ports.

The credit for unleashing this wireless charging modality to the outer world goes to Android94301, senior XDA member and hacker. According to the originator of this wireless charging hack for Samsung Galaxy S III, all you will need is 5 minutes of your precious time bundled with $ 17 to $ 19 worth of goodies that you’ll need to do the deed. 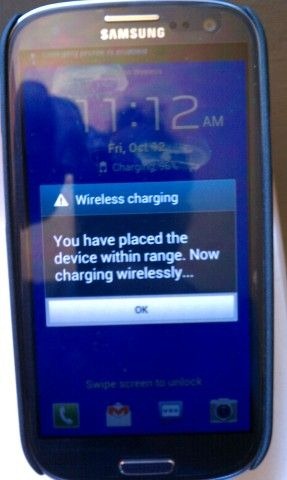 The wireless charging mod for the Samsung Galaxy S III isn’t exactly new. It dates back to September 2012 but for one reason or the other; it just got better. Personally, I hate DIYs that involve soldering or monkeying with the circuit at any point. However, this mod doesn’t require the users to solder any circuits or to carve anything new. In fact, the hack requires you to be careful enough to handle a knife ( even a plastic one will do, according to the mod creator) and to aptly apply scotch tape.

I certainly believe that this one’s a great utility for anyone who like to keep their phones chic and try out new stuff. The instructions are fairly lengthy, but at no point you’ll find them confusing ( at least true for me). So in case you want your Samsung Galaxy S III to charge wirelessly, then head to the official XDA Galaxy S 3 wireless mod charging thread posted here and get it done in 17 $ + 5 minutes.

Again, just for the sake of putting it through, you’ll be on your own if you screw this up. So ensure that you proceed only after you have read the whole procedure and are comfortable handling it.