Scientists over at the Large Hadron Collider (LHC) in Switzerland have discovered a new type of particle which they have called a pentaquark, the discovery of this new particle has solved a 50 year old puzzle about the building blocks of matter. The discovery was made on the 14th of July during an LHCb experiment at Conseil Européen pour la Recherche Nucléaire, no I don’t have the slightest clue how to pronounce that, which is more commonly known as CERN. A report on these findings has been submitted to the journal Physical Review Letters

“The pentaquark is not just any new particle,” said LHCb spokesperson Guy Wilkinson. “It represents a way to aggregate quarks, namely the fundamental constituents of ordinary protons and neutrons, in a pattern that has never been observed before in over fifty years of experimental searches. Studying its properties may allow us to understand better how ordinary matter, the protons and neutrons from which we’re all made, is constituted.”

There have been theories about this particle since the 1960

The particle was predicted to exist in the 1960s but it seems that the pentaquark had been eluding scientists since then, until its detection at the LHC, a similar story to that of the Higgs Boson particle. In 1964 the structure of matter was revolutionized when two scientists, Murray Gell Mann and George Zweig, individually proposed that there exist subatomic particles which are known as quarks. They theorized that a category of particles knows as baryons, consisting of neutrons and protons, are made up of three fractionally charged objects known as quarks, while another category of particles known as mesons are made up of quark-antiquark pairs. George Zweig chose the term 'aces' but it was Gell Mann's coined term 'quarks' that stuck, Murray Gell Mann won the Nobel Prize in Physics for coming up with this theory in 1969. Until this experiment no conclusive evidence of pentaquarks had been seen.

During the mid 2000s several teams of scientists have claimed to discover pentaquarks but none of them could give any conclusive evidence and their discoveries were undermined by other experiments.

"There is quite a history with pentaquarks, which is also why we were very careful in putting this paper forward," Patrick Koppenburg, physics co-ordinator for LHCb at Cern, told BBC News.  "It's just the word pentaquark which seems to be cursed somehow because there have been many discoveries that were then superseded by new results that showed that previous ones were actually fluctuations and not real signals." 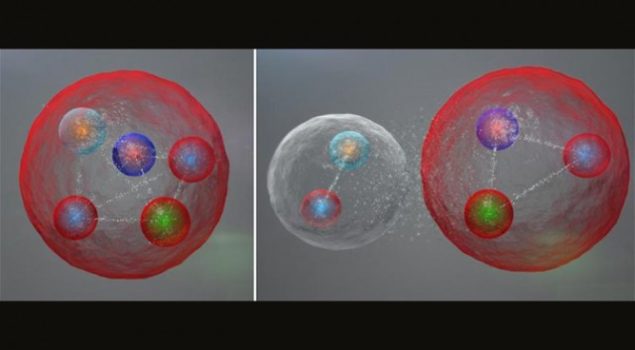 The press release at CERN gives a brief description of the new discovery:

LHCb researchers looked for pentaquark states by examining the decay of a baryon known as Λb (Lambda b) into three other particles, a J/ψ- (J-psi), a proton and a charged kaon. Studying the spectrum of masses of the J/ψ and the proton revealed that intermediate states were sometimes involved in their production. These have been named Pc(4450)+ and Pc(4380)+, the former being clearly visible as a peak in the data, with the latter being required to describe the data fully.

“Benefitting from the large data set provided by the LHC, and the excellent precision of our detector, we have examined all possibilities for these signals, and conclude that they can only be explained by pentaquark states”, says LHCb physicist Tomasz Skwarnicki of Syracuse University.

Many LHCb physicists have examined all possibilities and they all have come to the same conclusion that the signals can only be explained by pentaquark states and nothing else. Dr Koppenburg who saw the signal first emerge in 2012 said that they are transforming everything from a one dimensional problem to a five dimensional one and that way they are able to show everything that happens in the decay, and according to him there is no other explanation of what was going on other than the addition of a new particle that had remained unobserved.

More studies will be done on this new particle that will answer all questions about the pentaquark, LHCb will collect new data in its LHC run 2 which will further clarify all remaining questions that scientists have.